An edited version of this article was published in The National. 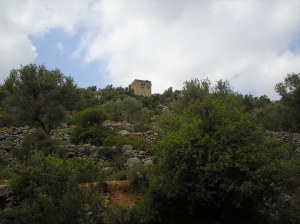 We entered Palestine from Jordan, across the Allenby Bridge and over the trickle which is what’s left of the diverted, overused, and drought-struck river. The Dead Sea glittered in the hollow to our left. Jericho, the world’s oldest city, shimmered through heat haze to our right. The site where Jesus was baptised was a stone’s throw away. Palestine is most definitely part of bilad ash-Sham, in the same cultural zone as Syria, Lebanon and Jordan, but it is also most definitely like nowhere else on the planet. Suddenly the superlatives were coming thick and fast.

Palestine feels as large as a continent – but one that’s been crushed and folded to fit into the narrow strip of fertile land between the river and the sea. The Jordan Valley depression is the lowest point on earth, part of the Rift Valley which stretches from east Africa, and it’s as hot as the Gulf. But only a few miles up from the yellowed, cratered desert into the green hills before Jerusalem, and the weather is very different. As we left our performance in Ramallah a couple of nights later, gusts of fog blew in on an icy wind. If a Palestinian in the West Bank manages to find an unoccupied hilltop – which isn’t at all easy – he can look all the way to the forbidden Mediterranean, and perhaps he’ll pick out the fields of his ancestral village.

I was there as a participant in the Palestine Festival of Literature, the brain child of the great British-Egyptian novelist Ahdaf Soueif. I was delighted and somewhat humbled to be in the company of so many wonderful writers and publishers, among them Python and traveller Michael Palin, best-selling crime novelist Henning Mankel, Pride and Prejudice screenplay writer Deborah Moggach, and prize-winning novelists Claire Messud, MG Vassanji, Jamal Mahjoub and Abdulrazak Gurnah.

Because Palestinians have such difficulty moving from one town to another, Palfest moves, as best it can, to its audiences. We travelled between Jerusalem, Ramallah, Bethlehem, Jenin and al-Khalil/Hebron. The unpleasant business of the checkpoints – each one harder work than an airport – made these cities feel almost like separate countries. In Bethlehem I met Sawsan Shomali, a professor of English Literature, who hasn’t been allowed to enter Jerusalem, the city of her birth, in fifteen years. Yet Jerusalem is walking distance from Bethlehem.

It goes without saying that Palfest was unable to reach Gaza, although the authorities there invited us.

One of the week’s highlights was hiking with Raja Shehadeh, author of the humane book “Palestinian Walks”. In an area where Palestinians are forbidden to ramble without a permit, our straggling party nevetheless wound between ancient olive trees and up a terraced slope to an old ‘qasr’ – the Arabic word means ‘palace’ but this was a stone summer shelter for the olive-picking families. Yet ‘palace’ didn’t seem a misnomer. Down at the village of Ain Qenya there are gardens of figs, prickly pears and mulberries. The matriarch of the first home we came to rushed to fill us a bottle of spring water, while her husband rolled me a cigarette of his garden-grown tobacco. If you close your eyes to the omnipresent signs of occupation, life feels close to perfect here, for a few seconds, and the Palestinians become kings of beauty.

But open eyes cannot avoid, anywhere in Palestine, the fortified settlements claiming every high point and ridge, collectively forming an architecture of intimidation to shadow the valley-huddled Palestinian towns, villages and shanties. Juxtaposed with the reality, Obama’s concern to stop further settlement construction appears belated, to say the least. Very little of Palestine remains, and what remains is damaged. Instead of making the desert bloom, Zionism has vandalised the hills. The earth is being churned up at great speed by roads started and abandoned, roads closed entirely and others allocated only for settler use. Suad Amiry, the very funny author of “Sharon and my Mother-in-Law”, talked in Ramallah of becoming lost in her own town after the passage of only a week, such is the constant change imposed on the topography.

Fenced and barricaded, the landscape is as traumatised as the children we heard about in the youth club of Bethlehem’s Aida camp, children who have witnessed their fathers being beaten by soldiers in the torn night hours. A giant key hangs over the camp’s entrance, symbolic of the homes fled in the ethnic cleansing of 1948 (Aida means ‘Returning’, and many men in the camp are called Ayid, or ‘returner’), and the giant separation wall looms over the camp’s claustrophobic alleyways. This wall, and its panopticon towers and cameras, makes for a special atmosphere. Palfest participant Jeremy Harding describes it well: “To be on the West Bank is to feel like a walking X-ray or a tagged convict, monitored in high places.” As well as a resulting mild paranoia, I felt a Kafkaesque dislocation. Aida camp was in some ways reminiscent of Yarmuk camp in Syria, where I’ve spent many happy hours, but yet fundamentally it wasn’t. In Aida, bullet holes decorate the buildings.

For our international group of writers, this was an education, and it was tremendously moving, particularly on the day we visited Hebron/al-Khalil. Most Palestinian population centres are concentrated and surrounded. In Hebron, unusually, 400 gun-wielding settlers, guarded by 1500 soldiers, also occupy the historic city centre. After readings, workshops and a panel discussion at Hebron university, we went to see the results. We walked through streets of shuttered shops and under a mesh ceiling the Palestinians have put up to protect pedestrians from rubbish thrown by the settlers who occupy the upper storeys. People warned us to run, as the settlers sometimes pour urine on those below. We negotiated three checkpoints just to get into the Ibrahimi mosque, where Baruch Goldstein killed 29 Palestinian worshippers in 1994. The delight of any Arab old city is the sensation of freedom it offers; you can disappear under arches, around corners, through dark passageways. But Hebron’s freedom has been robbed by iron gates and concrete blocks.

We experienced further obstruction in Jerusalem. At the entrance to the Aqsa mosque compound our passports were collected by Israeli soldiers who told us we couldn’t go in because the Muslims didn’t want us to. Surreally, even as this excuse was being given, a representative of the Islamic Awqaf – which supposedly has authority over the site – was begging the troops to let us enter. I and some of the Muslims in our party managed to slip in through another gate.

Later I walked through a corner of the Jewish quarter. As this was the Old City I expected to see Palestinian Jews. Instead I saw ungainly new houses where the old had been torn down, inhabited by Ashkenazis, some armed, who did not look happy. It wasn’t Hebron, but it was tense.

So there was a great deal of bad news. Specific to the festival the bad news – beyond five of us with Arab names, me included, being held for five hours by Israeli security at the Allenby Bridge crossing – was the closing, twice, of our events at east Jerusalem’s Palestine National Theatre. The opening night crowd was nosing its way to the seats when a troop of heavily-armed, sunglassed, blank-faced Israeli soldiers muscled in, and ordered us out. With guns at our backs we walked down the street to the French Cultural Centre, and carried on. The incident was reported in the Guardian, Le Monde and the Swedish media, as well as on al-Jazeera. By bristling so at a mere cultural event, it seems the Israelis shot themselves in the foot: which they do a lot these days.

But there was good news too. Despite everything, we had a lot of fun. There was music, inspiration and conversation. There were happy audiences and great meals. At one I harangued Mahmoud Abbas’s chief of staff (Rafik Husseini took it like the gentleman he clearly is), and at another I found myself talking to the heroic Mordechai Vanunu, who told the world about Israel’s nuclear weapon and spent 18 years in prison, 12 of them in solitary confinement, for this service. On that last night, there was even dancing.

The best news was the resilience of the people, whether manifested by organisations like the Hebron Rehabilitation Committee, which restores Old City buildings and offers free services to those families willing to stay under settler pressure, or by islands of free expression such as the Sakakini Centre in Ramallah, where Palestinian-American poetess Suheir Hammad performed. Her poetry is tender, engaged, very particular, and tremendously dynamic. In its attitude and hip hop rhythms it is totally Palestinian and also totally Brooklyn. Suheir’s voice represents a Palestinian culture more than capable of responding to relentless change.

At Bir Zeit university I helped to run a workshop on ‘the role of writing in changing political realities’. I spoke about the alternative media and how websites like the Electronic Intifada as well as personal blogs have begun to positively affect discourse on Palestine in the West. I also noted the explosion of Palestinian creativity now reaching the West, and how this plays a crucial if indirect role in humanising the Palestinian cause. Films like the Oscar-nominated ‘Paradise Now’ and Palestinian-Israeli Hip Hop as much as novels and poetry are breaking the ‘terrorist’ stereotype. When asked to brainstorm their ideas for expressing Palestinian reality through stories, each group of students came up with ideas worthy of production. Beyond Bir Zeit’s lecture halls, all Palestine is bubbling with creative energy and intelligence, and this filled me with hope. A people like this cannot be kept down indefinitely.

Robin Yassin-Kassab is the author of The Road From Damascus, a novel published by Hamish Hamilton.