This is, more or less, a selection from posts I made during the Gaza massacre. 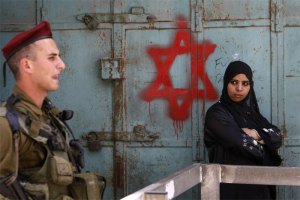 According to the dictionary, obscenity is what is offensive or repulsive to the senses, or indecent in behaviour, expression or appearance.

From Palestine come pictures on the internet, and on al-Jazeera – burning half bodies, a head and torso screaming, corpses spilt in a marketplace like unruly apples, all the tens and hundreds of infants and children turned to outraged dust. A little more out of focus, but concrete, there is the obscenity of starved refugees and cratered farmland, of shriek-soaked hospital walls and babies born at checkpoints. Still further behind these instances, these symptoms, looms the brute and perpetual obscenity of the ancient Canaanite-Arab Palestinian people having been driven from their land into camps and walled ghettoes, where they have been repeatedly massacred. All of this is offensive, repulsive and indecent. The Western media, not wishing to offend our senses, keeps the obscenity quiet. Better put, they cloak the obscenity with the greater obscenity of untruth, of dreaming a pleasant version while people bleed and die.

This should concern everybody, and first of all writers and readers. For the prime obscenity for us here, away from the immediate death and panic, is the language we use to hide the reality of what’s happening. We use magical terms. This is how it goes:

Plucky little Israel, the only democracy in the Middle East, has the right to self-defence. Although the moderate Arab states are developing a more mature outlook, Israel is threatened by anti-Semitic Islamist terrorists. If only there were a Palestinian partner, the peace process could continue until a two-state solution is achieved. Unfortunately, the Palestinians never miss an opportunity to miss an opportunity.

The only democracy in the Middle East. To be generous, Israel is the fourth most democratic state in the region, after Turkey, Iran and Morocco. Israel is an apartheid democracy. The state apparatus rules over a population equally split between Jews and Arabs. The ‘Arab Israelis’ are at best second class citizens, discriminated against by 20 laws and under increasing threat of ‘transfer’ (in English, ethnic cleansing). The Arabs of the occupied West Bank and Gaza have voting rights for a Palestinian Authority which only has the authority to arrest anti-Israel activists. And if the Palestinians dare to vote for anti-Israel activists, their cabinet ministers and MPs are imprisoned, their economy erased, their hospitals bombed. Establishing a state for the Jews in an Arab country and then calling it a democracy has been one of the blackest jokes of modern history.

Here’s another good one: moderate Arab states. Behind the enchanted veil, there are no ‘moderate Arab states’, not unless dictatorship and gangsterism are moderate. Not unless banning Bibles and public floggings and the mass arrests of political opposition and the routine anal rape of detained young men are moderate. Iran is in many respects a tyranny, but it’s far more democratic than any of the ‘moderate’ Arab states. Syria is a a secular and socially liberal state, but it isn’t considered ‘moderate’ in the way that Saudi Arabia, the home of al-Qa’ida, is. The English translation of ‘moderate Arab state’ is ‘client Arab state’ – a state whose regime obeys America and Israel in return for guns and money.

Next: no partner for peace. This means that since the late 80s the PLO and then the Palestinian Authority have repeatedly declared their willingness to accept a state on 22% of Palestine. Hamas too has repeatedly expressed its willingness to abide by any solution accepted by the people, and has said specifically that the conflict would become ‘cultural’ if the occupation of the territories captured in 1967 ends.

22% of their own country. Has any other people through history made such a compromise? But the best the Palestinians have ever been offered (at Camp David 2) was 16%. According to Ali Abunimah, the Israeli map

…depicted a Palestinian ‘state’ in 76.6% of the West Bank, broken into pieces, with all the major settlements remaining in place under Israeli sovereignty. Israel would annex 13.3% outright and continue to occupy the remaining 10.1% for a period of up to thirty years, during which time there would be no restriction on Israel continuing to build settlements and infrastructure….It should be noted that even before these percentages were calculated, the Israelis already subtracted East Jerusalem and the territorial waters of the Dead Sea, so, in fact, the 76% offer was based not on 100% of the occupied territories, but only on those parts that Israel was prepared to discuss. Leaving aside the disjointed nature of this ‘state’, its territory would amount to just 16% of historic Palestine..

When Arafat turned this down, Israelis including the pretend peace camp, with the help of Bill Clinton and the western media, trotted out the lovely polished phrase: the Palestinians never miss an opportunity to miss an opportunity.

The translation of peace process is ‘pacification process’, in the old gunboat sense, as well as ‘cantonisation process’. Settlement building and land theft accelerated during the Oslo years. It was during the Olso years that the embryonic two state solution was strangled.

By now, even if the will was there, a viable partition is no longer possible, and not just because of the ‘demographic problem’ (Arabs breeding too fast) in ‘Israel proper’. Israel-Palestine has one highly integrated transport and water infrastructure. It’s a great infrastructure; the only problem is that many roads are for Jews only, and the water for settler swimming pools rather than for Palestinians to drink. The two state solution is the consensus solution supported by Bush and Blair, Olmert and Barak, Mubarak and Abdullah, and by liberal peace activists the world over. In reality it means official Palestinian acquiescence to bantustan autonomy. Gaza – cramped behind a wall, impoverished and traumatised, cut off from its natural markets – is a good image of what the two state solution would look like.

So we will continue to arm and do business with Israel, to offer expert help in controlling and concentrating Palestinians, and to intimidate and criminalise pro-Palestinian dissent in this country. Israel will continue to speak a discourse of peace. And the Palestinians will resist. Their resistance, even when strictly aimed at military targets, or performed with stones, will be called terrorism. When we accept this nomenclature we will describe Israeli massacres as disproportionate responses. As if it were the ethnically cleansed, the victims of apartheid, the slaughtered and starved who initiate, and Zionism which responds.

In stark contrast to the increasingly vocally split Jewish communities in the West, over 90% of Israeli Jews supported the Gaza massacre. 40% of Israeli Jews believe Jews were a majority in Palestine at the end of the 19th century: an incredible statistic. Most Israeli Jews quite genuinely see themselves as the victims, even when the death count is one Israeli to a hundred Palestinians. In Hebrew as much as in English, magical narrative is galloping, with its grip around our necks, over the cliff.

It’s time for disillusion. Time to recognise the obscenity.