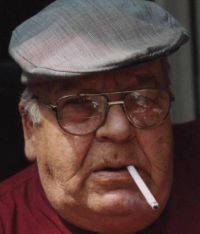 Syrian writer Muhammad al-Maghut was born the son of a peasant farmer in the dusty town of Salamiyah in 1934, during the French occupation. As a young man he joined the Syrian Social Nationalist Party, the second biggest mass party in Syria after the Ba’ath. Like the Ba’ath, the secular SSNP appealed to religious minorities – al-Maghut was of Ismaili origin. Unlike the pan-Arabists of the Ba’ath, it envisaged a fertile crescent state including Syria, Lebanon, Palestine, Jordan, Iraq, Kuwait and even Cyprus. Al-Maghut was locked up on several occasions for SSNP membership. During his first imprisonment – in Mezzeh prison in 1955 – he met the influential poet Adonis and started writing poetry himself.

As a poet he deserves to be much more widely known. Along with Adonis and Nizar Qabbani he was a modernist, using free verse instead of the traditional Arabic forms. Like Qabbani he aimed to be accessible to the ordinary people, but his ‘lover narrator’ is perhaps better suited to our twisted times than Qabbani’s. Certain verses sum up the decadent atmosphere very well indeed. The following remind me of those Gulf Arabs and others who profit from the prostitution of refugee women from occupied Iraq:

Lebanon is burning – it leaps, like a wounded horse, at the edge of the desert/ and I am looking for a fat girl/ to rub myself against on the tram/ for a Beduin-looking man to knock down somewhere. My country is on the verge of collapse/ shivering like a naked lioness/ and I am looking for two green eyes/ and a quaint café by the sea/ looking for a desperate village girl to deceive.”

His collections are Sadness in Moonlight, A Room with Millions of Walls, Joy is Not My Profession, and The Red Beduin. He also wrote fierce essays, such as those in ‘I Will Betray my Homeland’ – great, angry satire, delivered in simple language.

He collaborated with the comic actor Dureyd Lahham – an Arab Chaplin – in the stage plays ‘Kasak Ya Watan’ (Cheers to the Homeland!) and ‘Ghorbeh’ (which means both Estrangement and Expatriation). He wrote the script for the film ‘al-Hudood’ (the Borders), a satire of the self-proclaimed Arab nationalist regimes in which Lahham plays a hapless citizen who’s made the mistake of planning a tourist jaunt through the homeland. He loses his passport between the borders of Westistan and Eastistan and finds himself trapped for so long in no-man’s land that he builds a house and gets married. At one point the media discover his case, which prompts a nationalist politician to visit. “La hudood ba’ad al-yowm!” declares the corpulent politico – No borders from now on! – before jumping into his limousine and being driven away. Our hero continues to wait.

Like Yasser al-Azmeh of the Mariyah situation comedies, Maghut was loved by Hafez al-Assad. This, and his work on the state’s Tishreen newspaper, allowed him to rail uncensored against poverty, corruption, the impotence of the Arab states, and the tragedies of Palestine and Lebanon.

On the final night of Palfest we were asked to read not from our own work but from the work of anyone who had inspired us. The readings were supposed to be happening in the Palestine National Theatre in occupied Jerusalem, but Israeli troops had closed the streets leading to the theatre. We moved to the British Council garden, and I read this great poem by Muhammad al-Maghut.

All the fields of the world
At odds with two small lips
All the streets of history
At odds with two bare feet.
Love,
They travel and we wait
They have gallows
We have necks
They have pearls
And we have freckles and moles
They own the night, the dawn, the afternoon sun and the day
And we own skin and bones.
We plant under the noonday sun,
And they eat in the shade
Their teeth are white as rice
Our teeth dark as desolate forests,
Their breasts are soft as silk
Our breasts dusty as execution squares
And yet, we are the kings of the world:
Their homes are buried in bills and accounts
Our homes are buried in autumn leaves
In their pockets they carry the addresses
of thieves and traitors
In ours we carry the addresses
of rivers and thunderstorms.
They own windows
We own the winds
They own the ships
We own the waves
They own the medals
We own the mud
They own the walls and balconies
We own the ropes and the daggers.
And now beloved
Come, let us sleep on the pavements.