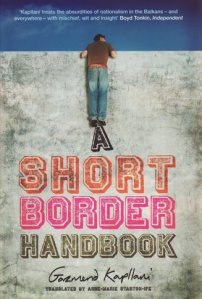 I met Gazmend Kapllani, a Greek of Albanian origin, during a recent visit to Germany (for a British Council ‘Our Shared Europe’ conference). He’s a great conversationalist, so I was pleased when he promised to send me one of his books. A Short Border Handbook arrived this morning. I took it back to bed, planning to read the blurb and perhaps the first chapter before adding it to my enormous pile of books-to-be-read. But I read the whole thing in one go.

It’s not a novel but it feels like one, because it’s so lightly yet densely written, full of stories and humour and therefore with a texture more human than journalistic. Part autobiography, part fiction, part philosophy, Kapllani’s book reminds us that a migrant, unlike a tourist, is the weak pole in relation to his host society, and that the weak are never respected, however hard they work. The Handbook’s general ruminations are applicable to any migrant, but it also addresses very specifically the conditions in Albania in the 1990s which forced so many people to move.

It has the following to say about Enver Hoxha. Examples of other fallen dictators will leap into readers’ minds:

“Tyrants are merciless beasts, precisely because they leave behind distorted societies worn down by oppression and above all suffering from an orphan complex. Those who give themselves over to indiscriminate looting and destruction the minute the statues come down are like orphaned children robbing the corpse of a false and terrifying father.”

The regime had “decreed Albania the rose garden and solitary beacon of hope in the universe.” For this reason half a million pillboxes were built on the beaches to deter foreign invasion (these became hotspots for lovers’ trysts, winks Kapplani) and watching foreign TV was cause for internal exile. Passports were abolished.

Escapees faced a double border: first the entrance to the forbidden ‘border zone’, miles before the border itself. They could be shot at either point. It was safer to trek over the mountains, whose snow and wolves claimed many victims. Once in Greece survivors risked the routine of detention, processing, and deportation. Those who stayed had to contend with poverty, homelessness and police abuse, plus the “thousands of invisible borders” from language to loneliness. One young man’s sole entertainment is a weekly visit to a sex cinema. After the film he windowshops a brothel “with a sign outside written in Albanian: ‘Greeks only.’”

Television, which in the old country had been a secret source of dreams about the outside world, “is now the source of all your nightmares. It projects a magnified view of your dissonant, repellent, terrifying face. .. ‘I am not like that,’ you shout, but your voice does not affect the image.” This passage is so good I’m tempted to quote it entire. But I will refrain.

A tone of humane irony dominates the book. One of the migrant’s many crimes is to remind the Greek natives of their past, when they travelled to western Europe and the United States in search of work. Kapplani reminds us of ‘the Ludlow martyr’, Louis Tikas (who changed his name when he took American citizenship), assassinated for fighting for better working conditions for Greek migrant labour.

There are priceless observations on the differences between the first and second generations of migrant, and the native population’s response to the two. And here’s Kapplani on racism:

“It’s an age-old game: the rich are responsible for coming up with racist theories and it’s the job of the poor to apply them by persecuting other poor people, and thus the poor get poorer and the rich get richer.”

These aren’t mere throwaway lines. Each brilliant nugget emerges very convincingly out of a rock-solid context. You must read the book.