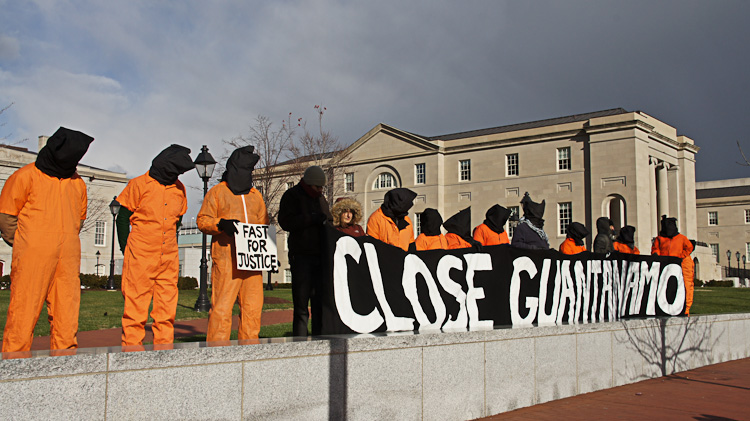 Four members of Witness Against Torture were found guilty in a jury trial at D.C. Superior Court on January 5, 2012. The jury brought back guilty verdicts in the cases of defendants Brian Hynes of the Bronx, NY, Mike Levinson of White Plains, NY, Judith Kelly of Arlington, Virginia, and Carmen Trotta of New York City, NY. Josie Setzler of Fremont, Ohio was acquitted mid-trial after the prosecution’s witnesses failed to identify her.

The demonstrators were charged with one count of disorderly and disruptive conduct on Capitol grounds. The charges stemmed from protests against a Defense Appropriations Bill—a precursor to the recently passed National Defense Authorization Act of 2012 (NDAA)—that took place in the citizen’s gallery at the House of Representatives on June 23, 2011. The protests were in response to provisions in the bill that make it essentially impossible to close the prison in Guantánamo Bay, Cuba and that legalize indefinite detention.

Prior to the start of the trial, the Prosecutor Brandon Long asked District of Columbia Superior Court Judge Gerald Fisher to disallow any statements regarding Guantánamo into the courtroom fearing that mentioning the detention center and the torture that occurred there “could possibly inflame the jury”. Judge Fisher readily agreed, saying, “Speaking about Guantánamo is inappropriate for the purposes of this trial.” Carmen Trotta responded that it was vital for him to mention Guantánamo Bay because “due process everywhere is being threatened and we have the privilege of due process here, right now.” The judge rejected Trotta’s argument, saying, he “does not want an improper politicization of the defendants’ charge.”

In addition, the judge barred any mention of indefinite detention, torture, President Obama and his policies, including the recently signed NDAA, or the former President Bush and his establishment of Guantánamo, Bagram and various CIA black sites around the world.

Defendants were also unable to appeal to international law as justification for their actions. The Nuremberg principles?  The Universal Declaration of Human Rights? These defenses are not appropriate in DC Superior Court.

The judge even disallowed a reading of the statement the defendants were attempting to deliver to Congress, saying, “The statement made from the gallery is not appropriate for the purposes of this trial.”1

As the trial progressed the prosecutor was intent on focusing on the minutia of the regulation. What is important is a regulation was broken. Decorum was lost! Voices were raised! When the prosecutors claimed that distracting Congress members “causes inefficiencies in the process” I laughed out loud.

The prosecutors relied on the tried and true “time and place” restrictions on free speech, saying the House of Representatives was neither the time nor the place to voice disapproval of Congress, even though they were in fact voting on a bill with provisions to keep Guantánamo open, the very issue the activists went to Congress to discuss.

In closing, Prosecutor Long said, “Rules are rules, the law is the law.” He asked the jury, “Why does it matter? Why should you care that the four defendants stood up and yelled in the House of Representatives?” Answering his own question he said, “It matters because it is the law, the law is important.” Apparently the complete hypocrisy of this statement eluded him. For 10 long years the very government Brandon Long represents have been breaking international and domestic law. There have been no repercussions, no accountability and the current administration continues to act with impunity. After 10 years Guantánamo remains open, 89 men cleared for release remain imprisoned there, many others are imprisoned without due process, and the recently signed National Defense Authorization Act makes their release virtually impossible. Rules are rules, laws are laws!

Bahraini national Jumah al-Dossari was taken into custody by the Pakistani army while trying to leave Afghanistan. According to the testimony he gave Amnesty International, he was imprisoned, robbed, tortured, and then sold to American soldiers searching for potential terrorists. He was detained in Guantánamo for over five years. According to the US military, he attempted suicide at least 12 times during his detention. In a letter written to his lawyer and published in the Los Angeles Times newspaper on 11 January 2007, Jumah al-Dossari wrote, “The purpose of Guantánamo is to destroy people, and I have been destroyed. I am hopeless because our voices are not heard from the depths of the detention centre.” He wrote this poem as part of a suicide note sent to his lawyer.

Take my blood.
Take my death shroud and
The remnants of my body.
Take photographs of my corpse at the grave, lonely.
Send them to the world,
To the judges and
To the people of conscience,
Send them to the principled men and the fair-minded.
And let them bear the guilty burden before the world,
Of this innocent soul.
Let them bear the burden before their children and before history,
Of this wasted, sinless soul,
Of this soul which has suffered at the hands of the “protectors of peace.”

Indeed. The point of our witness is to inflame passion in the courthouses and the streets! The time and place is here and now, always and everywhere, until Guantanamo is closed and torture is not the law of the land. Join us in our continuing fast and witness and culminating in a mass mobilization in Washington DC Jan 11, 2011. See www.witnesstorture.org for additional information and ways you can support this effort.

1 The statement barred in the House of Representatives and in court as irrelevant read as follows: “Today the House of Representative is in the process of contemplating not the passage of a bill but the commission of a crime. Provisions in the proposed Defense Appropriations Bill grant the United States powers over the lives of detained men fitting of a totalitarian state that uses the law itself as an instrument of tyranny. The law would make the prison at Guantánamo permanent by denying funds for the transfer of men to the United States, even for prosecution in civilian courts.”

— Johnny Barber has traveled to Afghanistan, Iraq, Israel, Palestine, Lebanon, Jordan and Syria & Gaza to bear witness and document the suffering of people who are affected by war. His work can be viewed here and here.