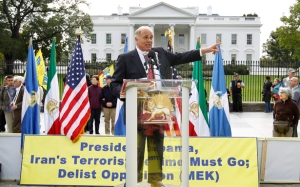 A new chapter has been added to the shale gas industry’s eco-terrorism, counterinsurgency and psychological operations saga.

In March, NBC News investigative reporter Michael Isikoff revealed that many prominent U.S. public officials are on the payroll of the People’s Mujahedin of Iran (MEK), a group labeled by the U.S. State Department as a terrorist organization. These U.S. officials are lobbying hard to remove the MEK from the list.

Under U.S. Supreme Court precedent, after the recent Holder v. Humanitarian Law Project decision — a controversial decision itself — it is a federal crime to provide “material support” for a designated terrorist organization. But legal niceties are apparently of nil concern to those on the dole of the MEK, a list that includes several big name political figures, according to a report written by former Bush Administration attorney and RAND Corporation analyst Jeremiah Goulka. A sample is below:

Many other powerful people are on the bipartisan list, as well.

Rendell — as one example — received $160,000 on his MEK-funded speaking tour. He and others are now under a legal investigation and were issued a subpoena by the U.S. Department of Treasury for taking cash from a designated terrorist group.

Rendell and Ridge: From “Militant” Labelers to Terrorist Enablers

In the fall of 2010, while Ed Rendell was Governor and Tom Ridge was Strategic Advisor of the Marcellus Shale Coalition, the media discovered that Pennsylvania’s Office of Homeland Security (DHS) was monitoring and filing intelligence reports on citizens speaking out against the then nascent shale gas industry’s presence in the Marcellus Shale basin. In one bulletin, PA Homeland Security refers to “militants” and “environmental extremists” who dare to question the fossil fuel industry’s practices.

That incident came and went, with many believing it was an isolated incident. It wasn’t. Far from it, in fact.

PSYOPs, Insurgents, and “Eco-Terrorists” in the Marcellus and Eagle Ford

The industry was again caught red-handed in the fall of 2011 when DeSmogBlog, with the help of Earthworks’ activist Sharon Wilson, uncovered a bombshell story.

The short version: at an October 2011 Houston, TX conference for shale gas industry public relations professionals, PR flacks for gas industry corporations Range Resources and Anadarko Petroleum Corporation revealed that they utilize psychological warfare tactics on concerned stakeholders in the areas in which they are fracking, and that they see themselves fighting a counterinsurgency war against these stakeholders, who in this fight are viewed as “an insurgency.”

Then in February, The Public Herald reported that, during an August 2011 team reporting trip at Tioga State Forest in Troy, PA, some of its journalists were accused by Seneca Resources truck drivers as being “trespassing eco-terrorists.” That’s ironic given that Tioga is a public park operated by PA’s Department of Conservation and Natural Resources. Seneca proceded to threaten to detain these journalists without legal authority to do so and also attempted to seize the camera of The Herald‘s reporting crew.

The Herald stated in response,

“To be labeled as, or even associated with, an ecoterrorist is no small thing…Clearly, a need for government to protect the people within the United States from real acts of aggression or violence has been usurped by private interests when journalists, or the public, can be so easily labeled as ‘ecoterrorists.'”

There’s more. On February 28, The Washington Post reported that the FBI is labeling anti-fracking activists in Texas’ Eagle Ford shale basin, in the city of Denton, TX, as “eco-terrorists.”

“Even as environmental and animal rights extremism in the United States is on the wane, officials at the federal, state and local level are continuing to target groups they have labeled a threat to national security, according to interviews with numerous activists, internal FBI documents and a survey of legislative initiatives across the country,” wrote The Post.

An insurgent, by definition in U.S. lexicon, is another name for a “terrorist.”

While citizens concerned about the impacts from fracking and reckless gas industry practices are being labeled “eco-terrorists” and “an insurgengy,” those responsible, directly or indirectly for having them labeled as such, are shilling on behalf of a State Department-designated terrorist organization.

The hypocrisy here reeks any way you slice it.

Steve Horn is a researcher and writer at DeSmogBlog, where this article first appeared. He is also a freelance investigative journalist.

One thought on “Rendell and Ridge: From “Militant” Labelers to Terrorist Enablers”