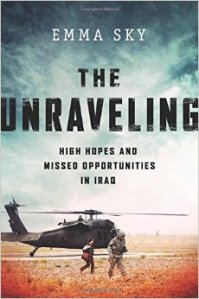 This review appeared in the Guardian.

Emma Sky’s “The Unravelling: High Hopes and Missed Opportunities in Iraq” is an very useful, eminently sensible “tale of unintended consequences, both of President Bush’s efforts to impose democracy and of President Obama’s detachment.” A critical insider’s account, it undermines the too-easy assumptions of left as well as right, realists as well as neoconservatives, exposing the achievements and (more often) stupidities of both administrations.

In 2003 Sky was a British civilian opponent of the war who nevertheless volunteered, arrived into chaos, and found herself governing the province of Kirkuk. When Saddam was a Western ally, a quarter of a million Kurds and Turkmen had been cleansed from Kirkuk and tens of thousands of (mainly Shia) Arabs moved in. Assyrian Christians and Yazidis add to the mix. Oil-rich, Kirkuk’s incorporation into Kurdistan would make that national project economically viable. “No group recognised the grievances of the others,” writes Sky, referring too to “the American tribe” who at first she railed against, “so out of place, running around in uniforms which looked like pyjamas, with their name tags on their chests.”

Sky witnessed the gallop from regime change to state collapse in the first days of occupation. The Coalition Provisional Authority and the Governing Council together institutionalised sectarianism. “The emphasis had been on identifying communal representatives rather than bridging communal divides.” Unelected Iraqi elites set about seizing the spoils, excluding Sunnis and the Shia working-class Sadrist movement.

The sweeping de-Baathification programme led by Ahmad Chalabi – a darling of the neocons later discovered to be spying for the Iranians – exempted Shia but not Sunni Baathists. Most had joined the Baath not out of ideology but for career promotion, and the programme emptied schools of teachers and hospitals of doctors, impoverishing Sunni families. The closure of state-run enterprises and the dissolution of the military exacerbated the situation. The new Iraqi army, born into the task of fighting Iraqis, would never become a national institution.

Sky was called back as political advisor to US General Odierno in 2007. The diminutive and bookish ‘internationalist’ became an unlikely but firm friend to the oversized sports and beer-loving soldier during the dual ‘surge’ – of American troops and of concrete for blast walls. This section is urgently compelling, and the only one in which the occupation finds some redemption. Sky arrived in Baghdad during the worst of the civil war, with bombs exploding and corpses littering unlit streets. “If the head was cut off, it was Shia; if the head was drilled through, it was Sunni.”

Reversing the Rumsfeld doctrine, reinforced American troops moved off base and into Iraqi communities, constructing barriers and gathering intelligence to improve security and trust. Sunnis formed Sahwa militias to drive al-Qaida from their towns while seeking American protection from the new Iranian-backed government. At the same time the Shia leader Muqtada Sadr froze the activities of his Jaysh al-Mahdi, which had lost popular support as it degenerated into ethnic-cleansing and crime. In the breathing space, economic life returned and community reconciliation was advanced.

Through this comparatively successful period Sky lived at Camp Victory, choking on a “parochial and paranoid” military world view, ears filled with the inane propaganda of the American Forces Network, and negotiating an absurd realm of acronyms. Freedom fries are available at the DFAC (Dining Facility). “CHOPS, give me POO” is a genuinely contextualised sentence. Sometimes the acronyms serve as a reality-reducing mechanism – the carnage caused by car bombs in a marketplace becomes ‘88LNKIA’ (Local Nationals Killed in Action).

As a detailed and darkly humourous account of an experience, and in its desire to understand everyone involved, Iraqis and Americans, on their own terms, “The Unravelling” is an almost novelistic book. The character sketches are as tolerant as they are critical, and Sky’s argumentative, chirpy and fiercely intelligent personality is thoroughly engaging.

Accused (by Kurdish chief Barazani) of being a latter-day Gertrude Bell, in Kirkuk she reads the reminiscenses of a 1925 British political officer, her sort-of predecessor. Feeding in Iraqi twists and tragedies since the collapse of the Ottomans, the book has a great sense of historical context. And Sky shows a genuine, unromantic affection for Iraqis, often escaping the security cordon to enjoy hospitality in the Sunni triangle or visit Shia and Yazidi shrines.

She was present again for the drawdown of forces after 2008, a hopeful period when it seemed a more cohesive Iraq was preparing for a brighter future, and that the “former exiles, Islamists and Iranian proxies” who first inherited might finally slip from power.

In the March 2010 elections, with both Sunni and Shia support, the non-sectarian, nationalist Iraqiya bloc won two seats more than Nuri Maliki’s State of Law coalition. But many MPs were disqualified by the de-Baathification committees, Maliki demanded a recount, and then manoeuvred to stay on as prime minister. To his military’s disgust, Obama ignored the deadlock for two months. The new US ambassador Chris Hill, who disliked Iraqis, told Odierno that Iraq wasn’t ready for democracy and needed a Shia strong man. An opinion poll disagreed – only 14% of Iraqis thought Maliki should stay in power. But the Iranians lobbied hard to preserve Maliki and thus to alienate Iraq from the rest of the Arab world. Obama’s acquiescence led one of Sky’s Iraqi informants to complain “Either the Americans are stupid or there is a secret deal with Iran” – an analysis which is still more widespread today. Where Bush made democracy a totem, and thought it could be delivered via occupation, Obama gave up on it entirely. The results of this equally misguided (and orientalist) approach are painfully evident today.

Sky saw the start of Maliki’s slide to paranoid authoritarianism. He continued by abandoning (or arresting) the Sahwa militias which had fought al-Qaida, detaining thousands of Sunnis without trial, killing dozens of peaceful protestors, and appointing loyalists rather than competent officers to the army.

In November 2013 Obama praised “a strong, prosperous, inclusive and democratic Iraq.” By July 2014 the Islamic State had driven the Iraqi army out of Mosul and set about cleansing religious minorities from the north. The confused response has so far been led by Iranian-backed Shia militias. And the American airforce is back in theatre – and until now failing miserably. “The Unravelling” is an indispensable tool for understanding the background to this failure.