The move reflects both the social conservatism of the Nicaraguan government and its desire for relief from U.S. sanctions. 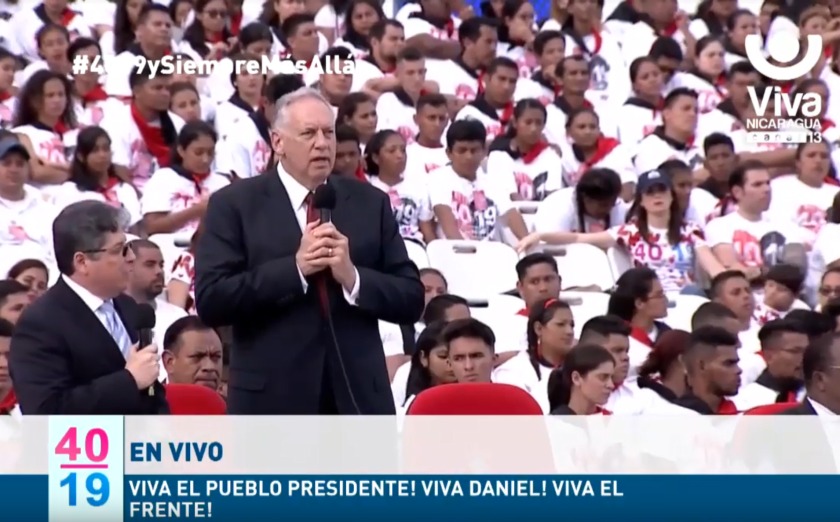 Amid thousands decked out in the red-and-black bandanas of a ruling party that once espoused the virtues of Marx and Lenin, a towering, evangelical gringo — the head of a weekly bible study at Donald Trump’s White House — took centerstage. Ralph Drollinger, a professional basketball player turned pastor, donning a suit in the muggy capital of Nicaragua, then sermonized on what it means to be “a Christian nation.”

The target of this July 19 mission trip was not the poor in this country of some 6 million, but the country’s ruling class: a U.S.-sanctioned government that invited him down to celebrate 40 years since the overthrow of a U.S.-backed dictator, following a popular uprising last year that nearly toppled it too.

“In the United States of America, we have found amongst our political leaders that it is essential they have a Bible teacher in their midst,” Drollinger said, his remarks airing on state-controlled TV. “And we are so blessed, Mr. President and Mrs. Vice President, about the opportunity that you see to do the same here in Managua.”

His is a more familiar face in Washington than Managua, which actually helps explain his presence in Central America. U.S. Vice President Mike Pence takes part in his weekly lessons on Christianity and governance, as does U.S. Secretary of State Mike Pompeo; Trump, reportedly, reads the notes. He “writes me back notes on my bible studies,” Drollinger told the BBC. “‘Way to go Ralph, really like this study, keep it up.’ Stuff like that.”

Few would confuse the stuff Ralph teaches with liberation theology. According to the pastor — a self-described conservative Republican, and an anti-gay ““extremist,” per the Human Rights Campaign — homosexuality is “illegitimate in God’s eyes”; “contentious women” violate God’s teachings by being “unrelenting in irritation”; and “the primary purpose of the state is to punish evil,” with capital punishment suggested as justice for those who violate “the sanctity of human life, which begins at conception.”

The pastor’s lessons stress the ostensibly biblical nature of private property and capitalism — blasphemous to the Sandinistas of the 1980s, perhaps, but not at odds with the 21st century Ortega, who reinvented himself as a reliable guardian of the private sector, winning praise from the International Monetary Fund.

All that makes Drollinger and his group, Capitol Ministries, attractive guests for a socially conservative regime labeled part of a “troika of tyranny” by Trump’s national security advisor, John Bolton. “On policy,” Drollinger has claimed, “Trump’s enacting everything I’ve written.” At the July rally in Managua, another man of god, Father Antonio Castro, asked Drollinger to intercede for sanctions relief when back in D.C.

In a letter to Drollinger, Ortega requested that the pastor “establish Capitol Ministries in our government,” explaining: “We know if the people that God has trusted with the destiny of a nation are born again, our legislators will legislate according to the Bible.” A local evangelical minister, Arsenio Herrera, will lead that Bible study.

In 2018, Ortega and Murillo attended a funeral service for Herrera’s mentor, U.S. evangelical pastor David Spencer, who was posthumously awarded Nicaraguan citizenship. Herrera’s oratory, delivered at his Hosanna church in Managua, was circulated by state-controlled media.

Drollinger and his staff spent a total of four days in the Central American state, which last year saw a popular uprising against austerity met with police brutality. “Systemic repression and persecution,” is how the United Nations described the crackdown, which included a 15-hour siege on a church in Managua that saw two student protesters killed. More than 300 people died in the summer of 2018, the vast majority protesters or perceived sympathizers. More than 60,000 people have since fled the country, or about 1 percent of the population.

Capitol Ministries, the group Drollinger started in 1996 to deliver his conservative interpretation of the Bible to politicians, is unperturbed by state repression,

“That is what Capitol Ministries does,” spokesperson Deborah Mendenhall explained in a July 25 email. It “teaches historical, traditional evangelical theology to government leaders,” and is prepared “to make disciples of Jesus Christ in the political arena throughout the world.” Indeed, it previously set up shop in dictatorial Belarus, and its trip to Nicaragua included meetings with the officials who led last year’s crackdown, including Ortega, his wife and U.S.-sanctioned Vice President Rosario Murillo, and Police Inspector General Jaime Vanegas, whom Human Rights Watch has declared responsible for “gross human rights violations.” A member of the group also addressed several hundred police officers, at Vanegas’ request.

“After meetings were held, President Ortega invited Capitol Ministries to establish a Bible study to his cabinet and to the congress,” Mendenhall said. In addition to “weekly, in-depth expository Bible studies,” she said, the group issues written supplements “that examine today’s issues through a biblical lens, such as ‘Solomon’s advice on How to Eliminate a $20.5 Trillion Debt,’ and ‘The Remedy to Racism.’ These studies investigate what Scripture has to say about these issues to inform government leaders of the biblical positions.”

It may seem an odd coupling. In the 1980s, when Ortega led a Sandinista cabal following the popular revolution that toppled dictator Anastasio Somoza, he and Murillo were known as atheists. But a decade and a half out of power changed that, with Ortega emerging as a changed man ahead of the 2006 election, publicly reconciling with the Catholic Church and campaigning as a Christian, his running mate a former Contra. Back in office, he signed a comprehensive ban on abortion, and today his party refers to opposition protesters as “abortionists, delinquents and atheists.”

Rudy Antonio Palacios Vargas, an evangelical minister and a former member of the Sandinista Youth, told me he thinks his coreligionists are over-earnest victims of geopolitical chess.

“Daniel and Rosario speak of a country that is Christian, socialist and caring,” he said. “But that was just the hook they used to get Drollinger to come to Managua. What they really want is to use him to intercede with Trump so that he doesn’t impose more sanctions.”

But if sanctions relief is the goal, it will be an awful hard sell. Less than 24 hours before Drollinger’s address in Managua, one of Capitol Ministries’ pupils, Vice President Pence, delivered a speech in Washington assailing Ortega and his vice president for “their assault on faith and human rights.”

Vargas, now in Guatemala after his life was threatened for supporting protests deemed “terrorism” by the state, doubts that another preacher can alter the Nicaraguan government’s behavior, either. “They keep killing, they keep kidnapping, they keep torturing, they keep violating the freedom of the press,” he said, likening it to the Somoza dictatorship that fell in 1979. “Hundreds of pastors have come to Nicaragua to speak the word of God,” he said, “and there has never been real change.”

Charles Davis is a writer in Los Angeles. His work has aired on public radio and been published by outlets such as The Guardian, The Daily Beast and Columbia Journalism Review.

A writer and producer with whose work has aired on television and radio and been published by outlets such as Al Jazeera, The Intercept, The Nation and The New Republic. View all posts by Charles Davis