It’s no news by now that Israel is constructing a culture center in the illegal Ariel settlement. It’s not surprising that Habima, Israel’s national theater company, was scheduled to preform there. It is, however, refreshing that actresses and actors from Habima and other leading theater companies, the likes of the Cameri, signed a letter to Culture Minister, Limor Livnat, refusing to preform in the Occupied Territories.

Of Boycotts and Green Bans

Sixty/Thirty-six is a big number for any one sector in Israel, not to mention for any dissent in Israel, at all. I can’t say the actor’s letter doesn’t spark hope in me as to a growth in dissent in Israel (they’ve been joined by non-theatre people of the arts), but one mustn’t get carried away. The Guardian reported:

“Dozens of Israeli actors, playwrights and directors have signed a letter refusing to take part in productions by leading theater companies at a new cultural center in a West Bank settlement, prompting renewed debate over the legitimacy of artistic boycott.”

END_OF_DOCUMENT_TOKEN_TO_BE_REPLACED 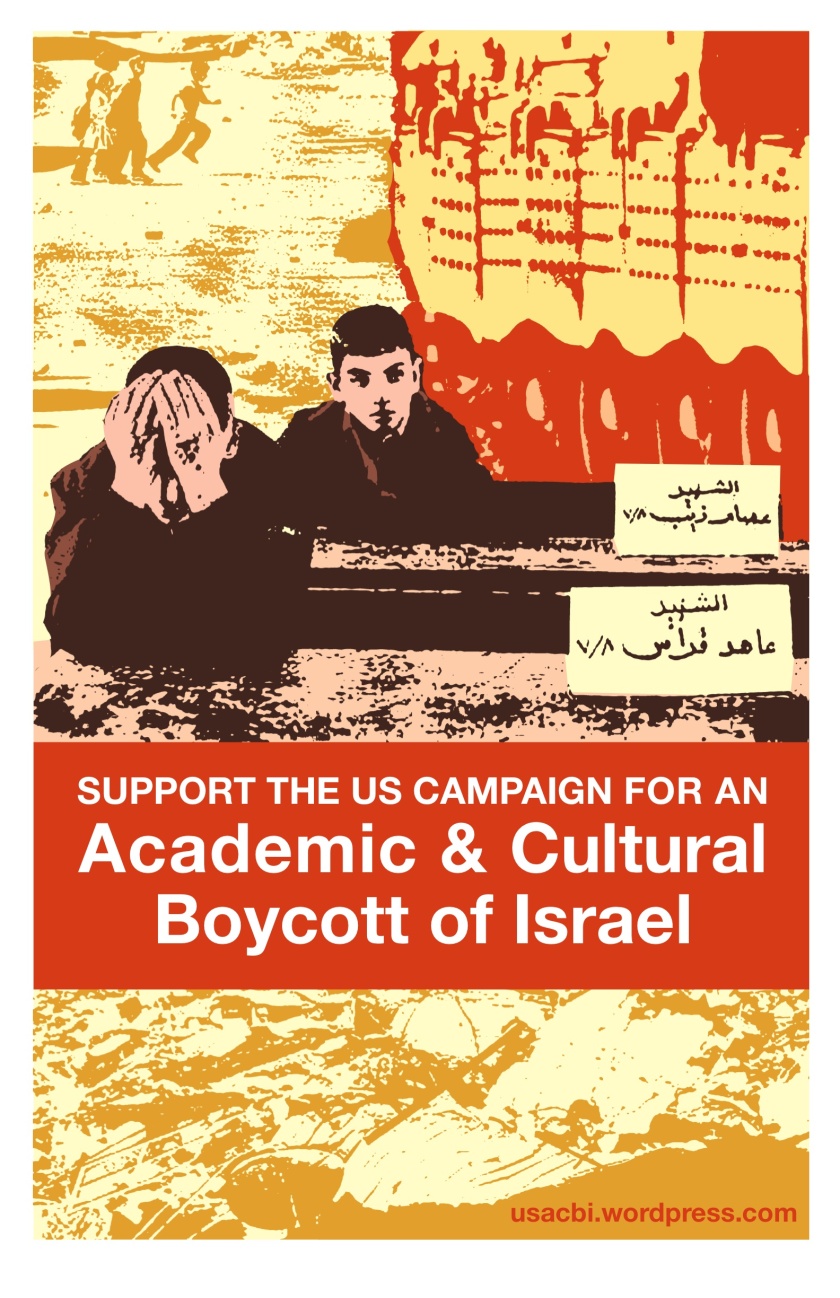 December 27, 2009 marks the one-year anniversary of the beginning of ‘Operation Cast Lead,’ Israel’s 22-day assault on the captive population of Gaza, which killed 1400 people, one third of them children, and injured more than 5300.  During this war on an impoverished, mostly refugee population, Israel targeted civilians, using internationally proscribed white phosphorous bombs, deprived them of power, water and other essentials, and sought to destroy the infrastructure of Palestinian civil society, including hospitals, administrative buildings and UN facilities.  It targeted with peculiar consistency educational institutions of all kinds: the Islamic University of Gaza, the Ministry of Education, the American International School, at least ten UNRWA schools, one of which was sheltering internally displaced Palestinian civilians with nowhere to flee, and tens of other schools and educational facilities.

While world leaders have tragically failed to come to Gaza’s help, civilians everywhere are rallying to show their solidarity with the Palestinian people, with anniversary vigils taking place this week in New York, Washington DC, Seattle, Portland, San Francisco, Boston, Los Angeles, and many more cities and towns in the US and world-wide.

END_OF_DOCUMENT_TOKEN_TO_BE_REPLACED

The israeli group, BOYCOTT! Supporting the Palestinian BDS call from within, have circulated a call to action, asking Israeli citizens to contact officials at the University of Trondheim, and express their support for a decision in favor of an institutional boycott against Israeli

universities. The letter sent by the group itself follows.

Boycott the Israeli Academy Now! – Open Letter from Israeli Citizens to the Board of Governors of Trondheim University

We, Israeli citizens, activists and supporters of BOYCOTT! Supporting the Palestinian BDS call from within, an Israeli group in support of boycott, divestment and sanctions against Israel, applaud faculty members at the University of Trondheim and University College of Sør-Trøndelag in Norway for their principled support for the cause of justice in Palestine by proposing a motion to boycott Israeli universities. We support this historic step in the direction of applying effective pressure on Israel and holding it accountable for its occupation and apartheid policies, which violate international law and fundamental human rights.