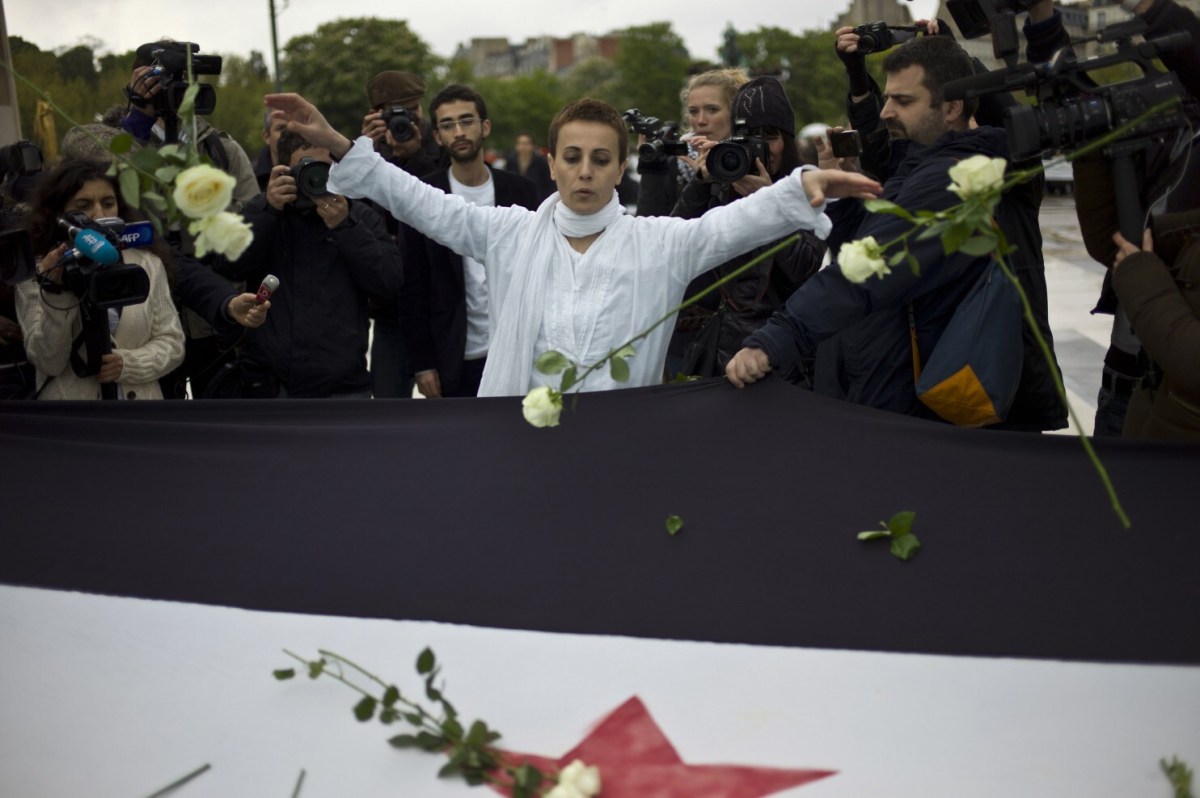 (Photo: Fadwa Suleiman at a protest in 2012 photographed b Thibault Camus for AP)

It was as if I were stepping onto the page and walking into Satis House¹.  A decrepit old house perched upon a ridge in Al Kiwan, overlooking the Ottoman Railway that snaked down towards the Barada.  A house that echoed former glory and youth that was now a mausoleum to my two great aunts and their stale virginity.  Siba and Amina were as dilapidated as their abode.  Two spinsters forgotten by time, mixed in with their trinkets and clutter, dressed impeccably to mirror each other.  Pressed pleated skirts, bespoke handmade shoes from the Armenian cobbler, silk scarves perched upon their heads.  I sat there in awe of them as they followed my aunt to the kitchen making sure she didn’t whisper any evil omens into the coffee pot.  The threadbare nets billowing like Miss Havisham’s² decaying wedding dress in the heat of the Damascus breeze. The walls hunched over struggling to carry their weight, as if waiting for Siba and Amina to leave.  ‘This is what awaits young girls that are too highly strung!’ my aunt Rabia whispered in my ear.  Siba placed two gold bangles on my eight-year-old wrist, her sinewy witch-like fingers travelling up to my face as she examined me intently.  ‘She is dark like her Moroccan mother, but tolerably pretty.’  It was common enough for remarks to be made about my appearance as if I were not present, and with time it became apparent what was expected of me.

Patriarchy was a bitter poison that I couldn’t swallow.  Born and raised in England, I arrived in Damascus at the age of sixteen.  Everything was a shock to my system, and nothing more than having to run the gauntlet of the restrictions of my sex. It was summer and my aunty Zahra was ecstatic at the prospect of having a new charge to marry off.  I remember the heavy oak lounge door sliding open – my cue to totter in in a pair of hideous heels hastily bought the day before, trying to balance the mandatory tray of tar-like coffee as the potential groom and his mother stared at me intrusively.  He was a pompous doctor of 32.  ‘What are your ambitions in life?’ he asked. My face burned with humiliation as I felt him lay judgement.  What I should have said is, ‘It’s my ambition to one day write an article so I can highlight what an imbecile you are!’