That is according to Afghan child witnesses interviewed by Yalda Hakim for Australia’s SBS Dateline. (h/t Shaheen)

Hakim, who was born in Afghanistan and immigrated to Australia as a child, is the first international journalist to interview the surviving witnesses. She said American investigators tried to prevent her from interviewing the children, saying her questions could traumatize them. She said she appealed to village leaders, who arranged for her to interview the witnesses.

END_OF_DOCUMENT_TOKEN_TO_BE_REPLACED 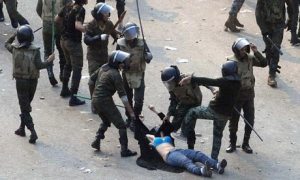 Money doesn’t solve, salve, cure, stabilize, forge peace, make or keep promises. And aid packages, no matter how much they’re needed or with how much philanthropic goodwill they’re sent, will not help anyone by themselves. It matters as much in whose hands the money falls as fast as it flows. The United States State Department should have considered this when deciding to continue to fund and arm the Egyptian military regime.

As pivotal as Egypt has been as an historical ally and an advocate for various degrees of peace in the region, and as necessary as the country may be as a counterweight to the militant authoritarianism of Iran, the United States cannot afford to fund another oppressive regime. Or, rather, it can afford it, but it shouldn’t. And funding is what the Obama administration and Hilary Clinton are doing: sending 1.3 billion dollars of military assistance to the military regime despite clear evidence of human rights abuses.

Since 1979 annual U.S. military aid to Egypt has grown, according to the State Department’s own statistics, to over $1.3 billion dollars a year. A few months ago, because of increasing concern of human rights violations, when we allocated this year’s $1.3 billion package we did so contingently, based on the implementation of “policies to protect freedom of expression, association, and religion, and due process of law.” And yet, as detailed in a letter from Amnesty International urging Clinton not to send more money and arms to Egypt, “Egyptian security forces have killed numerous civilians, and the Egyptian government has demonstrated a systematic failure to rein in security forces and stop the attacks on Egyptian and foreign non-governmental organizations (NGOs) working in Egypt.”

END_OF_DOCUMENT_TOKEN_TO_BE_REPLACED

The great Max Blumenthal, Puffin Foundation Writing Fellow for the Nation Institute, is interviewed on RT about the killings of Trayvon Martin and Shaima Alawadi, racial profiling and the normalization of Islamophobia in the U.S.:

A year ago, Syrians took to the streets in peaceful protest demanding democratic change but the regime ruthlessly crushed the uprising. Empire discusses if the world powers can do anything to stop the escalation of force.

We encourage readers to tune in to this excellent program produced by the Tax Justice Network. Hosted  by Naomi Fowler, each 15 minute podcast follows the latest news relating to tax evasion, tax avoidance and the shadow banking system. The show will feature discussions with experts in the field to help analyse the top stories each month.

In 1876, at the so-called Battle of the Little Bighorn when U.S. Cavalry regiments attacked an Indian village along the Little Bighorn River in Wyoming, the first casualty was a ten-year old Lakota Sioux boy named Deeds. Unaware that U.S. troops were nearby planning an attack, he and his father were combing a hillside looking for a lost pony when U.S. troops encountered and killed him. The next casualties were six Lakota women and four children, who were murdered while in a field gathering wild radish bulbs, one of the many indigenous plants that Native people depended on for their livelihood, and hardly a threatening activity.

I think of these events today because of the recent killings of Afghan civilians, not only the 17 women and children killed in villages outside Kandahar, but also two recent and less publicized atrocities resulting from NATO airstrikes that killed civilians in Kapisa Province, including eight Afghan boys who were tending their sheep. Sheepherding, of course, is an activity as integral to their livelihood as gathering indigenous plants was to Lakota people.

END_OF_DOCUMENT_TOKEN_TO_BE_REPLACED

Yesterday, Al Jazeera premiered the first part of a two-part documentary I’ve been working on, focusing on the Occupy movement. The film was made for Fault Lines, the award-winning public affairs documentary program.

Watch part one of the film here, and find more information below the fold:

END_OF_DOCUMENT_TOKEN_TO_BE_REPLACED

This is typically excellent and courageous. The journalist is supposed to be anonymous but they haven’t disguised his voice very well.

An Al Jazeera journalist who was forced to remain anonymous for security reasons offers an unusual but compelling first-person account of a country in turmoil and a revolution in progress in this intriguing episode of People and Power.