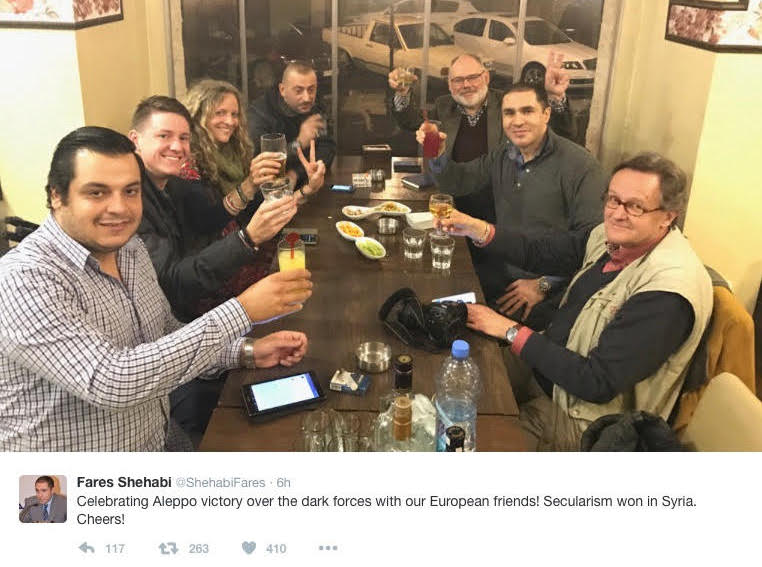 The notorious Assad regime propagandist Vanessa Beeley has been recently on a speaking tour of the UK. She has been showing up at small venues  in Bristol, Birmingham, and London to give a presentation entitled “Aleppo: Fall or Liberation”. These talks have been hosted by the Communist Party of Great Britain Marxist-Leninist (CPGB-ML), which openly supports and glorifies Josef Stalin. In Bristol, her talk was held at the Palestine Museum and attended by about 70 people.

The general gist of Beeley’s talk is similar to her published work on websites such as 21st Century Wire and Mint Press News. The rebels are non-Syrian terrorists from Al-Qaeda who commit atrocities against the population in the areas they hold; what is happening in Syria is part of a regime change conspiracy that has been in place since the 1980s involving the media, human rights organizations, and Western governments; Bashar Al-Assad’s army is the main humanitarian agent, providing Syrians in East Aleppo and other rebel-held areas it captured with relief and medical care.

Members of Syria Solidarity UK who attended Beeley’s presentation (two and a half hours ong) have provided a more detailed account of the meeting here. This article will only look at a few minutes of her talk, which encapsulate the maliciousness of her propaganda and how it is designed to make the targeting and murder of Syrian civilians acceptable to people who consider themselves “progressive” and “anti-imperialist”.

END_OF_DOCUMENT_TOKEN_TO_BE_REPLACED

The recent death of the Bulgarian-French cultural theorist and historian of ideas Tzvetan Todorov at the age of 77 flew largely under the radar of the digital commons. Precious few obituaries have appeared in English. The New York Times ran a good one. The literary scholar Françoise Meltzer of the University of Chicago wrote a nice tribute for the blog of the journal Critical Inquiry. That’s about it as far as I can tell, at least as of yet. This is surprising, given Todorov’s enormous influence and voluminous output across a wide swath of fields and themes.

I had the pleasure of interviewing Todorov a decade ago for Critical Inquiry. I had wanted to interview him for some time. I pitched the idea to the journal’s editor, W. J. T. Mitchell, over dinner at the Ethiopian Diamond in Chicago’s Edgewater neighborhood after an event for his book What Do Pictures Want? Mitchell (who would later have his own exchange with Todorov) immediately gave me the green light, for which I remain deeply grateful. Todorov and I covered a range of questions, beginning with his intellectual biography and style, onto a series of political issues — ones that remain strikingly relevant today.

The full text of our interview can be found here.