Last night I was at London’s Purcell Room, honoured to be in the presence of novelist and screenwriter Nihad Sirees and poet Golan Hajji. The event was chaired by the BBC’s Lyse Doucet. We were talking about writing in the context of the Syrian revolution. Then I participated in the morning edition of the BBC World Service’s World Have Your Say, discussing Syria, and I joined the WHYS in the evening too, discussing Syria and Mali (on which I’m no expert) at greater length.

Here is the morning edition.

And here is the longer evening programme.

On Fault Lines, Josh Rushing embeds with US troops on the front lines of Obama’s war and asks: What is the US trying to achieve in Afghanistan, and will it really make the US safer?

A significant ruling against Dell in Spain, India shelves rules that would have tackled corporate tax abuse until 2016, the EU threatens to blacklist Switzerland and we take a look at ‘Google Capitalism.’

The Tax Justice Network‘s latest TaxCast is out. Hosted  by Naomi Fowler, each 15 minute podcast follows the latest news relating to tax evasion, tax avoidance and the shadow banking system. The show features discussions with experts in the field to help analyse the top stories each month.

“We are outraged and shocked at these offensive comments (made by MP David Ward last week) about Jewish victims of the Holocaust and the suggestion that Jews should have learned a lesson from the experience” — Jon Benjamin, chief executive of the Board of Deputies of British Jews, 1/25/2013.

I must apologize for not responding to the lashing given to Lib Dem MP David Ward a week ago as my wife’s Mother, 88 years of age, was moved into Hospice care readying her for leaving this vale of tears. Her life, as is true of my own, suffered the horrors of WWII and the Nazi devastation of prisoners including, from 1933, Communists, Socialists, Social Democrats, Roma (Gypsies), Jehovah Witnesses, homosexuals, (and) persons accused of “asocial” or socially deviant behavior, and Jews, between 1938 and 1945 (Holocaust Encyclopedia). Our lives are bookended between depressions and wars. So what have we learned, as David Ward so tellingly asks to the chagrin of many including Mr. Benjamin quoted above. Curiously I found Mr. Ward’s  comment incomplete. This is what he said: END_OF_DOCUMENT_TOKEN_TO_BE_REPLACED

Reporter Janine di Giovanni has been to the worst places on Earth to bring back stories from Bosnia, Sierra Leone and most recently Syria. She tells stories of human moments within large conflicts — and explores that shocking transition when a familiar city street becomes a bombed-out battleground. 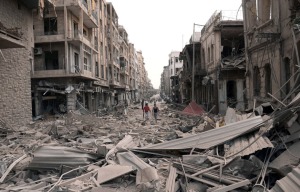 This piece, a rebuttal to Marc Lynch, was published at Foreign Policy under the title Fund Syria’s Moderates.

In response to non-violent protests calling for reform, the Baathist regime in Damascus has brought Syria bloodshed, chaos, and created the conditions in which jihadism thrives. The now partially armed revolution is doing its best to roll back the bloodshed and to eliminate the regime that perpetrates it.

Yet Foreign Policy’s Marc Lynch, one of the more perceptive analysts of the Middle East, argues that after more than 60,000 lives have been lost, “the last year should be a lesson to those who called for arming the rebels.” In a previous article, Lynch noted, “Syrian armed groups are now awash with weapons.”

Anyone laboring under the delusion that pro-revolution foreign powers have flooded Syria with hi-tech weaponry should scroll through the blog of New York Times correspondent C.J. Chivers or peruse the web pages displaying improvised catapult bombs and PlayStation-controlled armored cars. These are hardly the tools of a fighting force that has been armed to the teeth.

While it’s true that some armed groups — particularly the al Qaeda-linked Jabhat al-Nusra — have sometimes found themselves in possession of plenty of weaponry, the resistance remains overwhelmingly dependent on the weapons it can buy, steal, or seize from captured checkpoints and bases.

END_OF_DOCUMENT_TOKEN_TO_BE_REPLACED

As a candidate for president, Barack Obama promised a new direction. Just days after taking office, the new US president issued a series of executive orders banning all acts of torture, discontinuing the use of CIA black sites, and calling for the US detention centre at Guantanamo Bay to be closed.