We look at the internal divisions inside the Syrian National Coalition as they wrestle for legitimacy. To understand the reasons behind internal divisions inside the Syrian opposition, Inside Syria with presenter Hazem Sika discusses with guests: Najib Ghadbian; a representative of the National Coalition of Revolution and Opposition Forces in the UN; Robin Yassin-Kassab, a novelist and commentator; and in Athens-Ohio, Amr al-Azm, a professor of Middle East history and anthropology at Shawnee State University.

“Put yourself in their shoes. Look at the world through their eyes. It is not fair that a Palestinian child cannot grow up in a state of their own. Living their entire lives with the presence of a foreign army that controls the movements not just of those young people but their parents, their grandparents, every single day. It’s not just when settler violence against Palestinians goes unpunished. It’s not right to prevent Palestinians from farming their lands; or restricting a student’s ability to move around the West Bank; or displace Palestinian families from their homes Neither occupation nor expulsion is the answer. Just as Israelis built a state in their homeland, Palestinians have a right to be a free people in their own land” (President Barak Obama in Israel 2013).

Would that the President might take his own advice—“Put yourself in their shoes. Look at the world through their eyes”—he need only open his eyes beyond the wall that imprisons the Palestinians he speaks about: see how the wall blinds the Jews to the plight of the people they drove from their land, see the barren landscape on the other side rubble strewn, savaged by bulldozers and missiles, see the people caught in a maelstrom of poverty and deprivation, listen to the mothers and wives weep for their husbands and sons jailed without charge in Israel’s Gulag where escape comes by self-starvation as the only defense against indefinite torture and lives lost to family and friends, listen to the cries of the people of the world who have condemned this barbaric behavior only to run into the President’s own wall–the veto in the UN Security Council that effectively denies the justice he so righteously exalts, “Peace is also just.” How true and how easily it could be made a reality if he were to simply abstain during the vote that sought to bring this defiant state before the International Court of Justice finally after 64 years of impunity to the very justice this President mouths, as though saying it levitates him beyond criticism.

END_OF_DOCUMENT_TOKEN_TO_BE_REPLACED

This was published in the National.

From the very start, some commentators convinced themselves that the Syrian popular revolution was plotted, funded and armed by the West. From Seamus Milne to John Pilger, from Glenn Greenwald to George Galloway, they described the West supplying oppositionist ‘jihadist elements.’ Former leftist icon Tariq Ali spoke on Russia Today of “Russia and China resisting attempts by the West to take Syria over.” Russia is resupplying the Assad regime with the materiel with which to slaughter the Syrian people, making Ali’s performance on Russia’s satellite as unedifying, and as distant from reality, as that of a commentator telling Fox News that Palestinian resistance is simply an Iranian attempt to take over Israel.

These journalists have staked their positions against the evidence. They have done so by forcing Syrian realities, breaking the edges of these jigsaw pieces, to fit their prior geopolitical concerns (their opposition to concurrent Israeli-American and Saudi enmities towards Iran) or ideological stances (that, following Iraqi and Palestinian models, the West must always be the troublemaker in the Arab world).

But Syria is neither Palestine nor Iraq; Syrian events are moved primarily by internal dynamics – namely the violence of the regime and the agency of the rising Syrian people. The conspiratorial leftist perspective misses this, first by vastly overestimating Western influence on current events (a failure to accurately diagnose the historical moment) and, secondly, by misunderstanding how unenthusiastic the West is for any rapid democratic or revolutionary change in Syria.

END_OF_DOCUMENT_TOKEN_TO_BE_REPLACED

Paulo Freire’s last public interview, given to Literacy.org in 1996. Freire is most famous for his work The Pedagogy of the Oppressed.

From Channel 4: In the first of a Channel 4 News series charting Syria’s descent in the face of civil war, German filmmaker Marcel Mettelsiefen’s spends several weeks in Aleppo witnessing a civilian population isolated and under siege. (Caution: contains highly distressing scenes of war including images of children who have been wounded and killed)

A very fine speech at the Arab League summit by Syrian opposition leader Moaz al Khatib, which ends with a call to all the gathered Arabs to release their detainees and end oppression and injustice. (English subtitles included)

In the Name of God the Most Merciful…

God’s peace and blessings be upon you all. This blessing comes from a people one quarter of whose population are now homeless, one hundred thousand are imprisoned. They have paid a heavy price for the freedom they seek, with over 100,000 martyrs and a destroyed infrastructure, at the hands of a savage oppressor.Peace and blessings upon you, from a people who are being slaughtered under the watchful eye of the world for two years, and have been bombarded with a variety of heavy weapons and ballistic missiles, while many governments continue to shake their heads and wonder what they should do.

Peace and blessings upon you, from the only people in the world where warplanes bomb bakeries, and the dough is blended with the blood of children and women.

Peace and blessings upon you, from the widows and orphans, the tortured, the wounded and the disabled, the prisoners and the detainees, the refugees and displaced, the rebels and the fighters, and the martyrs that flutter around this wretched world.

Peace and blessings upon you, from a people who will follow the path to freedom, and who posses a will that can destabilize the greatest idol, and a love that fills the world with tranquility, warmth and compassion.

END_OF_DOCUMENT_TOKEN_TO_BE_REPLACED

Christopher Lydon is the worthiest personality to have graced American radio. His skills as a host are admired by every listener to Radio Open Source. But you’ll have to hear the following conversation to appreciate how even as a guest he has few equals. Our friendship was formed over our shared devotion for ideas of the late Tony Judt. But I’m happy to discover that we also have in common a deep love for Hemingway’s prose. Here is Chris discussing Hemingway and Tennessee Williams on Boston Public Radio with Jim Braude and Margery Egan. Don’t miss it because radio does not get any better than this

The Tax Justice Network‘s latest TaxCast is out. In this month’s show: the crisis in Cyprus and the risk tax havens pose to the global economy, a surprise earthquake for UK-affiliated tax havens and a frustrated corporate tax inspector speaks out on the corrupting of the tax system.

A version of this review was published at the Independent.

“The Silence and the Roar” by Syrian novelist and screenwriter Nihad Sirees was written in 2004, long before the roar of revolutionary crowds, and the countervailing roar of gunfire and warplanes, filled Syrian skies.

Counterposed to the roar there are two forms of silence: of imprisonment and of the grave. The first holds an ironic allure, for “the most beautiful thing in the entire universe is the silence that allows us to hear soft and distant sounds.”

The narrator is Fathi Sheen, a writer fallen out of favour with the regime, silenced only to the extent that he doesn’t write any more. He’s very pleasant company, amusing and straightforward, his digressions into Aristotle and Hannah Arendt notwithstanding. Over the course of a day Fathi struggles against the flow of celebrant crowds and regime thugs to visit first his mother and then his lover. He’s been content thus far to continue not to write in return for being left alone, but it becomes clear as the hours pass that the Leader’s friends plan to drive a different sort of bargain. The novella is in part a parable of the artist surviving under dictatorship. How does he make space for creation between silent and roaring states of mind? How does he avoid the regime’s Faustian temptations? More generally, how should one resist?

One answer for Fathi and his lover Lama, as for Winston Smith and his Julia, is through sex, which they find to be “a form of speech, indeed, a form of shouting in the face of the silence.”

END_OF_DOCUMENT_TOKEN_TO_BE_REPLACED

An edited version of following article about the causes of the Iraq war appears in The National as “A parade of characters and causes led the US to war in Iraq“. 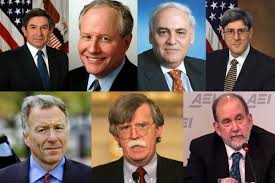 Ten years since ‘shock and awe’, the reasons behind the invasion of Iraq have yet to be satisfactorily explained. Journalists, scholars, statesmen, soldiers, spies, and ideologues have all toiled for answers. Oil, imperialism, militarism, democracy, Israel and free markets have each been offered as explanations. Mono-causal and mutually exclusive: they seem to enlighten less than they satisfy the innate human need for simplification. In the hands of academics, on the other hand, explanations inevitably turn ‘complex’ – a ubiquitous marker that separates man from mandarin.

To say that the causes of the Iraq war are easy to explain is not to say that they are simple. But the lack of simplicity also does not imply indeterminacy. The reality may be complex but is decidedly explicable.