“We were told as diplomats, ‘Don’t ever put anything in a cable you wouldn’t want on the front page of a newspaper.’ It shows that they’re a lot of arrogant people, that the system itself wasn’t checking itself,” says Ann Wright, Retired United States Army Colonel and former State Department official, of the latest documents released from WikiLeaks. Meanwhile, several of the diplomatic cables released depict possibly illegal actions by the U.S. government, and Wright notes that the chances of anyone being held accountable are slim.

Ann Wright joins Laura in studio to discuss the latest releases from WikiLeaks, what they tell us about the Defense and State departments, and what should happen–but probably won’t–to the people implicated therein.

Wilkerson on the significance of Wikileaks and …, posted with vodpod

John Nichols joins Bob McChesney on this week’s Media Matters to discuss their recent article published in The Nation magazine, November 29th, 2010 edition. Call and comment or ask a question this Sunday, November 28th on WILL AM580.

Nichols are McChesney are authors of The Death and Life of American Journalism: The Media Revolution That Will Begin the World Again.

Statement of Richard Falk, UN Special Rapporteur on the Situation of Human Rights in the Palestinian Territories on the International day of Solidarity with the Palestinian people:

The United Nations Special Rapporteur on the situation of human rights on Palestinian territories occupied since 1967 wishes to express sympathy for the Palestinian people who continue after more than 43 years to live under Israeli occupation that daily violates many of their fundamental and inalienable human rights.

END_OF_DOCUMENT_TOKEN_TO_BE_REPLACED 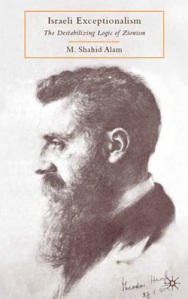 This review of Shahid Alam’s indispensable book was written for Holy Land Studies.

M. Shahid Alam’s latest book “Israeli Exceptionalism: The Destabilising Logic of Zionism” is a fascinating historical analysis, densely detailed and referenced, of the nature and trajectory of Jewish nationalism. It is bracingly honest, dispensing with the usual Western pieties to describe three elements of what Edward Said called Israel’s “ideology of difference.” These are, firstly, the notion of Jewish chosenness and divine right to Palestine; secondly, the ‘miraculous’ creation and survival of the state; and thirdly, the uniquely tragic history of the Jewish people.

Many studies have deconstructed the first two myths. Less attention has been lavished on countering the third, the “lachrymose historiography” of the Jews (in Salo Baron’s words) and its employment to neutralise criticism of the Zionist project. Alam argues persuasively that Zionism was not simply a response to virulent anti-Semitism but also, crucially, the result of Jewish power.

Until the rise of fascism, the trend of Jewish involvement in modern Europe was one of phenomenal success. This is despite recurring episodes of anti-Semitism, particularly in the east. The European Jewish population increased more than tenfold in the eighteenth and nineteenth centuries (the general population increase was by a factor of 3.3). In the same period, Jews moved into the West’s urban power centres. Ironically, anti-Semitic discrimination had “endowed the Jews disproportionately with those assets that would give them vital advantages in Europe’s emerging capitalist societies.” By the early 19th Century, Jews owned 30 of 52 private banks in Berlin. In Vienna in 1900, 62% of lawyers, half the doctors and over half the journalists were Jews. An important strata of Jews now had both money and access to political and cultural elites.

END_OF_DOCUMENT_TOKEN_TO_BE_REPLACED

TheRealNews — Leo Panitch on how the US created financial crisis and European banks have turned the Irish Miracle into a nightmare.

Exeter University’s European Muslim Research Center will launch its new report on the rise of Islamophobia on Saturday 27th November 2010 at the London Muslim Centre, on Sunday 28th November in Birmingham and on Friday, 10th December in Glasgow.

A report published by a UK university has found that since the 9/11 attacks on the US in 2001, arson, criminal damage, violence and intimidation against Muslims in Britain has increased dramatically.

In particular, the authors found that since Muslim communities in small towns are more polarised than in cities, they are more vulnerable to attack and this accounts for higher Islamophobia-related incidents.

The study, Islamophobia and Anti-Muslim Hate Crime: UK Case Studies, was published by the University of Exeter and is part of a ten- year academic research project undertaken by its European Muslim Research Centre.

Ilan Pappe on Al Jazeera’s Frost over the World, discussing the prospects for a future Palestinian state and the means to achieve it. (The interview begins at 9:00 and is followed by an interview with the insufferable Mark Regev)

With more than one billion people around the world considered overweight, why are so many others still starving and struggling to fill their plates? And what can be done to make the global food system more equitable?

Riz Khan interviews the brilliant Raj Patel, author of Stuffed and Starved: The Hidden Battle for the World Food System and The Value of Nothing: How to Reshape Market Society and Redefine Democracy.

I met Gazmend Kapllani, a Greek of Albanian origin, during a recent visit to Germany (for a British Council ‘Our Shared Europe’ conference). He’s a great conversationalist, so I was pleased when he promised to send me one of his books. A Short Border Handbook arrived this morning. I took it back to bed, planning to read the blurb and perhaps the first chapter before adding it to my enormous pile of books-to-be-read. But I read the whole thing in one go.

It’s not a novel but it feels like one, because it’s so lightly yet densely written, full of stories and humour and therefore with a texture more human than journalistic. Part autobiography, part fiction, part philosophy, Kapllani’s book reminds us that a migrant, unlike a tourist, is the weak pole in relation to his host society, and that the weak are never respected, however hard they work. The Handbook’s general ruminations are applicable to any migrant, but it also addresses very specifically the conditions in Albania in the 1990s which forced so many people to move.

It has the following to say about Enver Hoxha. Examples of other fallen dictators will leap into readers’ minds: