Whatever the hearts-and-minds rhetoric at the United Nations, in Syria the Obama administration is feeding the flames of Sunni extremism, and proving once again the truism that the American state is an enemy of the Syrian people (as it’s an enemy, like all states, of all peoples, including the American).

We expected strikes on ISIS. Some of the strongest strikes (and the strikes are far stronger than in Iraq), however, have been aimed at Jabhat al-Nusra (the Victory Front), the organisation from which ISIS split. Nusra is certainly an extremist Salafist group, and is openly linked to al-Qa’ida. Because its ideology terrifies not only minorities but also huge swathes of the Sunni population, it’s also a strategic obstruction in the way of the Syrian revolution. In August 2013 it participated (with ISIS) in the only documented large-scale massacre of Alawi civilians in the conflict. On the other hand, Nusra (unlike ISIS) was until yesterday actually fighting the regime, not other rebel groups. From January, along with every rebel formation, it’s been fighting ISIS too. And its leadership is entirely Syrian. Many Syrians, not necessarily extremist Salafists themselves, admire Nusra’s victories against their most immediate enemy – the Assadist forces dropping barrel bombs and raping and torturing at checkpoints. A sensible answer to Nusra would be to provide weapons and funds to Free Army forces who would then be in a position to gradually draw men from the organisation, slowly making it irrelevant (most men don’t care about the ideology of their militia’s leadership; they care about food and ammunition). But the Americans are allergic to working with the people on the ground most immediately concerned by the outcome, and bomb from the air instead. Nusra is now abandoning front line positions (in some areas the regime may be able to take immediate advantage). One Nusra leader has already spoken of an alliance with ISIS against the Americans.

Syria’s new daily routine: the Americans and Gulf Arabs bomb the Salafist extremists while Assad bombs the Free Army and Islamic Front (and of course civilians – as usual it isn’t being reported, especially not now the televisual US war is on, but about a hundred are being killed every day). The headline in regime newspaper al-Watan reads “America and its Allies in One Trench with the Syrian Army against Terrorism”. The opposition reads it this way too. Several demonstrations yesterday condemned the American strikes, called for America’s fall, and for solidarity with ISIS and Nusra. A sign at one protest read: “Yes, It’s an International Coalition Against Sunnis.”

END_OF_DOCUMENT_TOKEN_TO_BE_REPLACED 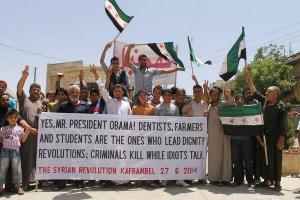 Part of me, of course, is happy to see bombs fall on the heads of the international jihad-fascists tormenting the Syrian people (I refer to ISIS, not the Shia jihad-fascists fighting for Assad, who I’d love to see bombed too). Mostly, I’m just disgusted. In the name of disengagement the West not only refused to arm and supply the democratic Syrian opposition – even as Assad launched a genocide against the people – the United States actually prevented other states from providing the heavy weapons and anti-aircraft weaponry the Free Army so desperately needed. It was obvious what would happen next. The Free Army – and the Syrian people – were increasingly squeezed between Assad and the ISIS monster. And now the Americans are bombing both Iraq and Syria. This is where ‘disengagement’  and ‘realism’ has brought us.

ISIS, like Assad, can be hurt from the air but defeated only on the ground. Obama and the Congress have just agreed to spend $500 million on training 5000 vetted members of the Free Syrian Army – the same people that Obama mocked as irrelevant “pharmacists, farmers and students” a few months ago. The training won’t be finished for eight months, and anyway will be of little use. The Free Army now houses some of the best, most battle-hardened fighters in the world. They don’t need training; they need weapons. In the present balance of forces, in any case, the wounds inflicted by America’s photogenic bombing run may not translate into any improvement on the ground. Only Syrians can improve things on the ground.

The West was not moved to act by 200,000 (at least) slaughtered, or nine million homeless, or by barrel bombs, rape campaigns, starvation sieges or sarin gas. It was only moved when an American was beheaded. The inconsistency is noted well by Syrians. In some quarters, an assault on ISIS which is not accompanied by strikes on Assad and aid to the Free Army will be perceived as a Western-Shia-Assadist alliance against persecuted Sunnis. This could increase the appeal of ISIS and successor Sunni extremist groups.

ISIS has many parents, but the first of these, in Syria at least, is Assad. He released extremists from prison while he was assassinating unarmed democrats. He sectarianised the conflict by setting up sectarian death squads and by bringing in Iran-backed Shia militias from Iraq and Lebanon. His scorched earth policy made normal life impossible in the liberated areas, creating the vacuum in which organisations like ISIS thrived. And until this June, he had an effective non-aggression pact with ISIS, not fighting it, buying oil from it. From January, on the other hand, all opposition militias – the Free Army groups and the Islamic Front groups – have been fighting ISIS (and losing thousands of men in the struggle). These fighters are not about to become an on-the-ground anti-ISIS militia, as the Americans seem to want. They know the truth – that both states, the Assadist and the psychotic-Islamist, are absolute enemies. There’s no destroying one without the other. And both must be destroyed by Syrian hands, not by foreign planes.

END_OF_DOCUMENT_TOKEN_TO_BE_REPLACED

When Dissent magazine recently invited me to write an article on ISIS and intervention, I thought to pick the brains of various Syrian activists, writers and intellectuals. The correspondence that ensued became the article, which appeared on the Dissent blog yesterday. Here’s my introduction:

Conspicuously absent from the debate about ISIS and U.S. intervention—both in the mainstream and in the leftosphere—are Syrian voices. ISIS and U.S. officialdom occupy center stage, leaving the perspectives of Syrian civil society activists and writers out of the equation. While hardly surprising, this omission is troubling.

In an attempt to remedy this imbalance, I asked several Syrians—longtime activists and intellectuals from a range of backgrounds, including Kurdish, Palestinian, and Assyrian Christian—what they think about the ISIS crisis and Western intervention.

David Harvey and Gar Alperovitz dig into the failure of capitalism, the hope presented by worker co-ops, and what activists fighting for a just economy must do to get there.

The following is a sample of the best videos featuring Tony Judt on Youtube, and a small selection of noteworthy articles.

Disturbing the Peace: Intellectuals and Universities in an Illiberal Age

On the 24th of July 2014, when Israel had already massacred 697 Palestinians in Gaza, of whom at least 170 are children, Adama Dieng and Jennifer Welsh of the UN Office of the Special Adviser on the Prevention of Genocide published a statement, which I would characterize as aiding and abating genocide.

The Responsibility to Protect

While acknowledging the incomprehensible numbers of the dead, and the staggering destruction to civilian infrastructure to the besieged Gaza strip, which the UN itself has described as “uninhabitable” even before Israel’s latest onslaught, the Office of the Special Adviser on the Prevention of Genocide seems to see fit to equate the meagre damage inflicted by the resistance of the victims of genocide, to that of the perpetrators of this genocide, as they execute massacres alongside a campaign of mass destruction.

The word Genocide is fast becoming yet another synonym for Israel’s crimes against the Palestinian people, alongside Apartheid and Ethnic Cleansing. I’ve already began to scratch the surface of the applicability of the Crime of Genocide to Israel, by examining the definition provided in the Convention on the Prevention and Punishment of the Crime of Genocide, adopted by the UN General Assembly on December 9th 1948. My conclusion prompted me to create a call to action, calling for concerned citizens of the world to contact the UN Special Adviser on the Prevention of Genocide and demand an enquiry and publish its findings and recommendations as to the possibility that Israel is committing the Crime of Genocide.