You thought capitalism was permanent? Think again. Leading Marxist thinker Professor David Harvey unravels the contradictions at the heart of capitalism — its drive, for example, to accumulate capital beyond the means of investing it.

David Harvey and Gar Alperovitz dig into the failure of capitalism, the hope presented by worker co-ops, and what activists fighting for a just economy must do to get there.

Naomi Klein, Hernando de Soto and Joseph Stiglitz speaking on economic power at the Graduate Centre, CUNY, moderated by David Harvey. See speaker biographies over the fold. From the fora.tv series ‘Is capitalism dead‘? Run time is 62 minutes, with a ten minute preview.

END_OF_DOCUMENT_TOKEN_TO_BE_REPLACED

David Harvey, author of A Brief History of Neoliberalism, and Alexander Cockburn, author of End Times: The Death of the Fourth Estate, don’t think small when it comes to change. They aren’t afraid to think about significant, even radical changes to the social order we’ve grown so used to, whether it’s requiring full employment, reimagining urban living, or repudiating credit card debt and abolishing Wall Street speculation.

END_OF_DOCUMENT_TOKEN_TO_BE_REPLACED

An in-depth interview with Professor David Harvey, the famous Marxist geographer and one of the most compelling critics of the neoliberal architecture of the global economy. His brilliant book A Brief History of Neoliberalism is key to understanding the complex historical and ideological origins of the present economic crisis and the global consolidation of the political project of neoliberalism since the late 1970s. 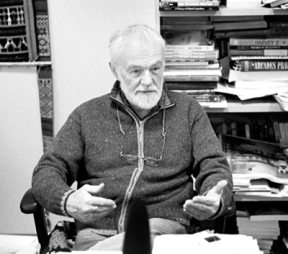 AMY GOODMAN: What do you think is the—what is being proposed by the G20 leaders? And what needs to be done in this country?

DAVID HARVEY: I think Tony Benn was exactly right in the earlier segment, and it’s a great pleasure to be here after him. I was always an admirer of his.

What they’re trying to do is to reinvent the same system. And I think this is a collective concern, and

AMY GOODMAN: What are those fundamentals?