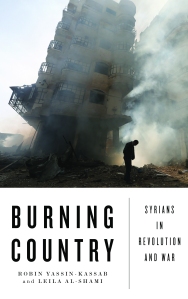 The excellent Books pages at the National have published an extract from our book “Burning Country: Syrians in Revolution and War” (now available in the US too). Before the extract comes an introduction to the book and the situation.

The revolution, counter-revolutions and wars in Syria are terribly misunderstood, particularly in the English-speaking West, by policy makers and publics alike. There are many shining exceptions, but in general poor media coverage, ideological blinkers and orientalist assumptions have produced a discourse which focuses on symptoms rather than causes, and which is usually unencumbered by grassroots Syrian voices or any information at all on Syrian political and cultural achievements under fire.

The consequent incomprehension is disastrous for two reasons – one negative, one positive.

First, the exponentially escalating crisis in Syria is a danger to everybody – Syrians and their neighbours first, but Europe immediately after. Russia’s terror-bombing is creating hundreds of thousands of new refugees. Meanwhile there’s good reason to believe President Putin is funding far-right anti-immigrant parties across Europe. It is very possible that this year’s flood of refugees will re-establish Europe’s internal borders, destroying the ‘Schengen’ free movement area, seen by some as Europe’s key political achievement since World War Two. With eleven million homeless, traumatised people on the eastern Mediterranean, terrorism is sure to increase. And the long-term geopolitical consequences of allowing, even facilitating, Russia, Iran and Assad to crush the last hopes of democracy and self-determination in Syria will create a still more dangerous world for our children. Yet European heads are being buried in the sand. Some still imagine a peace process is underfoot.

And the positive reason. Amidst the depravities of war, Syrians are organising themselves in brave and creative ways. The country now boasts over 400 local councils, most democratically elected, as well as tens of free newspapers, radio stations, women’s centres, and an explosion in artistic production. We shouldn’t just be feeling sorry for Syrians, but learning from them too. Their democratic experiments are currently under full-scale international military assault. They may be stamped out before most non-Syrians have even heard of them.

END_OF_DOCUMENT_TOKEN_TO_BE_REPLACED

I participated on BBC World’s World Have Your Say to discuss the fall of Qusair and the spread of sectarian war as Hizbullah invades Syria in force. Sara Assaf, Kenan Rehmani and Elizabeth Tsurkov also contribute.

An interesting article in the Asia Times (republished in full after the break) states that “in recent weeks more and more former Iranian officials and academics have begun to speak out against the lack of complexity and nuance in Iran’s policy vis-a-vis the perceived deteriorating situation inside Syria.” The article also suggests that Hizbullah is rethinking its position. About time too.

The Asia Times continues: “talking to Iranian officials it appears that there is deep unease about the methods employed by the Syrian security forces which have allegedly killed up to 2,000 people since protests and violence erupted in March. In private, Iranian officials draw a comparison to how professionally Iranian security forces responded to widespread rioting and disorder in the wake of the disputed presidential elections of June 2009. They claim (with some justification) that the disorder was quelled with minimum loss of life.”

The article goes on to list reasons why Iran’s rulers expect the Asad regime to come out of the current unrest intact. Beyond an appreciation of the ruthlessness of regime violence, these include: “the divided nature of the Syrian opposition, the majority of whom hail from a Sunni Islamist pedigree. But deep down Iranian officials believe that Assad will survive because owing to his foreign policy posture and his impeccable anti-Zionist credentials, his regime is somehow more ‘connected’ to the deepest aspirations of his people, indeed the people of the region as a whole.”

END_OF_DOCUMENT_TOKEN_TO_BE_REPLACED

One of my favourite chants from the Syrian uprising is the powerful and cleanly apparent illi yuqtil sha‘abu kha’in, or ‘he who kills his people is a traitor.’ It’s cleanly apparent to me at least – but not to everybody. Some kneejerk ‘leftists’ (a rapidly diminishing number) still hold that the Syrian regime is a nationalist, resistance regime, a necessary bulwark against Zionism, and that therefore it must be protected from its unruly subjects; that in fact it’s the unruly subjects, rather than those who murder them, who are the traitors.

Very sadly, Shia Islamists – Lebanon’s Hizbullah, the sectarian parties in power in Baghdad, and Iran – have repeated the same argument, not because they believe it but for tedious clannish reasons. Syrians aren’t very surprised by the Iraqi or Iranian positions; it’s Hizbullah’s betrayal which sticks in the craw. After all, until Hassan Nasrallah began propagandising on behalf of the regime’s repression, Syrians of all sects supported and admired Hizbullah. During Israel’s 2006 assault they welcomed southern Lebanese refugees into their homes. Indeed, the regime’s alliance with Hizbullah can in large part be credited to the Syrian people; the alliance was one of the regime’s only real sources of popularity. The Asad clique needed Hizbullah’s resistance flag to cover its own nationalist nakedness.

Sectarianism is the old curse of the mashreq, exacerbated in modern times by Sykes-Picot, minority dictatorships, Zionist meddling, and the invasion of Iraq. Lebanon’s political system, indeed the whole idea of Lebanon, is as sectarian as can be. Lebanese Sunnis and Christians are every bit as sectarian as Lebanese Shia, and usually worse. So perhaps Nasrallah can’t help himself. But whatever his excuse he is thoroughly wrong, strategically as well as morally, and his wrongness is public and blatant. Whether or not the Syrian regime falls, Nasrallah’s current position will do more damage to Hizbullah’s ability to fight Zionism, to carry the aspirations of Arabs and Muslims, than any number of Israeli assassinations and bombing runs.

END_OF_DOCUMENT_TOKEN_TO_BE_REPLACED

I’ve been keeping quiet about Syria recently. I’ve been working on other projects. The main reason for this is that I have nothing new to say. The regime continues to spew meaningless words concerning ‘reform’ and ‘dialogue’ even as it escalates its assaults on urban areas and its campaigns of arrest and torture. The rate at which the regime murders the innocent is still shocking, but is substantially less than in earlier months. There is evidence that the killings are now more targetted against protest leaders and organisers – in other words against the intelligent leadership of the next generation. Pro-regime propagandists continue to speak about the Syrian people (their own people) the way Zionists speak about the Palestinian people. Anti-regime violence, understandably, seems to be rising. Very worryingly, there appear to have been sectarian clashes between Alawis and Sunnis in Homs. The regime, with its appalling instrumentalisation of sectarianism since the intifada began, its use of irregular Alawi-majority militias (as the Americans used Shia and Kurdish militias to terrorise restive Sunni areas in Iraq), and through its black operations, bears full responsibility for this. It is to the credit of Syrians that almost universal revulsion met news of the sectarian fighting. Most protestors reaffirmed their commitment to national unity. The protests, meanwhile, have grown to enormous proportions. The governorates of Hama, Deir ez-Zor, Idlib and Homs appear to be lost to the regime. Damascus and Aleppo are now definitely involved. Ramadan will bring a further intensification.

When I get to it, I will write more fully about Hizbullah’s blunder in supporting the regime. Hizbullah used to be wildly popular in Syria because it was perceived as an organisation dedicated to fighting for the oppressed. Now that it’s taken to supporting the Syrian oppressors against the Syrian oppressed, Hizbullah is widely despised in Syria. Its own stupidity achieved what decades of Wahhabi-Saudi, Zionist and Western propaganda could not. Here’s an article by Hamid Dabashi on that.

And here’s a fair documentary from the BBC on the situation in Syria, featuring the brave and long-suffering Riyadh as-Saif.

Will Syria experience a civil war? There’s already a civil war of narratives, pitching the regime’s version against everyone else’s, and a social civil war, in which Syrians find themselves shocked by the responses of their friends and relatives, and find new friends and unexpected allies, realigning their perspectives and values as they do so. Many Syrians are still so scared of the unknown, and so deep in the slave mentality, that they wish to believe what the old authority tells them.

But decreasingly so. Most people have a time limit on their gullibility, or their self-deception. The lies of state TV and the ridiculous ad-Dunya channel, though they come as thick as summer flies, cannot cover the dazzlingly obvious – that the regime is torturing children to death, shooting women and old men, and randomly arresting, beating and humiliating the innocent. That Syria’s tanks and helicopter gunships should be liberating the Golan, not slaughtering Syrians. That the protestors are patriots seeking their basic rights. (I gave up having the argument about Salafis and foreign infiltrators weeks ago on the basis that anyone who wants to believe the regime version will believe it regardless of facts and logic.)

There are still diehards who point to Syria’s social and cultural ills as a reason for sticking with the regime. Give it a chance, they say. Let it reform, as it will undoubtedly do. The alternative is sectarian civil war.

END_OF_DOCUMENT_TOKEN_TO_BE_REPLACED

It’s important to remember that Hizbullah leader Hassan Nasrallah’s speeches consist of more than mere rhetoric. One of the reasons for Nasrallah’s enormous popularity in the Arab and Muslim worlds is that, unlike other Arab leaders, he says what he means and means what he says. Hizbullah is the only force to have defeated Israel – once in 2000, when the brutal occupation of south Lebanon was brought to an end, and once in 2006, when Israeli troops attempted to reinvade in order to dismantle the resistance, but bled on the border for five weeks instead. During the 2006 war Israel bombed every TV mast it could find, but failed to put Hizbullah’s al-Manar off the air. Nasrallah spoke on al-Manar of “the Israeli warship that attacked our infrastructure, people’s homes and civilians. Look at it burn!” As Nasrallah uttered these words, a Hizbullah missile did indeed disable an Israeli warship, forcing Israel to move its fleet away from the Lebanese coast.

In mid-February 2010, Shaikh Nasrallah made a speech which may well mark a fundamental change in the Middle Eastern balance of power. The speech, quoted below, should not be read as a string of empty threats, but a signal of new weaponry and fighting capabilities.

END_OF_DOCUMENT_TOKEN_TO_BE_REPLACED

It’s two years now since the assassination of top Hizbullah operative Imad Mughniyeh in Damascus. Hizbullah is still promising retaliation ‘at a time of its choosing’. Meanwhile, Israel’s assassinations of resistance figures continue – most recently Hamas’s Mahmoud al-Mabhouh was murdered in Dubai. The Emirati regime has taken no retaliatory action. I wrote the following in the immediate aftermath of Mughniyeh’s killing.

In this post I will jettison my chances of ever being granted an American visa (update: I have since been granted an American visa), by committing imperially-defined thought crime and supporting the strategy, if not all the tactics, of the martyred resistance leader Imad Mughniyeh. In today’s sad world you can be demonised, even prosecuted, for refusing to sing the ideological chorus with Israel (specifically Danny Yatom) that assassinations of resistance fighters represent “a great achievement for the free world in its fight against terror.” But I believe it is important not to be cowed by such hypocrisy and intimidation.