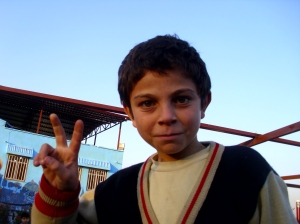 This was published at the National.

Syria is my father’s country, where I spent an important part of my young adulthood, where my son was born. Living there was inspiration for my first novel (though it’s set mainly in London). In fact, I fell in love with the country – with its enormous cultural and historical heritage, its climatic extremes, and its warm and endlessly diverse people. Of course there were moments – for example, visiting a broken man who’d been released after 22 years imprisonment for a ‘political offense’ – when I felt like getting the next plane out. And before too long I did move on, because a stagnant dictatorship was no place to build a future.

Then in 2011 the revolution erupted. This instant of hope was followed by a counter-revolutionary repression of unprecedented ferocity. How to respond? For a long time I wrote and spoke to anyone who would listen on one theme: the necessity of funding and arming the Free Army – civilian volunteers and defectors from Bashaar al-Assad’s military. Nobody did arm them, not seriously, and as a result the Free Army lost influence and Islamist factions filled the gap. Assad’s calculated manipulation of sectarian fears and hatreds produced a Sunni backlash. Al-Qa’ida franchises set up emirates near the Turkish border, and the West increasingly understood the Syrian drama not as a battle for freedom, but as a security issue. In illustration of this fact, I was stopped at Edinburgh airport as I started my most recent trip to the Turkish-Syrian border, in December, and questioned under the UK’s Terrorism Act. “Which side do you support?” they asked me. I explained there are many sides now, but the question seemed to be either/or: either the regime or the jihad – and support for the (genocidal) regime was the answer which ticked the ‘no further threat’ box.

END_OF_DOCUMENT_TOKEN_TO_BE_REPLACED

Mohammad Ojjeh made a short film in which the children of the Salam School for Syrian refugees in Reyhanli, Turkey, speak about their experiences and the Karam Foundation’s Zeitouna programme.

After provoking an armed uprising by his suppression of a non-violent protest movement (using rape, torture and murder on a mass scale), Syrian dictator Bashaar al-Assad lost control of large areas of the country. He then subjected those areas to a scorched earth policy, burning crops, killing livestock, shelling with artillery, dropping barrel bombs and cluster bombs from war planes, firing cruise missiles and sarin gas. Schools, hospitals and bakeries have been particularly targeted, alongside economic infrastructure. As a result a THIRD of Syrians, over seven million people, are now displaced. The Syrian winter is as cold as the Scottish winter, and this year millions of people will not be living in their homes but in half-demolished buildings, under trees, and in tents.

What’s the connection to the strange photograph of me? Well, I have shaved off my beard (the moustache and the central part of my monobrow will go on December 3rd). Such a traumatic assault on my facial hair, my very identity… Why? In the hope that you, dear readers, whatever your take on the conflict in Syria, will sponsor me, or in plainer terms, will donate some money. You can do so here. Every twenty dollars (or equivalent) buys blanket, coat and hat for a Syrian child. (If you remember, donate to Robin/ Wassim/ Team UK). I know the organisers of this charity and can vouch that they are absolutely honest, that every single penny will go to keeping a Syrian child warm this winter. Please do donate, and please share this page. We just have a few days to raise as much as we possibly can.

While I have your attention, please sign this petition to ask the British and French governments to boycott Rosoboronexport, imperialist Russia’s primary arms supplier to Assad’s genocide.

Syrian-American architect Lina Sergie Attar is the founder of the Karam Foundation and its Zeitouna project which brings hope to Syrian displaced and refugee children, many of whom are traumatised, all of whom have lost great chunks of their schooling. Pulse co-editor Robin Yassin-Kassab participated in June’s Camp Zeitouna in the Atmeh camp on the Syrian side of the Turkish border. In this moving piece, originally published at the New York Times, Lina describes the workshop she led with the children in their hot and dusty tented school – mapping a floor plan of their abandoned homes – and what it meant to them. Please donate to the project and Karam’s other work inside Syria here.

“We comfort ourselves by reliving memories of protection.”

Gaston Bachelard, The Poetics of Space

Standing in a stuffy tent while facing over forty children crowded onto small benches, their dusty faces propped up by weathered, lean arms, I feel a bit nervous. They study me curiously. I tell them that I’m Syrian, from Aleppo, and that I’m an architect. I turn towards the cracked whiteboard and begin to draw with the streaky, half dried-up marker. “I haven’t been to my family’s home for over two years. When I miss it, I remember it like this.” Without turning around, I say, “Let me tell you a story about my home.”

After enduring two and a half years of the grueling brutality that defines Syria, the fall of Assad’s regime is no longer the most pressing concern of most Syrians. Rather, “When will we return home?” is the question that haunts the over seven million displaced Syrians. Of course, the fact that the first concern is the reason the second one exists adds to the country’s mass despair.

Last winter in Atmeh, the largest of Syria’s border camps for the internally displaced, the longing to return home was repeated to me over and over — sometimes in anger, other times in sorrow. I could not answer their inquiry, “Will we ever return home?” except with the traditional, “God  willing.” A response that should have been comforting if my wavering voice hadn’t betrayed my uncertainty.

When I returned to Atmeh last June, the camp had doubled in size from 12,000 to over 24,000 people who had fled their villages and towns to seek refuge in rows of tents between the olive trees — literally in no man’s land. They were as I had left them, still surviving without running water, electricity, and adequate sanitary services. The biting cold of December had been exchanged with the suffocating summer heat. The snow-white tents were now permanently coated with brown dirt streaks. The camp which had been still in formation a few months before, now felt unsettlingly settled.

I did not return alone. I returned with a team of Syrian expatriates to hold an educational mentorship program for displaced children called Zeitouna. The idea behind Zeitouna was to inspire and engross Syrian children with creative and athletic workshops that would engage their young minds. We returned to show them that they mattered. And that they had not been forgotten.

END_OF_DOCUMENT_TOKEN_TO_BE_REPLACED

People are asking me how they can help the victims of the genocidal repression in Syria. Those who engage in political debate can struggle against the orientalist, Islamophobic, or statist-ideological misinterpretations of the media which have obscured the reality of the revolution and convinced large swathes of public opinion that the Syrians should be left to face Assad’s war machine unarmed. Those who don’t do politics, or who are honestly confused about the rights and wrongs of the crisis, can donate money.

I have worked with three charities on Syria. I can vouch that all three are honest and efficient, run by intelligent people, and that they do immediate work on the ground in Syria helping displaced people and those holding out in their bombed towns and villages. Syria Relief is UK-based. The Karam Foundation and the Maram Foundation are US-based. I’m sure all three can receive donations from anywhere in the world. Please remember that the Syrian tragedy is unsurpassed in contemporary history, worse than the Iraqi crisis in 2006/2007. The daily death toll is equally high; the numbers of displaced – well over a quarter of the country’s population – are much higher.

Here’s a short film on the work of Camp Zeitouna, a project of the Karam and Maram Foundations.