In the following, Allyson Pollock gives a talk on the privatisation of the NHS. 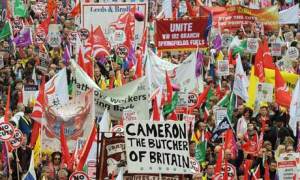 Today was the long awaited TUC-led “March for the Alternative” in London, calling for jobs, growth and justice, in the face of the savage programme of public sector cuts imposed by the Tory-led coalition government, which I have been covering since October in a series of hard-hitting articles under the heading, Battle for Britain: Fighting the Coalition Government’s Vile Ideology.

Those of you who have been following my work closely will understand that I was not able to be on the march today, as I’m in St. Thomas’ Hospital, where I’m undergoing treatment for a serious and painful blocking of the blood supply to the toes of my right foot, caused by arterial damage. However, with my magnificent overview of the march from the 11th floor window of my hospital room, overlooking the Houses of Parliament, Westminster Bridge and today — crucially — the Embankment, where the march began at 12 noon, I’m able to confirm that this was undoubtedly the biggest protest I’ve ever seen, with the noble but ultimately doomed exception of the February 2003 demonstration against the Iraq War, which, with an estimated two million attendees, was by far the largest protest in British history.