95 hours and the Polls will open 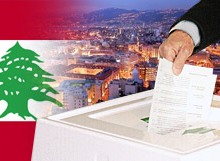 As election volunteers in Lebanon work this morning to spruce up its hundreds of Polling Places for Sundays’ election, Minister of Education Bahia Hariri, sister of the murdered Rafiq, canceled school for Saturday and Monday as a precaution, and the US Embassy just an hour ago issued an advisory for Americans to avoid public places and “reminds American citizens in Lebanon that even peaceful gatherings and demonstrations can turn violent unexpectedly.” As for the voters, they are preparing to elect 128 Parliamentary Delegates from more than 550 candidates who theoretically will chart this country’s course over the next four years.

Beirut’s airport is jammed with thousands of Lebanese, often given free tickets, arriving to vote from all over the world, but most heavily from the US, Canada, and Europe.

More than two dozen candidates have dropped out of the race (and may now be millionaires if they were not already). This electoral phenomenon regularly happens just before the voting in Lebanon. One drop-out candidate confided to a Carter Center STO (short term observer) that he put two kids through college in France with what he earned by abandoning his candidacy.

It works as follows: A would be Parliamentary announces a candidacy, sometimes with great fanfare and appropriate solemnity perhaps giving speeches about the need for Lebanon to be a beacon of democracy which elects Deputies based on merit and who are immune from corruption etc. They campaign furiously for several weeks gathering as much media and credibility as they can. Then they quietly approach their relevant Zai’im (chief or power broker) and begin their real project which is to sell their withdrawal for as much cash as they can get in exchange. One could ‘earn’ a cool million in cash or more depending on the electoral district and how much voter appeal the candidate can demonstrate. A final press conference is then called to announce gravely that for the greater good of the Republic of Lebanon, national unity, the Church or Umma, that the candidate is reluctantly ending his campaign, making a personal sacrifice, and, incidentally is endorsing his ‘opponent.’

More than a dozen foreign organizations are in Lebanon monitoring the voting, including the European Union, and the Atlanta-based Carter Center which launched its election observation mission to Lebanon in early February 2009. It now has 50 short-term observers, after receiving formal accreditation from Lebanon’s Ministry of the Interior and Municipalities in March. It has also dispatched six long-term observers to monitor the electoral process in all 26 electoral districts. They plan to stay in Lebanon until the end of July to monitor the post-election environment, including the complaints process while it assesses the electoral process in Lebanon against the relevant legal framework, including Lebanese election laws, the Constitution of Lebanon, and Lebanon’s international commitments. So far they have found some ‘irregularities’ but have not yet issued a formal report.

In the Burj Abu Haider section of Beirut this morning (pro March 14th neighborhood) this observer found two main subjects being discussed by pro-Hariri poll workers. One is the concept of ‘Hasana Niyabya’ or Parliamentary Immunity. This is important because in addition to the 38 alleged spies arrested — made possible by Hezbollah intelligence and technology working with Lebanon’s Internal Security Force (ISF) — it is rumored that no fewer than four current members of Parliament allied with the US Team are going to be arrested for spying for Israel following Sunday’s voting. The post-election arrest of two Cabinet Ministers and “a higher political figure” are also hinted at. They are safe until they lose their Parliamentary immunity when the votes are counted to create a new Parliament or unless the new Parliament passes a third Immunity Law very fast to shield wrongdoers (two earlier “let the past be the past and we can move forward” amnesties were enacted in 1992 and 2005). It was the fear of “Israeli spy outings” that dominated Joe Biden’s agenda when he met with the US Team last month. The Majority wanted US help in postponing the election, and thereby retaining Parliamentary immunity, but Joe said no. This issue is just one reason that observers here are predicting fireworks after the votes are counted.

“Is he/she an Israeli spy?”, is a question being asked a lot this week. If someone ‘high up’ does not show up for work at a government ministry, the whispers flow.

At 9:00 am this morning, President Michel Suleiman visited the headquarters of the General Directorate of the internal security forces (ISF) in Ashrafiyeh, East Beirut, to be briefed on achievements made in the arrests of Israeli spy cells. Police chief Gen. Ashraf Rifi on Tuesday expected more arrests in the investigation into spying for Israel that has already led to dozens of people being arrested.

“We have not completed the mission,” Rifi said. “We have files that are still being prepared for arrests.”

The wave of arrests began in April with the detention of former ISF Brig. Gen. Adib al-Alam and has now included two serving colonels in the Lebanese army as well as at least five members of the security forces. “Most played central spying roles and confessed to falling into the snares of the Israeli enemy,” Rifi to the media, citing sex, money and politics as possible motives behind the detainees’ decision to spy for the Israeli secret service, Mossad.

What is making some politicians nervous is Suleiman’s pledge to hold those responsible for any security breach during and following (emphasis mine) the elections accountable.

Another new issue being discussed by poll workers is Minister Fouad Siniora’s announcement this morning of the existence of “information and reports whereby cases of ID forgery have been recorded.”

Why this observer took special notice of the announcement by Siniora is because of what has been happening in some villages. It relates to what this observer calls the “Rent Voter’s ID Initiative”. It is practiced mainly in the South and works as follows: Longtime Hezbollah Shia nemesis, Ahmad al-As’ad has set up an anti-Hezbollah Shia organization called the Lebanese Option Gathering and has fielded 19 candidates against Hezbollah. He openly admits getting large amounts of Saudi cash to complete against Hezbollah in the South and the Bekaa and is thought to be allied with the pro-US Hariri team. As’ad knows his group cannot win and that the overwhelming number of Shia will vote for Hezbollah. His goal is not so much to get voters to vote against Hezbollah, but to keep them from voting for Hezbollah. Then when the votes are counted, Israel and the anti-Hezbollah centers can declare that “Hezbollah is losing support among its base, because it got fewer votes than in 2005″ etc.

To make this happen, As’ad operatives having been “renting” Voter ID Cards for up to $1000 each. The cards are turned over in exchange for $1,000 and are to be returned on Monday July 8 after the votes are counted. One Shia fellow from Bint Jbeil claims to have ‘rented’ 20 family Voter ID cards to As’ad operatives and was paid $20,000 plus a new car for the family and new Nokia phones for the teenagers. After the election, it can be determined how well this campaign tactic worked. But Siniora’s announcement confirms what this and other observers predicted, that shrewd voters might just print up forged Voter IDs to increase income and still be able to use their originals to vote for Hezbollah. As’ad operatives seem at the moment to be holding quite a number of forged IDs. Fireworks are expected following the vote count.

Speaking of fireworks, the recent State Department announcement that for the first time since the 1979 Iranian revolution, Americans can invite Iranians to our July 4th Independence Day celebrations may have landed this observer in hot water again with his beautiful Ambassador, Michele Sison.

A Dahiyeh friend reminded me that last year on July 4th, I joined other Americans at the Cemetery in Beirut to honor those who died for their country. The Ambassador was critical of my visit to the hallowed ground where Hadi Nasrallah, son of Hezbollah’s Secretary General and Hezbollah Military Commander Imad Mugniyeh are buried among hundreds of their compatriots. She took exception to remarks regarding the right and responsibility to resist occupation whether it is the British in 1776 or the Zionists today, and she saw no similarities at all between Tom Payne, Thomas Jefferson, Patrick Henry or George Mason and Palestinian and Lebanese Resistance writers like Mahmoud Darwish, Edward Said, Sayeed Mohammad Hussein Fadlallah, Imam Musa Sadr and others. When she asked on Lebanese TV “Why was he there?” and I replied ‘Why was she not there?”, our relationship suffered and has had its ups and down since.

Hopefully I have not gone too far this year but by pure coincidence, it was no sooner than last Friday’s State Department announcement was released than I received an invitation to attend the Iranian Embassy-organized 20th Anniversary Tribute to the late Imam Khomeini at UNESCO Palace. (The spiritual leader of Iran, who led the Iranian Revolution, passed away on June 3, 1989).

Well, it was a solemn, dignified and also celebrative and accepting, quite friendly, atmosphere and event.

When asked to speak, I made clear that I was a private citizen but as an American, I hoped for improved relations between our countries based on mutual respect and common long term interests which included, in my view, the return of Palestine to its rightful owners. And then for some reason, no doubt related to the warm atmosphere, I ended my remarks with an invitation to the whole audience of hundreds, to next month’s American July 4th celebration. The audience included Iranians, Lebanese, Syrians, Palestinians, and many others from Hezbollah, Hamas, Islamic Jihad, and scores of other organizations.

I have yet not heard whether Michele will allow us to use our Embassy but usually the July 4th party has really good hamburgers, hot dogs and potato salad, none of which are easy to find here in Lebanon.

Franklin Lamb is doing research in Beirut. He is reachable at fplamb@sabrashatila.org.