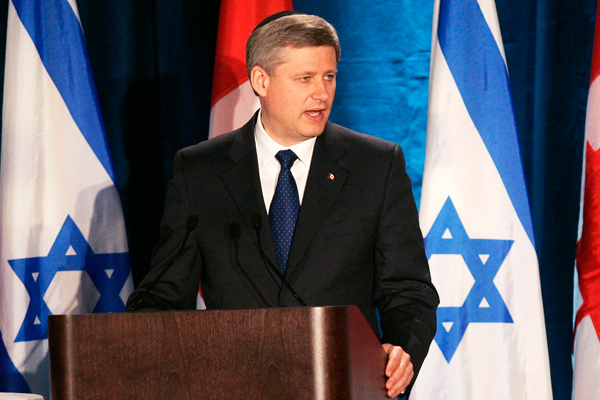 In January, Canada stopped contributing to the United Nations Relief and Works Agency (UNRWA). It is the latest in a series of decisions that have seen Ottawa ‘out-Israeling’ Washington. It had previously stopped funding KAIROS (Canadian Ecumenical Justice Initiatives), an NGO that had been supporting human rights groups in Israel and the Occupied Territories. In each case, the government of Stephen Harper seemed to be responding to, or rather pandering to, rabidly pro-Israeli Jewish groups in Canada. Israel itself has certainly never encouraged an end to the funding of UNRWA, an institution that for decades has, in effect, been paying some of the bills for the occupation.

Although camouflaged internationally by a similar drift in British and Australian policy, Ottawa has moved far from its own earlier positions, and possibly farther than either London or Canberra. Indeed, the Obama administration’s muted criticisms of Israeli policy sound relatively ferocious compared with Canada’s gestures towards the administration of Binyamin Netanyahu.

Once upon a time, Canada was a paragon of international virtue: supportive of the UN and happily putting distance between itself and its southern neighbour on the Middle East. Then came Stephen Harper. Ottawa did not join the Iraq war, but that was more a function of strong Canadian public opinion and Harper’s parlous electoral position than any considered choice.

Canada led the walk-out at the Durban conference on racism and was the first to cut aid to the Palestinian Authority when Hamas won the Palestinian parliamentary elections in 2006. It applauded Israel’s right to “defend itself” against Hizbullah (a “measured response”, according to Harper), and against Hamas in Operation Cast Lead.

The move in the Conservative Party has also pulled the Liberal Party a significant distance from the principles of Pierre Trudeau, leaving only the New Democrats and the Bloc Québécois to uphold international law. Indeed, the first turns in policy came under the previous Liberal government, ironically with human rights stalwarts in its ranks like Irwin Cotler and Liberal leader Michael Ignatieff, who, in 2006, suggested correctly that Israel’s shelling of the UN post at Qana in southern Lebanon (in which a Canadian officer was killed) was a war crime.

Ignatieff was criticised so strongly for his remark that he ended up apologising for it, and last May he commented on the Conservative bid for Jewish votes: “It is beyond reckless for political leaders to try to score points by branding one another as ‘anti-Israel’ — to try to win votes by claiming a monopoly on supporting Israel. My party will never claim to be the only genuine defenders of Israel in Canadian politics because I don’t want my party to be alone in the defence of Israel. I want all parties to be genuine defenders of Israel.”

Yet why would anyone want to defend another country so uncritically, let alone one that had killed a Canadian soldier? How did these sincere defenders of human rights allow themselves an Israeli exception?

It is not just the multilateralism and commitment to the UN that have been a cornerstone of Canadian policy since 1945, it is also the particular application of that policy to the Middle East. To look at the official Canadian Foreign Affairs website, a Likudnik might think it had been drafted by the PLO’s legal department. Canada does not recognise the annexation of East Jerusalem, considers the territories to be occupied and the settlements to be contrary to the Geneva Conventions. It calls the West Bank barrier illegal and supports the Arab peace initiative, which is, of course, based on the 1967 boundaries.

Which leads to the basic paradox: why is Ottawa so fervent in support of an Israeli government that flaunts its denial of all these positions, whose prime minister only a week ago was declaring that the settlement in which he was planting a tree would always be part of Israel, and whose administration is evicting Palestinians from East Jerusalem and building that illegal barrier?

If you delve into the official US State Department positions you will find a similar, if somewhat less explicit, exposition of and support for the accepted international legal position on the issues. But the gap between Canada’s legal position and its diplomatic gestures is amazingly wide.

On one level, it is a cynical electoral ploy. Canada’s Jewish vote is small but concentrated in areas that include key marginal ridings (constituencies). By pandering to Israel, Harper hopes to dislodge enough votes to swing the balance. Some Canadian observers also suggest it appeals to the evangelical element in the Western prairie states that provides much of the Conservative vote.

On the face of it, the strategy could backfire since there are approximately three times as many Canadian Muslims as Jews. Indeed, in the absence of adequate polling, it is possible that ‘official’ Jewish leaders, like many of their colleagues in the US, exaggerate the degree of support for Netanyahu’s Israel in their traditionally Liberal and liberal community.

It is also possible that they have gone too far with defunding UNRWA. Penalising refugees to pander to groups of fanatics with dubious political support seems to have provoked a backlash from many Canadians, who want to know who made this decision, when and why.

First published in Middle East International and the author’s weblog.

One thought on “Canada’s pandering to Israel”