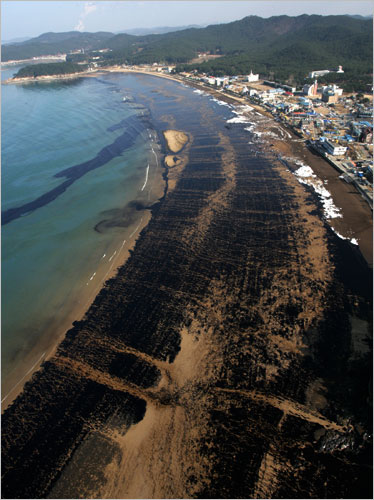 For unlucky residents of the Gulf States, the BP oil-spill disaster, coming up on 100 days, could take another turn for the worst if one of the storms churning up tropical waters in the Atlantic Ocean blossoms into a full-blown hurricane and heads into the Gulf of Mexico.

For several already marginalized Native tribes living on the Louisiana Coast – many of them fishermen and shrimpers – a hurricane crashing through the oil-polluted Gulf now could destroy a way of life that has survived for centuries.

Already, the tribal land among the coastal bayous is disappearing faster than anywhere on the planet, the victim of unbridled oil exploration and dam building projects of the Army Corps of Engineers dating back to the 1930s.

“For us it’s more like a hundred years of oil disasters than a hundred days,” said Chief Charles Verdin of the Pointe au Chien tribe. “And really when you look at it … it’s business as usual. The tribes being ignored, forgotten, overlooked, and forced from their land.”

But Verdin said there is one new and potentially devastating difference, “the amount of oil that is now in the Gulf.” There is renewed fear among his people that they will be “forcefully removed” from their land if it becomes polluted by oil sludge and dispersants, he said.

“The real worry right now,” he said, “is that the storms will get bigger, come in, and flood our area like it did for Katrina and Rita and also Gustav and Ike. Then we were flooded with water but as soon as the water receded we were able to move back in, clean our homes, clean our lands and basically move back in.”

However, now, the Chief said, “the biggest worry is if the oil comes in with the water, and it contaminates our communities. Then they may hold us back and say we can’t come back to our community because the land has been poisoned. So people are worried if they leave, they will not be able to come back and no telling how long that it will be: Yes, the hardest thing to imagine or even begin to fathom is not being able to come back home.”

The Pointe au Chien and Biloxi Chitimacha tribes reside in the bayous flowing to the coastal plains in Terrebonne and Lafourche Parishes. The tribes represent the last vestiges of Louisiana’s “Petite Nations,” whose history dates back centuries.

“Starting back in, I guess, the early ‘30s, ‘til now really,” Verdin said. “They found some oil in our areas and they basically took over our land. They’d sent people here saying they were going to lease our land from us. Our people didn’t know they were signing a deed, you know selling their land to the oil companies. …

“Then they just came in, put up some markers, dug some ditches, canals, whatever you want to call them … and just squared off an area and said it was their property; and the Indians of that town did not know how to fight. They were uneducated, plus they didn’t have no money, or the means to be able to fight them.”

The oil prospectors were ruthless, the chief said, coming in with huge machinery, spoiling the bayous by cutting through the swamps, destroying vegetation and introducing toxic materials. They also demonstrated a disregard for sacred burial sites and ancient cemeteries.

Verdin said the prospectors “made a canal right on an Indian mound that is a thousand years old. And right now the mound is basically falling into that canal. In the late ‘60ss we caught them as they were coming to cut straight across a huge cemetery that we had.  But our people went out there and stopped them…with guns. …

“We had a little stand-off, and before it got out of hand, the people who were running these machines to cut the canal – [who] were from the area but they were white people that these oil companies had hired and they said basically they didn’t want to have no part of it – so they just got off the machines and told the oil companies they were not messing with the Indian people.”

Patty Ferguson, a member of the Pointe-au-Chien tribe and a social policy attorney who works with the Costal Tribes Coalition, said her people face an uphill battle because they are an unrecognized tribe, meaning they have no rights under federal law. Plus, they are surrounded by oil profiteers who for decades have used racist laws to exploit the tribe.

“Our bayou parish was once very lush, very green,” Ferguson told me in a radio interview. “Our people planted a lot of agriculture; we had cattle; we even had a sugar plantation where we grew sugar cane and brought sugar to market to sell.

“But the land is not able to be used in this way any longer. A lot of our trees are dead because of salt water intrusion which is caused from various factors; the rerouting of the Mississippi, the oil cuts, the many oil cuts, for oil exploration in the land which has brought in salt water and caused the land to break down. Many of these canals that have been cut haven’t been filled in. And then the lack of protecting the barrier islands which have just been reduced again.

“And so because of that, our community is very vulnerable to flooding already, to hurricanes. In the past few years, hurricanes that hit over a hundred miles away brought eight feet of flood waters in our community because of our lack of defensive measures to protect our communities.”

Ferguson said the Pointe-au-Chien are even more vulnerable than other tribes because the federal government refuses to recognize them as a tribe.

“Because we are not federally recognized, … we’re not able to defend the land in the same way other tribes would be able to bring legal actions to defend the land that our people have been living on for many, many years, for centuries.”

BP and the Last Hundred Days

In the face of the BP blowout – with millions of gallons of oil mixed with chemical dispersants fouling the Gulf and its shores – Ferguson said local officials were slow to even listen to the tribe.

“It took about 90 days” for the politicians “to agree to meet with tribal leaders and hear their concerns,” she said, particularly their insistence that local people continue to guide the clean-up, not only because of the income that is being lost from the bans on fishing and shrimping, but because the tribal people know the land, understand the flow of the estuaries and are aware of where the sacred sites are located.

“Due to some political pressures,” she said, “there is a threat that they will shut down our staging area because now that the BP well has been capped, there may be no more need for our people to be working.”

However, Ferguson said she doesn’t believe the worst of the spill is over, given the extent of the damage already done and the amount of oil that has been spewing into the Gulf for the last 14 weeks. Indeed, she fears the worst may be yet to come and the problem could be complicated by more “outside” people coming into tribal territory.

“Our people have gone through all the training, the hazmat training and the training to lay the boom,” she said. “And the first priority of our program is to protect our sacred sites, to lay boom, to protect the sacred areas. We have numerous cemeteries along the bayou and we also have historic Indian mounds.”

“But there have been complaints by outside people — who don’t live in the community, who aren’t fisherman — that they are not able to work in our area,” she said. “So we were told … that this would be an opportunity to shut our operation down, to allow other people who haven’t been able to work, to give them jobs, and  that they would be working out of another operation center.

“Obviously we feel very strongly that that would be inappropriate, that no one else should be working around our sacred sites and that because we are in full swing of the hurricane season, it would be irresponsible to shut down our local staging area.

“And also, just because you don’t see oil on the surface, we are particularly concerned about oil under the surface and also the dispersants that are in the water and what will be done with regards to those issues.”

Chief Verdin said It took more than 13 weeks of the spill, for the local Parish president, the chief executive for the tribal areas, to meet with tribal leaders.

“From what we understood, they were going to shut us down completely and have people from other staging areas come here and take our place at cleaning up our lands,” Verdin said. “We could do a lot better job than if you send somebody else from outside; they come just to do a cleaning and really don’t care about the property. … They just there for a dollar, whereas our people are there, we are trying to save our own land… We’re experienced in the marshes.”

Verdin said the local officials agreed to leave the tribal staging area open, but he added, “from what I hear him, they are still watching us close, they’re just waiting for us to do any little mistake, anything wrong.  So they will have an excuse to shut us down.”

Ferguson said the long history of racism and exploitation add to the tribe’s suspicions. “I just think it’s just a perpetuation of ignoring the Indians; I think people have that feeling,” she said.

Chief Randy Verdun, who represents the Lafourche Band of Biloxi-Chitimacha, said the Native peoples in the area are extremely concerned that a “real bad storm” could bring in more oil and pollute the bayous, essentially putting an end to a way of life that has gone on for centuries.

“Things are going okay as long as they can collect the oil,” Chief Verdun said. “But if the storms come, that changes all the dynamics of the situation and the problem that we have. But again, if that oil is pushed on shore … the flooding doesn’t occur just on the coast it comes miles in and that oil basically covers hundreds if not thousands of square miles along the coast. Then, how do you clean that up? “

“It is one thing,” said Chief Verdun, “when you can get it while it’s still in the water. But once it’s on land that’s a massive undertaking. And again, I think our people will be displaced and be forced to move, until a time that this stuff is cleaned up.

“And I think in some cases, they’ll say it’s not worth it and they’ll probably come in and render the dwellings of our members uninhabitable. And we’ll be destroyed.”

Dennis Bernstein based this report in part on interviews done for “Flashpoints” on the Pacifica radio network. You can access the audio archives at www.flashpoints.net. You can get in touch with the author at dbernstein@igc.org. This article was originally published at Consortium News and was republished with the permission of the author.