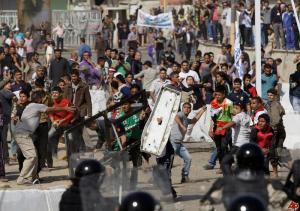 This was published at al-Araby al-Jadeed/ the New Arab. The texts referred to are Ali Issa’s Against All Odds: Voices of Popular Struggle in Iraq, and Sam Charles Hamad’s essay ‘The Rise of Daesh in Syria’, found in Khiyana: Daesh, the Left, and the Unmaking of the Syrian Revolution.

A great deal has been written on the factors behind the rise of ISIS, or Daesh, in Iraq and Syria. Too much of the commentary focuses on abstracts – Islam in total, or Gulf-Wahhabi expansionism, or a vaguely stated American imperialism – according to whichever axe the author wishes to grind. And too much describes a simple split in these societies, and therefore a binary choice, between different forms of sectarian authoritarianism – in Iraq it’s either ISIS or the US and Iranian-backed government’s Shia militias; in Syria it’s either ISIS or the Russian and Iranian-backed Assad regime forces.

To take this representation seriously, we must force ourselves to ignore the very real third option – the non-sectarian struggle against the tyrannical authoritarianism of all states involved, whether Iraqi, Syrian or ‘Islamic’. Hundreds of democratic councils survive in Syria’s liberated areas, alongside a free media, women’s centres, and a host of civil society initiatives. In Iraq too, though it holds no land, there is a potential alternative, at least a gleam of light. The Iraqi state’s attempt to smother this gleam is an immediate and regularly overlooked cause of ISIS’s ascendance.

In his indispensable essay “The Rise of Daesh in Syria” (part of the collection “Khiyana: Daesh, the Left, and the Unmaking of the Syrian Revolution”), Sam Charles Hamad unpicks some of the more common ISIS-related myths. While acknowledging the connection between ISIS and the Iraqi Baath, he warns against overgeneralising it. And while accepting some ideological continuity between ISIS and Saudi Arabia, he writes against the conspiracy theories that Saudi Arabia or Turkey are actively funding and arming ISIS, pointing out that ISIS has repeatedly attacked both – even staging small military incursions into Saudi Arabia.

He quotes an ISIS statement which encapsulates the organisation’s refusal to recognise any state authority other than its own: “The legality of all emirates, groups, states and organisations becomes null by the expansion of the khilafah’s authority and arrival of its troops to their areas.” Why would the Sauds or Turks be so exceptionally stupid as to back an entity which aims to immediately supercede them?

Rather than funding ISIS, Saudi Arabia has funded its most effective enemies. The devastating rebel blitz which cleared ISIS out of western Syria in early 2014 was led by the Saudi-backed Syrian Martyrs Brigade. When the Obama administration allowed, the nationalist-democrats of the Free Army’s Southern Front also benefitted from Saudi largesse. So did Jaish al-Islam, an Islamist militia which has previously stooped to viciously sectarian rhetoric, but which is also the most effective enemy of ISIS in the Ghouta region.

ISIS seizes its arms from Iraqi and Syrian military bases. Most notably, it inherited vast amounts of American equipment from the fleeing Iraqi army in the summer of 2014. And it is self-funding. Hamad quotes a breakdown of finance sources from the Deir al-Zor region which shows that 44.7% of revenues came from property confiscations, 27.7% from oil sales, 23.7% from taxes, and 3.9% from electricity charges. The sale of looted antiquities and the extortion of hostage ransoms add to the pile.

In Syria, Assad’s scorched earth provided zones ripe for conquest. ISIS projected strength by spectacular brutality and thrived by a “conspiracy of pragmatism, involving what can only be described as a tacit or low-level cooperation with the Assad regime.”

In Iraq, an “environment of authoritarian brutality” was the context in which the ISIS predecessors grew. Saddam Hussain taught brutality by example and heightened sectarian resentments to divide and rule. In 2003 the Iraqi state, army and police forces were dismantled not by the people but by the United States. The occupation then reconstituted Iraq’s body politic according to an informal sectarian quota system.

Shia parties linked to the Iranian regime won power. For years extremist Shia and Sunni militias played out a brutal civil war on the bodies of Iraqi civilians. Eventually Sunnis aligned with the US in order to expel al-Qaida, and Shia leader Moqtada al-Sadr dissolved his lawless Mahdi Army.

Yet the new government, by now led by Nuri al-Malki, continued to discriminate against the Sunni community. The de-Baathification pretext was used to bar even nurses and teachers from employment. Security forces routinely arrested and held Sunni men until their families paid for their freedom. Meanwhile Malki refused to incorporate into the army the Sunni fighters who had vanquished al-Qaida. Facing unemployment and institutional prejudice, some drifted towards more extreme military formations, including ISIS.

But the Iraqi mood, though wounded, was not irredeemeably divided by sect. In February 2011, during the regional Arab Spring moment, a cross-sectarian and cross-regional protest movement covered the country. Sit-ins and demonstrations, sometimes of hundreds of thousands, occupied Baghdad’s Tahrir Square, Sulaymaniyah’s Azadi Square, and public spaces in Mosul and Basra.

Ali Issa’s short book “Against All Odds: Voices of Popular Struggle in Iraq”, a collection of statements, interviews and commentaries, is an essential tool for grasping the significance of this movement.

The protestors militated against the extension of the security agreement with the United States, and against Iranian influence too. “We languish under two occupations, American and Iranian,” says Uday al-Zaidi, an organiser in the Popular Movement to Save Iraq and brother of Muntazar al-Zaidi, famous for throwing his shoe at George W Bush.

And the movement campaigned for due process, for the revocation of the informal sectarian quota system in political institutions, for transparency and accountability, and for a prisoner release.

This was Iraq’s ‘forgotten uprising’. “The near-total lack of media coverage of these struggles,” Ali Issa writes, “is itself part of the dehumanising violence Iraqis face every day.”

The protests re-emerged in 2012. Though the slogans were non-sectarian, and though they won rhetorical support from Muqtada al-Sadr, these demonstrations were largely confined to Sunni-majority areas. Indeed they were sparked by the government’s raid on the home of Sunni defence minister Rafi al-Issawi.

Malki steadily escalated the violence. In April 2013 security forces assaulted a protest camp in Hawija, killing 39. Sectarian battle lines were drawn. Al-Qaida in Iraq – soon to be ISIS – stepped into the limelight, and the rest is war.

It could have happened differently. It still could. Iraqis actually voted against Malki in 2010. Ayad Allawi’s bloc, running on a nationalist ticket and appealing to both Sunni and Shia constituencies, won more votes, but Iran and Obama worked to keep Malki in power.

Last month’s storming of the Iraqi parliament, mainly by Shia supporters of Moqatada al-Sadr, shows once again that Iraqis are eager for change.

And Iraqi popular mobilisation has often proved itself capable of winning important victories. In 2007 it ensured the rejection of the US-supported oil law. In 2010 leather workers struck for 53 days, gaining safety benefits. In May 2011 hundreds of workers at the South Iraq Oil Company in Basra struck against low wages and corruption.

Issa provides access to voices which, because they don’t fit the binary, usually go unheard. Projects such as the Organisation of Women’s Freedom in Iraq, which provides safe houses for victims of family violence as well as Daesh’s rape victims, campaigns against US intervention, runs a newspaper and radio station, and resists the Jaafari Personal Status Law which limits women’s choice in marital matters.

“Against All Odds” indicates a potential alternative to sectarian and ethnic identity politics – one which, given the chance, could blossom. According to trades unionist Falah Alwan, “putting out a societal understanding of unity based on an objective class analysis is a serious political goal.”

“The past has ruined and twisted us,” says Nadia al-Baghdadi of the Save the Tigris and Marshes Campaign. “We are sick, psychologically. What we have seen has made us sick. It is not small what we have gone through.” Yet today, she continues, despite ongoing torments, there are “youth who are energised to act, who have very clear visions and specific goals.”