This review was first published at the New Statesman.

Baghdad, 2005. Occupied Iraq is hurtling into civil war. Gunmen clutch rifles “like farmers with spades” and cars explode seemingly at random. Realism may not be able to do justice to such horror, but this darkly delightful novel by Ahmed Saadawi – by combining humour and a traumatised version of magical realism – certainly begins to.

After his best friend is rent to pieces by a bomb, Hadi, a junk dealer, alcoholic and habitual liar, starts collecting body parts from explosion sites. Next he stitches them together into a composite corpse. Hadi intends to take the resulting “Whatsitsname” to the forensics department – “I made it complete,” he says, “so it wouldn’t be treated as trash” – but, following a storm and a further series of explosions, the creature stands up and runs out into the night.

At the moment of the Whatsitsname’s birth, Hasib, a hotel security guard, is separated from his body by a Sudanese suicide bomber. The elderly Elishva, meanwhile, is importuning a talking portrait of St. George to return her son Daniel, who – though he was lost at war two decades ago – she is convinced is still alive.

In what ensues, some will find their wishes fulfilled. Many will not. After all, the Whatsitsname’s very limbs and organs are crying for revenge. And as each bodily member is satisfied, it drops off, leaving the monster in need of new parts. Vengeance, moreover, is a complex business. Soon it becomes difficult to discern the victims from the criminals.

This loping, murdering, free-floating metaphor for events escaping their intentions, for violence gaining its own momentum, won Ahmed Saadawi (also an acclaimed poet, screenwriter and filmmaker) the 2014 International Prize for Arabic Fiction. Detective story and satire as well as gothic horror, “Frankenstein in Baghdad” provides a tragi-comic take on a society afflicted by fear, and a parable concerning responsibility and justice. 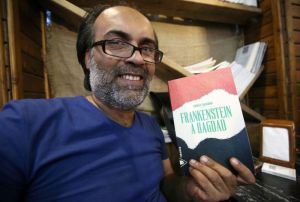 Mahmoud, a harried journalist, and the less intelligent but equally ambitious Brigadier Majid of the Tracking and Pursuit Department, try to chase the creature down. Madmen, religious entrepreneurs, a magician and a ‘Sophist’ follow it, seeking a leader for their various ideologies. Those affected by the Whatsitsname’s actions include a newspaper editor, a migrant worker, a housewife and a real-estate agent. The subplots are sufficiently well developed, and the cast large enough, to form a lively portrait of a teeming, cosmopolitan Baghdad. It’s a city “where no-one could claim to be an original inhabitant,” and which steadily diminishes as its residents either flee or die. In one of the novel’s many sad ironies, the Whatsisname, constructed from diverse “ethnicities, tribes, races and social classes” is declared “the first true Iraqi citizen.”

Jonathan Wright’s superb translation conveys the novel’s contemporary, urban edge, as well as its light and witty style. Saadawi’s brand of horror is self-deprecating, always delivered with wry irony, so there’s nothing old-fashioned in the gothic. Brigadier Majid’s inefficient sleuthing may be assisted by a team of astrologers in conical hats, but they are too embarrassed to appear in public (one of them, as versatile as the times, will later adopt religious dress), and they employ “cell phone vibrations” for their occult communications.

The humour is sometimes laugh-out-loud. When four beggars are found dead, each with his hands round the throat of another “like some weird tableau or theatrical scene”, the Brigadier solemnly declares: “It was meant to send a message.”

The comedy heightens rather than detracts from the sober subject matter. As it unfolds the story ‘explains’ such real-world events as the August 2005 stampede of pilgrims on the Imams Bridge, when almost a thousand were trampled or drowned in the panic caused by the mere rumour of a bomb. This ubiquitous, arbitrary and excessively gratuitous death is the writer’s major theme. If Hadi the monster-maker’s original creative impulse was to restore what was broken, to establish dignity for the dismembered victims of war, this is Saadawi’s concern too. The novel therefore moves as much as it entertains.

Under intense historical pressure, the current wave of Arabic prose fiction is adventurous in both form and content. Saadawi’s fellow Iraqi writers Hassan Blasim, Ali Badr and Muhsin al-Ramli – all fortunately also translated to English – display similar ambition and freedom with genre. This is only to be expected when lived reality is often stranger and more terrible than fiction. In Saadawi’s Baghdad, tales of the Whatsitsname spread like wildfire, and naturally so: “Over the last years the local people had heard many stories that were no more believable.”