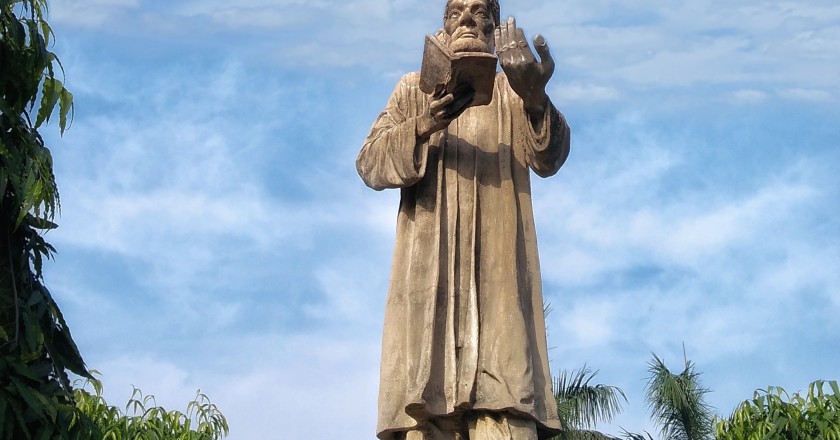 I first encountered Ghalib in the early 1970s. I was in graduate school, studying poetry. Then, as now, I had no Urdu. The medium of transmission—translation—was Aijaz Ahmad’s Ghazals of Ghalib, from Columbia University Press. It comprised versions of ghazals by W.S. Merwin, Adrienne Rich, William Stafford, Mark Strand, and others, all of them working from Ahmad’s literal translations and supplementary comments. My interest (probably slaking along the way some ersatz thirst for the supposedly exotic) was more in the American poets I admired than in the original poems they tried to bring into English. Merwin, Rich, and the rest were driven to Ghalib, or so I thought, by their quest for alternative models to the high modernist masters they were trying to shed or shred, by their search for remoter precedents to replace nearer ones they needed to reject. 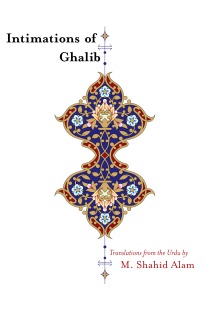 The ghazal is united by form (two-line units, rigorous patterns of rhyme and refrain) but discontinuous in theme (each two-line stanza is distinct and separable from its fellows). The ghazal is also oral and performative, even in some ways interactive. And, however much it is steeped in tradition, at least in Ghalib’s hands, it feels intensely personal. This must have seemed an antidote to imaginations trained on, then sick of the thematic and other unities of British and American poems, of the primacy of print, and of the then still thunderous man-date to write impersonally that had begun as a revolt and become an orthodoxy. There’s irony in this: the ghazal belongs to a master-apprentice tradition bound not only to technical rigor but also to stern commitments to inherited and formulaic sets of images, characters, and motifs. But it’s an irony lightened by the ghazal’s roots in oral performance and by the at least apparent likeness of its discontinuities to the surrealist, deep image, and other, often foreign styles American poets in those days were trying out and trying on. At a time of cultural upheaval, when America’s inherited colonial war in Vietnam was being prosecuted and protested, Ghalib’s particular circumstances might have resonated, too. He was an impecunious aristocrat in a still only nascently nationalist India; he lived at the tag end of a dying Mughal dynasty increasingly beholden to British colonial rulers who were capable of monstrous reprisals to repress and punish rebellion; he could seem to have made a separate peace. A faithful but non-sectarian Muslim, Ghalib was also wittily, irascibly irreverent and more in tune with ecstatic Sufi sensuality than more conservative Islamic asceticism, as much given to the pleasures of love affairs and wine as to those of the strictest poetic craft. Even Ghalib’s more than Keatsian precocity—many of his finest poems were written by the time he was 19—might have seemed a recommendation in those youth-besotted days.

However all of that may be, the poems Stafford, Strand, and others made from Ahmad’s versions were refreshing, part of a burgeoning culture of alternative inspirations and excitements. How much they conveyed of Ghalib is another matter. (Thirty years later, Robert Bly, another American poet of the Rich and Merwin generation, had his own, more thoroughgoing try, working once more from literal translations, this time done by Sunil Dutta.)

Meanwhile, my awareness of Ghalib lay dormant. Then, several years ago, I received a note from a university colleague I didn’t know (Shahid Alam, a professor of Economics). He asked, with unusual courtesy, if I’d look at some verse translations he’d been working on. I said I would. I’m very glad I did. Those poems initiated a valued friendship, and proved to be among the splendid versions of Ghalib’s ghazals in English collected in this book. Of course I can’t properly estimate the fidelity of Alam’s translations to their Persian inflected Urdu sources, any more than I could that of the earlier ones I’ve mentioned, but I know Shahid Alam is fluent in Urdu and has made very good poems in English. I’m also sure that his versions carry over into English unusually many of the formal properties that give the ghazal its particular excellence, character, value, and flavor: not only the disruptive thematic disunity and soothingly constant formulaic repertoire already mentioned (and the combined tension and release that pairing produces) but also its wealth of rhyme and refrain, its seriousness and wit, and its typically dramatic first and self-referential final distich. Most of the biographical and technical information necessary to appreciate the poems is given in the translator’s introduction. It remains for me to point out a few of these poems’ manifold successes.

In contrast with English, Urdu is a highly abstract, multivalent, and richly suggestive language (whatever English’s connotative resources, alongside Urdu it can seem narrowly concrete and specific). One way Alam represents those qualities of Ghalib’s originals is by offering multiple versions of particular poems, usually two, once as many as five, a device that helps convey Urdu’s and the poems’ great range of expressive and interpretative potential. For instance, two versions of the same ghazal (here numbered 24.1 and 24.2) variously mock, rage against, and humbly accept divine control of human life and death.

Ghazals are by definition love poems. They address loved ones both secular and sacred, and they consider persons, events, situations, and feelings of every conceivable type and kind: the beloved may be coy, disdainful, or yielding; love may be requited, refused, or ignored; love might persist or go stale, or—in ecstasy or departure—take flight; lovers in ghazals can experience joy, contentment, satiety, boredom, indifference, anger, despair, or hate, sometimes several of them all at once. And because Urdu pronouns don’t distinguish gender or sepa-rate the human from the divine, other possibilities ramify. All of this gives Ghalib’s verse, to borrow English literary terms, Petrarchan, mock-Petrarchan, and Metaphysical qualities. Love is infinitely intense, a tempest or shower of arrows; yet love’s “grand gestures” can be ridiculed, ridiculous. Meanwhile, this superb and superbly rendered pair of lines matches anything in Donne:

Shaped for eternity: yet tied to time’s cross.

What did he think whose hand crafted us?

As the opening lines of the poem numbered 35.4, this passage also captures the dramatic quality characteristic of a ghazal’s initial stanza: here, the tension generated when statement confronts interrogation, when the meanings embedded in the word “think” shift and multiply, when the vowel sounds in “cross” and “us” diversify and echo. Alam is a master of assonance. He uses it, as well as more straight-forward rhyme and repetition, to convey in English a good deal—if, inevitably, far from all—of the formal patterning ghazals entail. As mentioned, refrains are required. In poem 30 the word “free” is re-peated at the end of every other line, and in such a way as to deploy many of the myriad shades of meaning that vital word contains; among other things, the device reminds us that freedom within constraint is the hallmark of successful formal verse. Other sorts of excellence abound. Here is an instance of Ghalib’s masterfully discreet yet explicit sensuality, master-fully conveyed:

All day, the Seven Sisters stay veiled, out of sight.

What is it that makes them bare it all by night?

And here, from the same poem (2.1) is a potent pun: “Beyond creeds and rites we worship God alone.” The final word indicates independence and loneliness both; it can apply, in grandeur and desolation, to both worshipper and worshipped.

Alam captures well Ghalib’s aristocratic hauteur and often self-deprecating humor, his comic mixtures of lofty and demotic diction, and his quick shifts of mood and tone: when Alam writes “I have laughed at my lows. / Now nothing lifts me,” the incomplete chiastic structure communicates the drastic, stomach-churning drop from confident boast to hollow despair (and perhaps as well the tears that would complete the low-high, laughing-crying chiastic cross). Alam is equally adept at finding equivalents for Ghalib’s often densely ideational imagery, as in these intellectually teasing lines on containment’s capacity to be both a claustrophobic trap and a liberatingly vast expanse:

Inside the heart, love carps it lacks space.

Inside a pearl, the raging sea is free.

But recant when lightning finds me out.

The translator’s play with the like and unlike sounds of “crazed” and “craving,” the similar but divergent images of fire and lightning, and the related and opposed ideas of worship and recanting is an ongoing revelation. Finally, as an English-language reader, I much enjoy the way these poems combine formal unity with thematic disunity to build and maintain or resolve the tension between sameness and difference that is one of art’s enduring pleasures. Perhaps that’s a projection of alien expectations on these marvelous poems. Translation loses things, and readers from outside a writer’s culture lose a great deal more. But translators help us recover some of what we’ve lost or otherwise could never have at all. I’m thankful to Shahid Alam for bringing so much of Ghalib‘s world and the world of the ghazal to the English page. I think other readers will be grateful, too.