The images have become commonplace.  Pick-up trucks laden with rocket launchers and machine guns.  Dusty men with their rifles, poised as so many Rambo’s.  Billows of smoke that linger after the bomber has flown on to its next target.  These are the images of contemporary conflict.  Differences of socio-political opinion are settled by bloody confrontation.

True, violent conflict is as old as mankind itself.  True, self-defence is a necessity, even a responsibility.  But the business of war has become the norm rather than the exception.  The significance of this development lies not merely in the multitude of violent and unnecessary deaths—but more so in our readily viewing this reality with a novel brand of bold nonchalance.

In business-speak for international arms dealing, DSEi—Defence & Security Equipment International—boasts that its biennial exhibition ‘provides a time-effective opportunity to meet the whole defence and security supply chain’.  DSEi further promises that this year’s event will exceed attendance figures from 2009: 25,170 attendees; 1280 exhibitors; 98 countries; 70 official delegations; 27 national pavilions.   Just have a look at its slick website offering ‘infinite opportunities’ to those who would jump on the weapons carousel.

While we would all wish to see a world in which no nation has any need of equipment for defence or peacekeeping, it is not the world we live in now.

END_OF_DOCUMENT_TOKEN_TO_BE_REPLACED 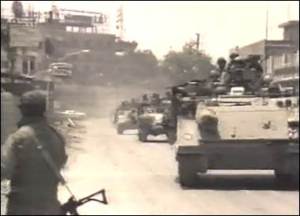 The turmoil that has beleaguered the Middle East for decades has been described many ways.  On the 5th of June, however, the terminology turned vulgar.  This enduring conflict was publically characterised as a ‘war between the civilized man and the savage’.  Boldly announced with a plea to ‘support Israel/defeat Jihad’, the full page advertisement ran in the New York Post’s special section covering the city’s ‘Celebrate Israel’ parade.

Declaring the Muslim people ‘savage’ is, of course, just a school-yard taunt from Islamaphobe Pamela Geller, who gleefully takes credit for the advertisement.  Had her rant been limited to her own blog, we might easily dismiss it.  The problem lies in its acceptance into mainstream discourse.  The Post may be tabloid journalism, but its paper edition remains the seventh most popular paper in America.  And this sort of crude advertisement for a political cause panders to a public comfortable with the mind-set of ‘don’t bore me with the details’.

But the details are critical if we are to consider a conflict that has taken thousands of lives.  How can we, for instance, reconcile the concept of ‘civilized’ with the reality of shooting unarmed protesters?  The advertisement asks us to accept Israel as ‘civilized’; yet as these very words were first read, Israeli soldiers were shooting into a crowd of Syrian-Palestinians, killing 24 and injuring another 350.

END_OF_DOCUMENT_TOKEN_TO_BE_REPLACED 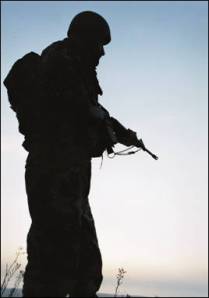 The arms of the Resistance, it has been suggested, should be abandoned as a matter of principle.  ‘From now on’, explains Caretaker Prime Minister Saad Hariri, ‘the possession of weapons, decision of war and peace, and defending the country should only be under the state’s control’.  Political principles, it would seem, can be slippery.  ‘From now on’?  Perhaps this disclaimer is meant to ease the turnabout from the Hariri-Ministerial Cabinet Statement issued just over a year ago:

Based on the Cabinet’s responsibility to preserve Lebanon’s sovereignty, its independence, unity and the safety of its land, the government underscores Lebanon’s right through its people, army and resistance to liberate or regain authority of Shebaa Farms, Kfarshouba hills and the occupied part of Ghajar village and defend the country against any aggression’.

For the sake of argument, however, let us set aside the dictates of political expediency.  Let us look at the reality of what this stance entails.

END_OF_DOCUMENT_TOKEN_TO_BE_REPLACED

‘With me you have a prime minister whose belief in Israel is indestructible’, David Cameron assured over a thousand supporters of a private security organisation that polices the English Jewish communities.  While his commitment has long been common knowledge, his word choice underscores the need for concern.

When we say we ‘believe in’ something, we are making a personal value judgement.  Whether we ‘believe in’ God, or we ‘believe in’ drinking five litres of water a day, the phrase means that we think the concept is valid.  The British Prime Minister’s word choice points to a political phenomenon: Israel has never been a traditional state as much as it has been an ethos.  From the beginning, the Israeli project has been an ideology imposed at the expense of those whose only fault was to have been caught unawares on a coveted land.

Indeed the whole of Cameron’s speech, which can be read here, exudes a passion for a conceptual people under siege.  Cameron thus describes his belief in the Israeli project as ‘indestructible’—defensively and defiantly ‘indestructible’.

END_OF_DOCUMENT_TOKEN_TO_BE_REPLACED

Anniversaries measure time. In one respect, they are an artificial concept. We decide, for instance, that twenty-five years of marriage should be celebrated, but we ignore the subsequent days as merely marking the path to twenty-six years. And reaching twenty-six years, though obviously a greater length of marriage, will not be celebrated with the same gusto as the twenty-fifth anniversary that boasts pre-printed greeting cards and foil balloons.

As the contrivance of marking anniversaries in many ways defies common sense, we might ask ourselves why we do it. Perhaps it is because the infinite, amorphous magnitude of time must be taken in bite-size pieces. It would otherwise be overwhelming. When we stop the passage of time—no matter how arbitrarily, no matter how superficially—then we are in effect looking for significance in what we accomplish with our lives.

On the 25th of May 2010, we observe the ten-year anniversary of the Lebanese Resistance and Liberation Day. A full decade has passed since the victory that baffled the Western world. A twenty-two year military occupation was virtually uprooted and expelled. The balance of global power was unhinged.

END_OF_DOCUMENT_TOKEN_TO_BE_REPLACED

The Samouni family of Palestine lost 29 members of its extended family in Israel’s December massacre against the defenceless population in Gaza. Brenda Heard, founder of Friends of Lebanon, reveals how the goodwill of the Samouni family and assumption of continued cordiality with Israelis was repaid: in their family’s blood. The Samouni’s naive neighbourliness in the service of self-preservation was repaid with most of their extended family mercilessly wiped out by the occupying apartheid regime. This was not collaboration but a misguided attempt to co-exist under conditions of occupation and siege. The genocidal contempt towards genuine peace and all Palestinians is on display in a microcosm here as the UNHRC passes the Goldstone Report.

END_OF_DOCUMENT_TOKEN_TO_BE_REPLACED

A guest op-ed from Brenda Heard of Friends of Lebanon.

On Sunday 14 June 2009, hours before Israeli Prime Minister Benjamin Netanyahu delivered a statement announcing his expectations of the international community, Israeli F-16 jets dropped several bombs along the southern Gaza border.  The Israeli military said it was targeting underground tunnels.  Four Palestinians were wounded. (More on the exchange of hostilities here and here.)

As the Palestinians were being treated in hospital, Netanyahu proclaimed, “Peace has always been our people’s most ardent desire.”  In fact the speech was interwoven with Hallmark-Greeting-Card-messages of tranquil harmony.  “If we join hands and work together for peace. . . .”

Cut the violins.  In essence, Netanyahu stated that he expected the international community to support his desire to turn his holy land into his Disney land so as to regain the tourist trade needed to bolster an ailing Israeli economy.  We could make this whole Palestinian problem go away, he said, if we simply ignore those we forced out and bend those remaining into complete submission.  Lest anyone get the wrong idea, though, we’ll let them keep a flag and a song.  Just to prove how civilised we are.