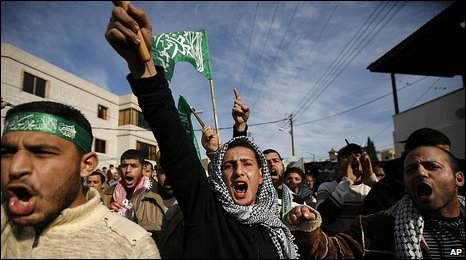 Alistair Crooke, of the Conflicts Forum, has written three articles over the course of the ongoing massacre in Gaza, the best of which, Why the Gaza Calm Crashed, is included below. In it Crooke explains, more clearly than any other commentator, how the Israeli cease-fire was really designed to illegally collectively punish the Gazan people until they rejected, their democratically elected leadership, Hamas.

When Israel therefore offered a renewal of this “cease-fire” agreement, rejecting Hamas’ terms for lifting the blockade on the people of Gaza, Hamas had a difficult choice: continue a brutal siege collectively punishing 1.5 million Gazans, designed to oust Hamas themselves from power, or reject it. Cooke paints a nuanced and bleak picture of, US backed, Israeli aggression or what others call the “cease-fire.”

It’s worth noting that the world view, mentioned by Crooke, of “moderates” versus “extremists” is championed and promoted in the West by the Neocon Israel firsters and is designed to best serve Israel’s interests in the region.  You have to be pro-Israel, or exceptionally ignorant, or like Blair, possess both these qualities, to see the country as “moderate” in the first place.

Many have asked in the wake of Israel’s attack on Gaza, how Hamas, if it saw the consequences of ending the ceasefire — and Hamas did foresee the likelihood of disproportionate Israeli military action — nonetheless could have acquiesced to the inevitable bloodshed — bloodshed that an Israeli army, fixated on restoring its deterrence after its failed 2006 war with Hesballah, would visit on the citizens of Gaza. Some may read into this decision the cynicism of a movement that prioritises resistance; but to do so would be to misread how Hamas analyses their situation and understands the nature of resistance.

END_OF_DOCUMENT_TOKEN_TO_BE_REPLACED

According to Foreign Minister Tzipi Livni the IDF offensive has been “serving the interest of the Palestinian people” but, as the Haaretz makes clear, it no longer serves Israel’s interests as defence officials back an immediate Gaza cease-fire. The military establishment has concluded that escalating the conflict by launching phase three would be unwise. They feel that Israel “achieved several days ago all that it possibly could in Gaza” and are even prepared to withdraw before they have a UN force on the Egyptian border (to block the smuggling of basic food and medicines among other things – infuriating when your trying to starve a defenceless population into submission).

One might ask, what have they achieved? They have committed, according to the UN President of the General Assembly, acts of genocide against the Palestinian people and have yet failed in their goals of eliminating Hamas, stopping the rockets, or even blocking the Palestinain supply route through Egypt.

In short, Israel’s attempt to militarily dominate the Palestinian people has been a complete failure. Will the massacre of Palestinians have helped Kadima and Labour defeat Likud in the election?  I have a sick feeling it will.  I’ve heard of blood for oil, now Israel has brought us blood for votes.