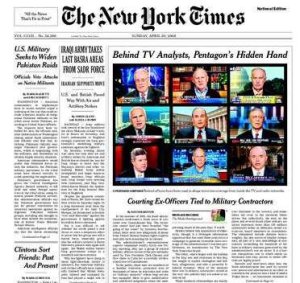 Fairness and Accuracy in Reporting (FAIR) has an action alert on the New York Times‘ Pentagon Propaganda, detailing its misleading report on Guantánamo and terrorism. This comes as the same paper last year published David Barstow’s revelations about the Pentagon’s hidden hand in “news” coverage to generate pro-war propaganda and favourable coverage for the Bush administration, for which he has won a Pulitzer Prize for investigative reporting. (See also this interview on Democracy Now earlier this month). The NYT continues to try to have it both ways: (selectively) exposing propaganda as well as exercising it as an extension of the US military and political establishment. FAIR does well to keep the scrutiny turned right up:

While former Vice President Dick Cheney has been front and center in the media debate over the current White House’s national security policies, he’s not the only one trying to challenge the White House’s message. The New York Times published a front-page article (5/21/09) that bolstered the notion that former Guantánamo prisoners “return” to terrorist activity.

The remarkably credulous Times story, under the headline “1 in 7 Freed Detainees Rejoins Fight, Report Finds,” was based on a Pentagon report leaked to the paper before its release yesterday evening. The article emphasized the notion that former prisoners “returned to terrorism or militant activity”–without adequately explaining the definition of either term, or examining whether those former detainees were ever “terrorists” in the first place.