An Open Letter to Illinois Senator Mark Kirk
responding to his call for U.S. Special Forces to attack a flotilla of ships that will sail to Gaza 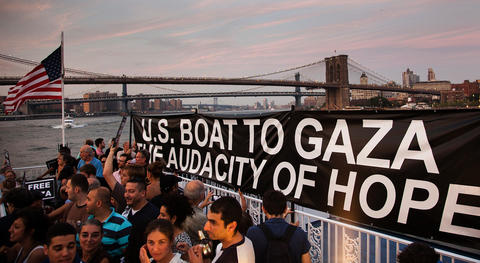 We are Illinois residents writing to you from Athens, Greece. Just before leaving the United States, we wrote to inform your office about our intent to sail on “The Audacity of Hope,” as part of the US Boat to Gaza project.  In our letters, we explained why we were traveling to Gaza.  We told you of our previous experiences living among Palestinians who lack access to basic necessities, such as clean water, because of the blockade. Referring to Gaza as the world’s largest open-air prison, we mentioned how hard it has been for people to rebuild after previous lethal assaults, especially the Operation Cast Lead attack which ended, after 23 days, on January 18, 2009.  According to B’tselem, the foremost Israeli Human Rights Organization, Operation Cast Lead caused the deaths of 1,389 Palestinians in Gaza.  Of those, 344 were children. Of the 13 Israelis who were killed, four were soldiers killed by friendly fire.

Knowing that you and your staff care deeply about the consequences of unemployment, poor education and dangerously limited health care delivery, we pointed out related statistics affecting people in Gaza where 45% of the population is unemployed and hospital administrators are sounding the alarm because they are running out of crucial medicines.  Half of Gaza’s 1.6 million people are under age 18.

END_OF_DOCUMENT_TOKEN_TO_BE_REPLACED

The United States government has criminalised the Palestinian people, and now it is increasingly treating US citizens who stand in solidarity with Palestine as criminals as well – including those courageously putting their lives on the line to break the siege on Gaza.

I am a Palestine solidarity activist in the US, and one of 23 US citizens who have been issued with a subpoena to appear before a federal grand jury as part of what the government has said is an investigation into violations of the laws banning material support to foreign “terrorist organisations”.

None of us have given money or weapons to any group on the State Department’s foreign terrorist organisation list. But what many of us have done is participate in or help organise educational trips to meet with Palestinians and Colombians resisting the US-funded military regimes they live under.”

Murphy goes on to discuss the process of criminalisation as well as the green light U.S. Secretary of State Hillary Clinton has given to Israel to attack the Second Gaza Freedom Flotilla. Click here to read the piece in its entirety.

Today in the House of Commons Britain’s leading neoconservative organisation the Henry Jackson Society hosts the UK launch of the Friends of Israel Initiative.  This new organisation is the latest of a number of well connected advocacy groups in the UK seeking to deflect criticism of Israel’s illegal occupation and repeated human rights abuses.

The Friends of Israel Initiative says it ‘aims to create a network linking private and public figures who agree with the idea of an Israel fully anchored in the West’.  This network will not have to be built from scratch; rather Friends of Israel will be able to integrate itself into extremist networks already well established in UK politics.

The Friends of Israel Initiative is an international operation and was first launched in Paris on 31 May – the same day that Israeli soldiers boarded the Mavi Marmara in international waters and killed nine activists.  The organisation was reportedly established by Dore Gold, an American born Israeli who heads the Jerusalem Center for Public Affairs and was formerly an adviser to Ariel Sharon and the current Israeli Prime Minister Benjamin Netanyahu.[1]

Gold also has links with UK politicians.  In January 2007 he led an Israeli delegation at a conference at the House of Commons debating possible measures against Iran.[2]  The conference resulted in an Early Day Motion signed by 68 MPs urging ‘the British Government to put forward a resolution at the United Nations Security Council demanding President Ahmadinejad be brought to trial on the charge of incitement to commit genocide’.[3]  The Motion was introduced by the neoconservative MP Michael Gove, a signatory to the Henry Jackson Society’s Statement of Principles and now a Cabinet Minister.

END_OF_DOCUMENT_TOKEN_TO_BE_REPLACED

AlJazeeraEnglish — 14 June 2010 — In the early hours of Monday, May 31, the Israeli navy intercepted a flotilla of boats carrying thousands of tonnes of aid to Gaza. Nine passengers on the Mavi Marmara – the flotilla’s largest boat – were killed. This much we know. In the aftermath of the event, accounts from both sides have diverged wildly. Israel claims that it acted in self-defence against a group of “violent extremists” linked to al-Qaeda and Hamas, intent on breaching the military blockade of Gaza. The activists say they were frightened for their lives after being shot at from helicopters in the dark of night, their raised white flag ignored. They say Israel’s attack on their ship in international waters was unexpected and disproportionate. Examining claim and counter claim, A Vourney of Life and Death includes an exclusive interview with the captain of the Mavi Marmara, those on board the ships and previously unseen footage.

Though you couldn’t tell from the mainstream media, some citizens of Israel spent the past week running from demonstration to demonstration. Not in our name will unarmed civilians be murdered at sea. Not in our name will over a million people (the majority of which are children) be held under a horrifically violent siege. So we screamed our lungs out, and around 10,000 Israelis marched the streets of Tel-Aviv, last saturday. Around the world hundreds of thousands, knowing exactly how their hard-earned tax money is used, hit the streets, carrying the same message: “Not in our names.”

Of Terror Attacks, Lynches and Unprecedented Violence
In Israel, however, you couldn’t guess this is what was going on, because in Israel, like any other successful totalitarian regime, once the state commits an act so heinous that one’s conscience might start hammering in one’s head, the propaganda machine is turned on to full power. Not only were the pro-flotilla demonstrations that took place this week not reported, unless there was a

nationalistic counter action by patriotic zealots, but while on my way, Tuesday morning, to the Ashkelon dock, to make sure the captured boats know that there are people here who support and need them, the radio was blurting out statements the likes of “an attack of unprecedented violence on IDF soldiers.” (from memory)

Later on, at home, between the morning demonstration at the dock and the evening demonstration at the Ministry of Defense, I surfed the news channels. All were showing the following shots (courtesy of the official IDF YouTube channel) in a never-ending loop. In the background, the anchor-people of established authority making deep analyses such as “our soldiers expected peace activists and ended up with a band of street fighters.” (from memory) The word “lynch” titling each and every shot:

END_OF_DOCUMENT_TOKEN_TO_BE_REPLACED

As international outrage spreads at the Israeli elite commando attack on an unarmed humanitarian convey in the middle of the night on international waters, Israel is desperately trying to rebrand the incident as one of self-defence. It is nothing new for Israel, and other aggressing powers, to smear their victims as perpetrators. Afterall, unjustifiable murder is too jarring to stomach.

Yet, Amnesty International released a statement about Israel’s excessive use of force, further stating that Israel’s version of events begs credibility.  Former Archbishop Desmond Tutu proclaimed the actions of Israel as “completely inexcusable”. According to Craig Murray, specialist on maritime law, “To attack a foreign flagged vessel in international waters is illegal.”

Deported activists tell a horrifying story of the use of electric shock, live ammunition, smoke bombs, gas canisters, beatings, and seizure of all evidence on cameras. Greek activist Michalis Grigoropoulos said, “They took us hostage, pointing guns at our heads…There was absolutely nothing we could do.” A Turkish woman, with her 1 year old baby, recalls “The ship turned into a lake of blood.”

Israeli-Arab Knesset member Hanin Zoabi, who was on board, demanded an international inquiry: “It was clear from size of force that boarded ship that purpose was not to stop sail, but to cause largest number of fatalities to prevent future initiatives.” In contradiction of the carefully managed public relations campaign, a top Israeli Navy commander brags to the Jerusalem Post that “We boarded the ship and were attacked as if it was a war.” The names of the 10-19 dead, 60-80 injured, and hundreds detained have yet to be released.

END_OF_DOCUMENT_TOKEN_TO_BE_REPLACED

Naomi Klein, who is on the advisory board of the Free Gaza Movement, speaks out in Toronto. (via MondoWeiss)