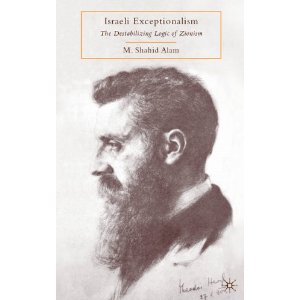 People have been against both the idea and practice of Zionism since its inception.  Zionism is an ideology that has never earned the support of all Jews, and one that has never been accepted by the vast majority of Palestinians, Arabs, and Muslims.  Zionism has likewise failed to achieve significant support in the so-called Third World, and has been almost uniformly rejected by black nationalists inside the United States.  Yet Zionism has been successful insofar as its desire to create a Jewish-majority nation-state has been achieved.  Despite its discursive self-image as a liberation movement, Zionist practice is colonialist and brutally violent.

In his latest book, Israeli Exceptionalism:  The Destabilizing Logic of Zionism (Palgrave Macmillan), M. Shahid Alam explores these paradoxes with great skill and insight.  Israeli Exceptionalism takes its place among a series of recent books that question the logic of Zionism.  Most of these books argue in favor of a one-state solution to the Israel-Palestine conflict; inherent in that argument is a rejection of Zionism.  Alam takes a slightly different approach in his rejection of Zionism, one that is global in scope.  He points out that “[a]s an exclusionary settler colony, Israel does not stand alone in the history of European expansion overseas, but it is the only one of its kind in the twentieth and twenty-first centuries” (14).  Israel, in other words, is an anomaly:  a settler colonial society still in thrall of the ideologies and racism of the nineteenth century.  As with the European colonization of North America, Zionism conceptualizes itself as an exceptional force of good in history.

END_OF_DOCUMENT_TOKEN_TO_BE_REPLACED 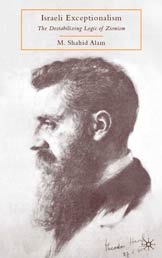 For those unfamiliar with the extraordinary evolution of Israeli exceptionalism emanating from its Zionist narrative and assuring Israel’s incredible success as a colonial settler state, M. Shahid Alam’s book is the one to read.  He has recorded a compelling, uniquely comprehensive and enlightening historical analysis of the inherently destabilizing dynamic of Zionism.  Of particular note are his detailed Chapters Nine and Thirteen.

In Chapter Nine, he documents the constellation of Jewish factors that came together in the 19th century which assured Zionist success: the spread of Jewish intellectuals and professionals across major cities in Europe; Jewish population growth to 16.7 million in 1939 which could root a nationalist movement; business acumen and ownership of major banks and a strong media presence; growth of interchange with other Jewish leaders contributing to a sense of community – important considering that Jews had not previously formed a sense of nation according to Alam; and as European nationalism grew, Jews were affected by the idea though they had no majority presence in any one state which could be claimed by them.  Historical anti-Semitism prodded the Jewish elites toward formulation of the Zionist project even as Jews were moving out of the ghettos of a liberalized Europe.  Given their distribution throughout Europe and without a territorial base of their own, the Zionist sought and captured the needed “mother” country to implement their colonial settler state in Palestine.  This they found in the U.K initially and then in the U.S. with periodic support by other countries such as France.

END_OF_DOCUMENT_TOKEN_TO_BE_REPLACED

Dr. Shahid Alam is primarily an economist and an educator.  But, he is also a public intellectual, and often a lively polemicist, who writes with insight and conviction on issues dealing with culture, identity, religion, globalization, imperialism, and terrorism.  But nothing stirs his passions as intensely as the issue of the Palestinians – their dispossession, marginalization, despair.  His feelings are ardent, his language combative, his intellectual engagement prickly and zealous.  It is largely this pre-occupation that has earned him a place in David Horowitz’s book on the Hundred Most Dangerous Academics in the US (an ignominy that he probably wears as a badge of honor).  His latest book distills, clarifies and deepens much of his previous thinking on Zionism, the creation of the state of Israel, and the injustices inflicted on the Palestinians.

The trope along which this book is organized is the concept of “Exceptionalism” that is often claimed by the state of Israel, and sometimes by Jews themselves.  To Alam this is nothing other than a rhetorical device, and a moral posture, to ensure the West’s indulgence and support, to protect Israelis from any criticism, and exempt them from standards and behavioral norms that apply to other peoples.  This “exceptionalism” is derived from their Biblical covenants and the belief in their inherent “chosen-ness”, their wrenching history of suffering and persecution, their considerable achievements in science, philosophy and philanthropy, and their current status as a people allegedly besieged by Islamic fundamentalists, anti-Semitic bigots, and the barbaric and self-destructive Arabs.  To question anything about Israel is tantamount to denigrating every aspect of its special status.