This article appeared at Upside Down World.

With a little more than a year until the 2012 elections, the White House and Congressional leadership are anxious to pass pending Free Trade Agreements (FTA) as soon as possible.

Most worrisome of all is the pending FTA between the US and Colombia. Corporate leaders and US and Colombian government officials with their public relations operatives are peddling lie after lie to justify passage.

The following guide put together by The Alliance for Global Justice will help people to better understand and counter the falsehoods they will be hearing in the coming weeks.

CLAIM: Passing the FTA will put the US in a better position to pressure Colombia to improve its labor and human rights record.

REALITY: US intervention in Colombia has caused more problems than it has helped and the FTA would only make things worse. Recent investigations by the Colombian Attorney General have uncovered extensive US involvement regarding domestic spying by former President Álvaro Uribe’s administration. Information was shared with and analyzed by embassy staff and domestic spying programs were funded by the CIA. Activities included gaining access to the bank accounts, following the families and bugging the offices of Colombian magistrates.

Targets also included labor leaders. According to an August 20, 2011 Washington Post article: “Another unit that operated for eight months in 2005, the Group to Analyze Terrorist Organization Media, assembled dossiers on labor leaders, broke into their offices and videotaped union activists. The United States provided equipment and tens of thousands of dollars, according to an internal DAS report, and the unit’s members regularly met with an embassy official they remembered as ‘Chris Sullivan.'”

END_OF_DOCUMENT_TOKEN_TO_BE_REPLACED

This article first appeared in The Indypendent.

Cocaine, the drug fueling the trade that’s left thousands dead in Mexico and Central America since 2007 and which 1.4 million Americans are addicted to, originates with two species of the coca plant grown in the South American Andes. Ninety percent of the U.S. market for cocaine is fed by Colombia, with the rest largely provided by Peru and Bolivia.

An estimated 310 to 350 tons of refined cocaine were trafficked out of Colombia last year, enough to make a rail of nose candy that would encircle the earth twice. Along with exporting cocaine northward, Colombia has become a laboratory for failed drug war policies that are finding their way to Central America and Mexico.

In July 2000 President Bill Clinton signed Plan Colombia (see note following article for more information) into law, initiating the anti-drug-producing and trafficking operation that has cost U.S. taxpayers more than $7.3 billion to date. U.S. military bases have been established in Colombia under the plan, as have extensive air patrols, pesticide spraying and surveillance. Because of the violence, some 2.5 million Colombians have been displaced.

“The lessons of Colombia are being ignored in many ways. You’ll have mainstream analysts saying Colombia is the model to win the drug war. If Colombia is winning then what are the Colombians trafficking?” drug war expert Sanho Tree, a fellow of the Institute for Policy Studies in Washington, D.C., told The Indypendent.

END_OF_DOCUMENT_TOKEN_TO_BE_REPLACED 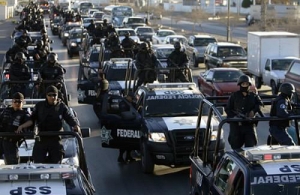 In another misstep of the historic failure of Plan Colombia and the U.S.-supported War on Drugs, Colombia is training thousands of Mexican soldiers, police and court officials in an effort to boost Mexico’s fight against drug cartels.

Trainings have mostly taken place in Mexico, but now Mexican troops and police are traveling to Colombia to receive training from “Colombia’s battle-tested police commandos,” The Washington Post reported on Saturday. The article also suggests that, in addition to asserting itself as a regional power, Colombia is acting as a proxy for Washington because increased U.S. military presence in Mexico is not politically viable.

White House Drug Policy Director Richard Gil Kerlikowske, while meeting with Colombia’s President Juan Manuel Santos Calderón in Bogotá on January 18, said that Colombia “serves as a beacon of hope for other nations struggling with the threat to democracy posed by drug trafficking and related crime.”

A Beacon of Hope?

Kerlikowske’s deceptively rosy assessment of Colombia and the effectiveness of Plan Colombia is severely undermined by the facts on the ground.