If the Irish vote to ratify the Lisbon Treaty, Tony Blair, former British prime minister and current lecturer on faith, peace, and Palestinian submission, is expected to become the European Union’s first president. I wrote the following hymn to Blair in October 2007, when the unpleasant prospect of his presidency was first raised. 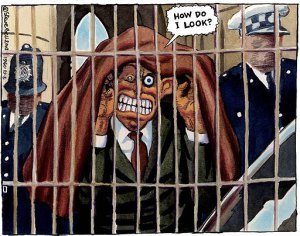 I’ve often thought that Abu Hamza al-Masri, the ex-imam of Finsbury Park mosque, must have been designed in a CIA laboratory. Not only did he – before his imprisonment – fulminate in a shower of spittle against various brands of kuffar, he also had an eye patch and a hook for a hand. You can’t imagine a more photogenic Islamist villain.

If my supposition is correct, then Tony Blair may well have been invented by the Iranian secret service, for of all the neo-cons he’s the one who most looks the part. I refer to the physiognomic combination of weakness and fury, the slight chin wobbling beneath that eye with its wild glint of certainty – the staring left eye, fixed on something the rest of us can’t see, something that makes reality irrelevant – and the teeth both fierce and mouselike, and the shininess of both forehead and suit. Most politicians wear suits, but few suits declare ‘hollow salesman’ so much as Blair’s. The voice too – the hurried speech and breathy tones of a public schoolboy approaching orgasm – that repulsive aural mix of complacency, stubbornness and privilege.

I remember with embarrassment my euphoria when he became prime minister in 1997. I watched the election results roll in with a group of Britons in Damascus. A bottle of champagne was opened, not so much to annoint Blair as to celebrate the passing of the Tories. In any case, I soon regretted as naivety my assumption that British politics had improved. I admit that I didn’t live in Britain for any of the Blair years and so may have missed the benefits of his rule. It is true that he presided over a period of British history in which the wild consumerism of the 80s was tempered by more responsible social policies, and in which the economy grew steadily. How much of this was down to Blair and his crew and how much to wider economic trends is debatable. It is true that whenever I visited London I found it increasingly prosperous and increasingly culturally buoyant (and also increasingly expensive). It is also true that Blair oversaw a successful peace process in Northern Ireland, although the process was started by John Major and succeeded because of the commitment of Mo Mowlam and the compromises of Northern Irish players.

Where Blair went astronomically, criminally wrong was in his foreign policy, and this poisoned domestic policy too. The Iraq invasion led directly to a new terrorism crisis to replace the IRA threat (there are other causes – inner city identity politics gone wrong, the racial and economic alienation of some Muslim communities, Wahhabi penetration of some mosques – but the unwarranted attack on Iraq is the major cause). The terrorism crisis led to a dramatic rise in Islamophobia, a trend which was encouraged by Blair and his friends (like Jack Straw) to deflect attention away from their crimes in Muslim countries. The resulting tension is a shame, to say the least. It had seemed, before 2003, that Britain was solving its racial problems to a large extent. London was markedly less racist and ghettoised than, for instance, Paris. Blair’s people, the media and the war have finished that. And in the new climate Blair’s people revealed themselves more often as neo-con thugs. Ex-Trotskyist John Reid, for instance, called for the Geneva Conventions to be rewritten so that Western militaries would not be hindered in their noble work in the third world. The Conventions were written in the aftermath of the Second World War, after all, when the world was a quainter place, when our enemies were benign Nazis who were only occasionally naughty with their death camps and slave labour programmes, with their scorched earth operations wiping out tens of millions of Slavs. These days we face Islamofascism, an altogether less moral enemy.

Such idiocy arises from the alliance with the empire. Of course, the alliance with America predates Blair. I was once, in the Major years, invited to a party at the British embassy in Damascus. I went along prepared for a fight, and verbally attacked the first diplomat I could find. After a few minutes of ranting I stopped, bewildered because the diplomat was nodding in assent. “You’re meant to be disagreeing,” I told him. “You represent British policy in the Middle East.” He replied that he personally agreed with almost everything I was saying, and that most of his colleagues would too, but that they had been told in London before they started their mission that Britain has no policy in the Middle East except to do what America asks it to do. I don’t think the average Briton would be pleased to hear this.

Britain and America are linked by language, culture and history, especially by imperial history. There is a sense in some quarters that the British Empire never really disappeared, just that its capital moved from London to Washington. And there are more practical reasons for British loyalty. After the Second World War Britain was bankrupt and dependent on American loans, which were not paid off until 2006. As well as the financial debt there may be others, with regard to Britain’s unnecessary nuclear weapons, or Northern Ireland (Britain suffered surprisingly little pressure from America on this issue, especially when you consider how many well-placed Irish-American supporters of Irish republicanism there were). Margaret Thatcher made the flawed but comprehensible argument that Europe had brought two world wars to Britain while America had twice rescued the country. America kept quiet when Thatcher pursued her squalid war in the Falklands, and she allowed American planes from British bases to bomb Libya. But Blair took the special relationship further than ever before, and it was Blair who crystallised and personified Britain’s poodle image: lightweight, tongue out, salivating. Before Blair Britain was not much liked in the Middle East, but it was respected. Over the last decade I’ve seen all Middle Eastern respect for Britain dissolve.

I spent the first two months of the Iraq invasion in Britain, having been evacuated from my teaching job at the British Council in Riyadh, Saudi Arabia. This was fortuitous because it allowed me to see my English grandfather at the end of his life. The night the invasion began he stopped sleeping, and didn’t sleep again until he died. He had always slept well, and I asked him why not tonight. His answer was: “I could hear the angels weeping for the British people.” I asked why, and he replied, “It’s the first time in my life we’ve attacked a country for absolutely no reason at all.” I didn’t argue, but I thought at first he was wrong. His life had lasted for 94 years after all, in which time there had been Suez, and the Falklands, and the 91 Gulf War. But I later saw what he meant. In all those conflicts, however wrong the decision to go to war, there was some potential reward for some small section of British society, or some aspect of legality to be upheld, or some question of credibility or reputation. The invasion of Iraq, however, potentially benefitted only American corporations and the state of Israel. Apart perhaps from a few companies of mercenaries, Britain and the British could only lose.

Blair’s case for war was based on lies. When the lies were exposed he shifted his discourse to one of human rights and democracy, and kept it there even as the Abu Ghraib scandal broke and Iraq descended into civil war and gang rule. At no point did Blair apologise or express regret. With a peculiarly American-imperial arrogance, he let us know that God would be his judge, and that God would judge kindly. This tendency towards religiously-sanctioned violence is one way in which he brought British politics closer than ever before to the American model. Another was his appointment of an unelected Zionist lobbyist as envoy to the Middle East – businessman Lord Levy.

Blair revealed himself as an unredeemable hypocrite during his visit to Gaza in November 2001. A planned demonstration outside to mourn the anniversary of the Balfour Declaration was banned. Rather than apologise for Balfour, Blair lectured his occupied Palestinian audience on the immorality of political violence. No cause, however just you think it is, justifies killing. That’s what he told the untermenschen, and at the very same moment British planes were dropping bombs on Afghan peasants. Blair betrayed no sense of irony whatsoever.

When he resigned as prime minister Blair became the Quartet’s ‘special envoy to the peace process.’ The Quartet, lest we forget, is the joke pretending to be ‘the international community,’ and includes the US, the EU, the UN, and Russia. Anyway, it was only the US that wanted the poodle to play this role. And the ‘peace process,’ lest we forget, is the process by which the Palestinians are encouraged to peacefully accept the loss of what remains of their land and their rights. Blair now claims to be ‘shocked’ by conditions on the West Bank. In order to improve them he has expressed further understanding of Israeli security concerns. In order to help the Palestinians build democratic institutions so that one day they may deserve a little more bread, he has refused to meet the democratically-elected representatives of the Palestinians.

A couple of weeks ago Blair gave a speech in New York on the “deadly ideology” of Islamism. He said: “This ideology now has a state, Iran, that is prepared to back and finance terror in the pursuit of destabilising countries whose people wish to live in peace.” So even out of office, Blair plays the role of backing Bush’s war plans. And the hypocrisy continues to balloon. Which countries does Iran seek to destabilise? Perhaps Iraq, destabilised by the brutal Anglo-American invasion, and by pro-Western Saudi Arabia’s support for Wahhabi groups. Perhaps Palestine, totally destroyed by Zionism. Perhaps Lebanon, where Iran’s ally Hizbullah is the most deeply-rooted political organisation. Britain’s political and military support for the Israeli assault on Lebanon in 2006 was blatant, as Blair worked with the US to scupper ceasefires – until Israel began to beg for one. Indeed, people in all of these countries wish to live in peace, which is why many of them would like more Iranian involvement and less from Blair.

Now there is talk of appointing Blair to the newly-invented post of president of the EU. Do Europeans want to be represented by someone who has failed so much, someone who is so very ugly, with so much blood on his hands?

One thought on “President Blair”