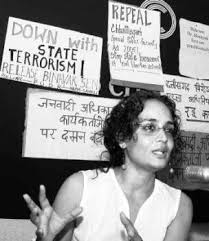 So the task of punishing me for my views seems to have been taken on by right wing storm troopers. The Bajrang Dal and the RSS have openly announced that they are going to “fix” me with all the means at their disposal including filing cases against me all over the country. The whole country has seen what they are capable of doing, the extent to which they are capable of going. So, while the Government is showing a degree of maturity, are sections of the media and the infrastructure of democracy being rented out to those who believe in mob justice? I can understand that the BJP’s Mahila Morcha is using me to distract attention from the senior RSS activist Indresh Kumar who has recently been named in the CBI charge-sheet for the bomb blast in Ajmer Sharif in which several people were killed and many injured. But why are sections of the mainstream media doing the same? Is a writer with unpopular views more dangerous than a suspect in a bomb blast? Or is it a question of ideological alignment?