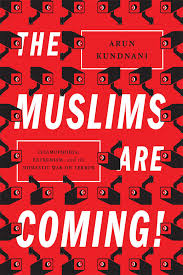 An edited version of this review was published at the Guardian. I like the Guardian’s books section and its G2 section, not least because they sometimes pay me to write. I also like some of their brave correspondents, such as Martin Chulov. What I don’t like at all is the idiotic, orientalist, conspiratorial, fact-free, and sometimes racist narrative against the revolutions in Syria and Libya which is so common in the Guardian’s comment sections. Blanket-thinking statist leftists like Seamus Milne and Jonathan Steele dominate, alongside ignorant polemicists like Tariq Ali. The last lines of my review target people like them, who are unfortunately influential in ‘liberal’ Britain. I am not at all surprised that the Guardian cut these lines from the review, although I name no names. These lines:  “….the new Islamophobia of sections of the left, the notion that US imperialism and ‘al-Qa’ida’ are in league to destabilise imagined ‘secular’, ‘resistance’ regimes. Those who defended Iraqi Islamists in the Blair years now point to the Allahu Akbar chant as evidence of an agenda far more benighted than that of the genocidal neo-liberal dictatorships.” (I just spoke to the good man who commissioned the piece. He says the issue was space in the print edition. Fair enough. But why cut the lines which apply to Guardianistas?)

Arun Kundnani’s “The Muslims Are Coming”, vastly more intelligent than the usual ‘war on terror’ verbiage, focusses on the war’s domestic edge in Britain and America.

Kundnani’s starting point is this: “Terrorism is not the product of radical politics but a symptom of political impotence.” The antidote therefore seems self-evident: “A strong, active, and confident Muslim community enjoying its civic rights to the full.” Yet policy on both sides of the Atlantic has ended by criminalising Muslim opinion, silencing speech, and increasing social division. These results may make political violence more, not less, likely.

The assumptions and silences of the counter-radicalisation industry end up telling us far more about particular ideological subsections of Anglo-American culture than they do about the Muslims targetted. The two dominant security approaches to Muslim citizens described by Kundnani – ‘culturalist’ and ‘reformist’ –focus on ideology rather than socio-political grievances.

Culturalism’s best-known proponent is Bernard Lewis, Dick Cheney’s favourite historian, who locates the problem as Islam itself, a totalitarian ideology-culture incompatible with democratic modernity. So Mitt Romney explains the vast divergence between Israeli and Palestinian economies thus: “Culture makes all the difference” – and decades of occupation, ethnic cleansing and war make none. Writer Christopher Caldwell believes residents of the Paris Banlieu rioted in 2005 because they were Muslims (although many weren’t), and not because of unemployment, poor housing, and police violence. Perhaps the silliest culturalist intervention was Martin Amis’s “The Second Plane”, where Amis breezily admitted he knew nothing of geopolitics but claimed authority nevertheless from his expertise in ‘masculinity’ – 9/11 was explained by Islamic sexual frustration. Such discourses are part of an influential tradition of silliness. In 1950s colonial Kenya, psychiatrist JC Carothers understood the Mau Mau uprising as “not political but psycho-pathological”.

More charitable than culturalism, reformism identifies the problem as a perversion of Islamic doctrine. With General Petraeus’s Iraqi ‘hearts and minds’ campaign, reformism came to dominate the post-Rumsfeld Pentagon; what started in counter-insurgency was soon considered as relevant to Bradford as Basra. It involved an accumulation of anthropological ‘knowledge’ through surveillance (David J Kilcullen describes counter-insurgency as “armed social science”), and it underlay the assumption of Obama’s 2009 Cairo speech that positive recognition of moderate Muslim culture could solve political conflict. Quran-reading Tony Blair shared the notion that terrorism’s “root cause… was not a decision on foreign policy, however contentious, but… a doctrine of fanaticism.”

This focus on doctrine meant the state intervened in doctrinal affairs like a mufti, promoting correct belief. Muslims were categorised as ‘extremists’ or ‘moderates’, although no link has been proved between extremist ideas and terrorist violence. The clumsy binarism went further – Salafis were extremist, Sufis were moderate – although most Salafis are quietists and some Sufis fight jihad against America. Those labelled moderate were quickly reclassified if they spoke out on foreign policy.

The focus on ideology led to the criminalisation of certain ideologies, and to the new crime of “glorifying terrorism” (as opposed to inciting violence). Increasingly, young Muslims were imprisoned for their reading matter. Thus the more liberal approach ended by assaulting liberal freedoms, and culture was transformed into a battlefield. By turning comparatively new (and by no means universal) values such as gender and sexual equality into icons of superior Westernism, “liberalism became a form of identity politics.” (Reformism is heavy with bleakly absurd contradiction. For the sake of cultural sensitivity in Ramadan, hunger-striking Guantanamo prisoners are force-fed only at night.)

In one of several illuminating character sketches, Kundnani shows that the radicalisation of Yemeni-American Anwar al-Awlaki, killed by drone in 2011, involved no psychological crisis or theological shift (as the reformist literature would have it), but only experience of the War on Terror, domestic and external, including his American-inspired arrest and abuse by Yemeni police. The preacher’s newly violent language mirrored not the Quran so much as War on Terror discourse itself.

This failure to engage with the real roots of violent alienation has ramifications going far beyond security. Both culturalism and reformism neglect what Kundnani calls “the basic political question thrown up by multiculturalism: how can a common way of life, together with full participation from all parts of society, be created?”

Those British Muslims who ‘ghettoised’ didn’t do so by choice but as a result of industrial collapse, discriminatory housing policies, and the fear of racist violence. Identity politics was promoted and funded by local government in response to a 1970s radicalism (for instance the Asian Youth Movements, modelled on the Black Panthers) which linked anti-racism to anti-capitalism. Home secretary Willie Whitelaw supported ‘ethnic’ TV programming on the grounds “if they don’t get some outlet for their activities you are going to run yourself into much more trouble.” Multiculturalism, then, was not a leftist plot but a conservative move bringing together the state and community ‘uncles’ against a much more subversive alternative. And in the last decade, while ‘anti-terror’ resources have flowed into Muslim communities, benefitting the usual gatekeepers and provoking the envy of equally deprived non-Muslim communities, young, alienated Muslims, as likely obsessed by the Illuminati as the Caliphate, are deterred from speaking – and being challenged – in public.

Kundnani provides detailed, well-contextualised accounts of the entrapment of vulnerable African-American Muslims as well as the criminalisation of the (already traumatised) Minnesota Somali community (for its opposition to the US-backed Ethiopian invasion of Somalia). Arab-Americans, who had either identified as white or as a ‘model minority’ (patriotic, bourgeois, less troublesome than Blacks or Latinos), suddenly found those options closing. In comedian Dean Obeidallah’s words, “I go to bed September 10th white, wake up September 11th, I am an Arab.” Anti-Muslim hysteria was whipped up by the media, the entertainment industry, and a state vocabulary which considered pipe bombs ‘weapons of mass destruction’ when used by Muslims. Anti-Muslim violence in America increased by 50% in 2010.

The book closes with discussion of the new European far-right’s embrace of Zionism and substitution of anti-Semitism with Islamophobia. In ‘creeping-shari‘a’ scaremongering, the tropes of classical anti-Semitism are clear. Rightists “…ascribe to Islam magical powers to secretly control Western governments while at the same time [seeing it as] a backward seventh-century ideology whose followers constitute a dangerous underclass.”

In Britain the EDL was born; in America a media-based Islamophobic campaign fed existent conservative movements. Both meet on varieties of the ‘Eurabia’ conspiracy theory, whereby a corrupt European political class has signed the continent over to Muslim domination through immigration, birth rates, and multiculturalism. At one extreme, this brand of ‘anti-terror’ politics soon arrives at its own, Anders Breivik-style terrorism.

Arun Kundnani is one of Britain’s very best political writers, neither hectoring nor drily academic but compelling and sharply intelligent. “The Muslims are Coming” should be widely read, particularly by those liberals who consider their own positions unassailable. “Neoconservatism invented the terror war,” Kundnani writes, “but Obama liberalism normalised it, at which point, mainstream journalists stopped asking questions.” He could go further to examine the new Islamophobia of sections of the left, the notion that US imperialism and ‘al-Qa’ida’ are in league to destabilise imagined ‘secular’, ‘resistance’ regimes. Those who defended Iraqi Islamists in the Blair years now point to the Allahu Akbar chant as evidence of an agenda far more benighted than that of the genocidal neo-liberal dictatorships.

One thought on “The Muslims Are Coming!”