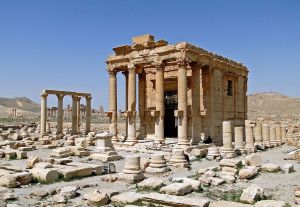 An edited version of this piece was published at the National.

Zabadani, a mountain town northwest of Damascus near the Lebanese border, was one of the first Syrian towns to be liberated from the Assad regime (in January 2012) and one of the first to establish a revolutionary council. (The martyred anarchist revolutionary Omar Aziz was involved in setting up this council, as well as the council in Barzeh). Zabadani has been besieged and intermittently shelled since its liberation. And since July 3rd this year it has been subjected to a a full-scale assault by (the Iranian-backed) Lebanese Hizbullah, alongside continuous barrel bombing. Apparently the town’s 800-year-old al-Jisr mosque has been pulverised. Human losses are in the hundreds, and beyond the numbers, incalculable.

In other news, Daesh (or ISIS) has bulldozed the 1500-year-old monastery of Mar Elian in al-Qaryatain and blown up the beautiful 2000-year-old temple of Baalshamin in Palmyra. The temple once mixed Roman, Egyptian and Mesopotamian styles. Today its rubble is further evidence that there will be no resumption of Syrian normality. The people, monuments, even landscapes that Syrians once took for granted, that they assumed their grandchildren would enjoy, are disappearing for ever.

Palmyra – Queen Zenobia’s desert city – is a world heritage site and perhaps Syria’s most precious cultural jewel. Remarkably intact until recently, it provided a tangible link to antiquity and a breathtaking proof of the region’s civilisational wealth. Nationalist Syrians, whether secular or Islamist, feel the importance of such sites for communal pride and identity. Rational Syrians can at least understand their utilitarian benefit to any future tourism industry.

Neither Bashaar al-Assad nor (Daesh ‘caliph’) Abu Bakr al-Baghdadi are nationalists. Al-Baghdadi is explicit about it: “Syria is not for the Syrians,” he says, “and Iraq is not for the Iraqis.” Al-Assad’s rhetoric is still nationalist (and sectarian), but his war effort is managed by a foreign power now pushing towards the nation’s partition. Though not nationalists, both are certainly fascists obsessed with reinforcing their respective totalitarian states and eliminating any independent intellectual influence. Thus, in a flesh-and-blood echo of its slaughter of Palmyran history, Daesh tortured and publically beheaded Palmyra’s head of antiquities, 81-year-old Khaled al-Assa‘ad, perhaps because he’d refused to reveal the location of hidden treasures.

When Daesh destroys Baal’s temple, when the regime destroys the Zabadani mosque (or Aleppo’s Umawi mosque, or Deraa’s Omari mosque), it’s as if fascist forces have destroyed Stonehenge, Westminster Abbey or the Tower of London, as if the British Library and British Museum have burnt. It declares a total rupture with the past.

Rebel groups too have assaulted Syria’s heritage, though on a smaller scale, either by looting sites to raise funds or by firing at them when the regime is ensconced within. With the questionable exception of (al-Qaida-linked) Jabhat al-Nusra, however, these groups at least want to preserve Syria’s territorial integrity.

Of course the borders are not sacrosanct. All borders are acts of the imagination, and the Sykes-Picot borders are more artificial than most. They were drawn by foreign imperialists – either clumsily or maliciously, according to your reading – and manifested an order in which minorities wielded power over majorities.

The dissolution of these false borders would of course be welcome if it implied a dissolution of repressive state structures (and foreign interference), and a corresponding empowerment of individuals and communities. It would be welcome if it ended the political exploitation of sect. But both Assad and Daesh offer the opposite, and neither of their projects can provide stability. At once a perverse reincarnation of Baathist tyranny and a homeland for international fantasists, the Daesh state is a temporary phenomenon, a parasite feeding on Assad’s war. And Assad’s shrinking state is an Iranian puppet; running low on Syrian manpower, it implements a foreign agenda.

This has never been clearer than today. When negotiations were held over Zabadani, the Islamist militia Ahrar al-Sham spoke on behalf of the rebels. Its interlocutor was not the Syrian regime, but the Islamic Republic of Iran. Ahrar hoped to win a mutual ceasefire from the negotiations – that Hizbullah stop attacking Zabadani, and the rebels in return stop attacking Fu’ah and Kafraya, pro-regime Shia towns in Idlib province. But Ahrar broke off talks when the Iranians demanded instead a population exchange – that Sunni residents leave Zabadani, and Shia residents leave Fu’ah and Kafraya.

Having failed to hold most of Syria, Assad and the Iranians aim now to retrench in an area stretching from the coast through Homs along the Lebanese border to Damascus. This is their version of what the French occupiers called ‘la Syrie utile’. The sectarian cleansing of strategic zones in this area began in 2013 (especially around Homs), and continues with the current assault on Zabadani and the increased aerial bombardment of the Ghouta suburbs of Damascus, already subjected to sarin gas, artillery barrages and two years of starvation siege. On August 16th, for example, barrel bombs murdered over a hundred people in a Douma marketplace.

It goes on day by day – Syria’s present, past and future dissolve, and the world participates in the tragedy. Britain reopens its embassy in Tehran. The UN sups with Assad. The US, long retreated from its anti-regime threats, bombs moderate Islamist opposition groups like Jaish al-Sunna as well as Daesh. Worse, it seems the Americans are using their involvement in the multinational operations centre in Jordan to hold back the Free Army’s Southern Front from victory in Deraa.

Zabadani, teetering on the edge of defeat and cultural annihilation, still holds out at the time of writing, even counter-attacking Hizbullah checkpoints. This at least exists in the present.