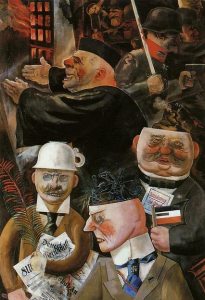 Throughout April, Leila and I spoke about Syria and our book Burning Country in the United States and Canada. Some audiences were large , some were small. A couple contained a preponderance of anarchists, a couple included people from the State Department. Some were academic, some were grassroots. One was entirely Syrian. Audience questions stretched from those informed by various conspiracy theories to those grounded in humanity, intelligence, and information.

We heard some strange things, but were only once confronted by a highly aggressive, profoundly ignorant and prejudiced white man. This was during our talk at Columbia University, New York. This character was the first to put up his hand after our presentations. He’d been glaring, particularly at Leila, throughout the talks.

He was almost spitting with anger. How could Leila describe Iran as a prime generator of sectarianism, he wanted to know, when everyone knew it was Saudi Arabia? He himself knew for sure that Syria’s 2011 protest movement was entirely made up of Sunnis, and that they were calling for the blood of the Alawis and Christians from the first day. He knew that all the Christians and Alawis and Druze had protested for Assad. He named a French commentator as evidence for this (Fabrice someone?), and expressed admiration for Patrick Cockburn, who I’d criticised in my talk.

And so he encapsulated some of the worst characteristics of this pro-fascist ‘left’ that has run so badly aground. The lack of detail, and useless binarism, of the Iran/Saudi comment; the orientalism and Islamophobia of the rest; the anger born of a sense of entitlement to narrate other people’s struggles; and the reliance on French and Irish commentators rather than on Syrian revolutionary voices. Neither Leila nor I claim to be Syrian revolutionary voices, but we have interviewed many Syrian revolutionaries, including many from Christian and Alawi backgrounds, who were part of the protest movement from the start. In my answer I mentioned them, and also towns like Yabroud, with a very high proportion of ‘religious minorities’, which liberated themselves from Assad’s forces and set up free local councils and Free Army militias instead. The angry man tutted and spat through my answer. At least two Syrian Christians were in the room, rolling their eyes as he spat.

Leila was disturbed by him. I told her not to dwell on it. The man was so emotionally overwrought he probably had mental problems, like so many in this city. But afterwards we learnt that the angry man is a Stalinist ‘intellectual’, that he writes for the ugly magazine Jacobin, and that his name is Daniel Lazare.