Anyone near Exeter should make sure to visit Making Light’s exhibition Stories from Syria (and visit the website). I wrote three small texts to accompany some of the art work. Here’s the first: 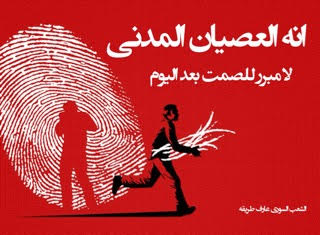 One reads: “It’s civil disobedience. No excuse for silence after today.”

A figure grabs lines from a thumb print, and runs. The thumb print evokes ID cards and the whole machinery of state. The figure is fleeing surveillance, therefore, and defining his own identity as he does so. Have those lines transformed into sticks in his arms? Is he about to light a fire?

The figure in the second poster is trapped inside a ‘no entry’ road sign, either dismantling it, and by implication the political prohibitions in Syrian society, or saying ‘no’ himself, refusing orders.

The words in this one read: “Civil disobedience. I don’t obey the law of an illegitimate 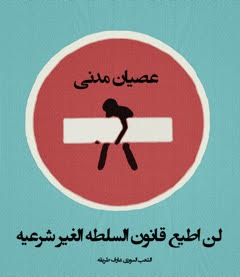 authority.” The sentence is a response to a regime poster campaign of the period. One of those official slogans read: “I obey the law.”

The revolutionary poster aims to force a dialogue where before there was only monologue. It answers back.

Before 2011, nobody answered back, at least not in public. Back then, veteran dissident (and long-term political prisoner) Riad al-Turk was entirely just when he called Syria a “kingdom of silence”.

Syrians were terrified to speak openly and honestly about domestic politics. Those who did either had to leave the country or were imprisoned for decades in the most brutal conditions. The state had ears and eyes everywhere, spies in every workplace, school and café. It owned all the tongues in the country, every newspaper, every radio and TV station. It decided which books were published and which films were shot. It dominated trades unions and universities and every last inch of the public space, even the graffiti on the walls.

In 2000, Bashaar al-Assad inherited power from his father Hafez. The new president’s neo-liberal (and crony-capitalist) economic reforms impoverished the countryside and city suburbs while excessively enriching a tiny elite. Rami Makhlouf, for instance, the president’s tycoon cousin, was estimated to control 60% of the national economy by 2011.

In the spring of 2011, Syrians refound their voices. Enmired in increasing poverty, rejecting the humiliations of unending dictatorship, lashing out against corruption, and encouraged by the Arab Spring uprisings nearby, they took to the streets.

The first protest was on February 17th in the Hareeqa market in central Damascus. It happened spontaneously after traffic police beat up the son of a local trader. 1500 people gathered chanting ‘The Syrian People Won’t Be Humiliated!’ The Interior Minister was quickly sent to the scene. “Is this a demonstration?” he asked testily. “No, no!” the men replied – but it obviously was.

That evening Syrians sat around their screens, many open-mouthed, wondering what it meant. It wasn’t a revolution, not yet, but it was certainly something entirely new.

If you’ve never lived under the rule of silence, it’s hard to understand how shocking it was to hear honest public speech and see open dissent for the first time. How provocative, life-affirming, frightening, and liberating.

The protests grew quickly. By March 15th thousands were gathering in simultaneous demonstrations across the country, in the central city of Hama, in Hasakeh and Deir al-Zor in the east, and in Deraa in the south. In the Damascus Old City, 200 people chanted “God, Syria, Freedom, and that’s all”, a play on the pro-regime slogan “God, Syria, Bashar, and that’s all”. They also shouted “Selmiyyeh, Selmiyyeh”, or “Peaceful, Peaceful”, a retort to the security forces and irregular militias who met them with fists, sticks and tear gas, and a slogan that would soon spread everywhere.

Deraa was one of the crucibles, Deraa the southern city where fifteen schoolboys, all under the age of fifteen, had been arrested for graffiting walls with the revolutionary slogans they’d heard chanted on Tunisian and Egyptian streets. In detention, the children were tortured, their fingernails ripped out. Several thousand family members and their supporters responded on March 18th by gathering in front of the city’s Omari mosque to demand the children’s release. Security replied with water cannon and live ammunition, killing at least four people. These were the first deaths of the uprising. The next day, the funeral for the victims turned into a mass demonstration chanting ‘He Who Kills His People is a Traitor.” The security forces killed still more people. In a tactic which would become routine, they occupied the nearby hospital, and shot or detained any wounded who arrived.

The repression escalated in the weeks and months that followed. The regime directed bullets at chests and heads, and practised mass detention, sexual assault, and horrific forms of torture. Thousands died under torture, even children, like thirteen-year-old Hamza al-Khateeb whose mutilated corpse was returned to his family. Hamza’s penis had been chopped off. He’d been repeatedly shot, stabbed, carved, and burnt before his death.

This barbarity only steeled the will of the protestors. On some Fridays, despite the very real risk of death, millions took to the streets. Local Coordination Committees sprang up in each neighbourhood. These were grassroots revolutionary bodies of just five to seven people each. They organised protests and discussion groups, and linked up with other neighbourhoods, villages and towns.

The protests brought together people from the full range of Syrian backgrounds, from every region, sect, ethnicity and class. There was a sense of national rediscovery. Towns previously unknown became iconic for their revolutionary activity. Cities long-brewed in mutual resentment celebrated each other in chants of solidarity. And Arabs chanted ‘Azadi’, the Kurdish word for freedom.

People sang and danced at the protests. They brought their own slogans, painted at home. Before, during, and after the protests they engaged in unprecedented discussion on absolutely everything. Cultural, spiritual, economic, social and political questions were asked. Everything was in question. Later they set up free newspapers and opened free radio stations.

For many months they still chanted “Peaceful!” They offered water and roses to the soldiers brought to kill them. They chanted “One One One, The Syrian People are One”.

They stood for freedom, social justice, and basic human dignity.

Many Syrians speak of their first protest as a moment of personal liberation. Here’s how ‘Joly’, an engineering student from Homs, describes hers:

“At first I was scared to join in. But one day there was a very big demonstration which came from two directions – from the old part and the new part of al-Wa‘er. When I heard the chanting – The People Want … – and the singing, I started crying. Suddenly I was filled with courage, and I picked myself up and walked out to join in. My mother tried to stop me, but I went anyway. It was a beautiful experience. I felt at last I was participating in the effort to lift the oppression off us. Before that I used to be scared to talk even in front of my friends. I even cheered for Bashaar at the university, during his first speech to the People’s Assembly. Can you imagine? It’s something I regret very much now.”

It was Riad al-Turk who called Syria a kingdom of silence. But this is what he said in 2011:

“Now the street has spoken. The young revolutionaries have spoken. Those who have created the events have spoken. It is the people who have emerged from their silence today, and undermined the walls of the kingdom of silence.”

One thought on “Civil Disobedience”