Just like the Gonu and Phet cyclones that hit the Sultanate in the last two years, corruption has united the Omani people once again. The protests that have spread all over the country turned into a huge campaign to ‘clean’ the country.

Public opinion has been fluctuating because of what the Omani TV describes as vandalism. People came out with new slogans now: “No corruption…No vandalism”. However, one can never ignore the greater picture; a picture of Omani citizens expressing themselves with no fear.

END_OF_DOCUMENT_TOKEN_TO_BE_REPLACED 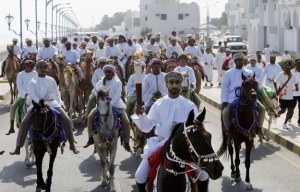 I did not see this coming, though I am fully aware of the unemployment rate, high prices, low salaries, lack of freedom of speech and corruption that has been flowing in the veins of the Sultanate. Omani people have watched the uprisings in the Arab world, and they have learned a valuable lesson from the Tunisian and Egyptian revolutions. The power of the people is so great that it can change the unbearable reality. According to the Oman News Agency, what happened yesterday and what is happening today all over Oman is a type of ‘vandalism’ though the protestors were chanting: “selmeyyah” (peaceful protests) all the time.

Let’s start from the very beginning. About 300 protestors gathered on Saturday in the Globe roundabout in Suhar, or what is known now as the ‘Reform Square’, to demand more political and economic reforms. This comes after the decrees issued by the Sultan and which did not meet the protestors’ demands for change. The result was that the police arrested 41 people to spread fear among the others. Of course that did not happen. The protestors were more determined to continue with their peaceful protests.

END_OF_DOCUMENT_TOKEN_TO_BE_REPLACED

To break up the winter I spent most of January visiting my brother-in-law and friends in Oman, where I used to live, and my sisters in Doha, Qatar.

Since Hamad bin Khalifa Aal Thani deposed his corrupt father, Qatar’s powerful oil and gas economy has expanded and diversified. The state follows an interesting and idiosyncratic foreign policy. It hosts the largest American miltary base in the Gulf, and it also hosts – against American and Arab objections – al-Jazeera. In terms of the regional ‘Resistance Front versus US-client’ dialectic, Qatar stands in the middle, and in 2008 it helped negotiate a Lebanese compromise between the two sides. Wahhabism is influential (my five-year-old niece wants to attend ballet classes, but ballet classes are banned because the costume is considered unIslamic – even for five-year-old girls in a man-free environment), yet women can vote and drive.

Overall, I don’t much like the place. I had a good time with my family, ate some fine meals, went to a book fair. But there’s a bad power game going on in Qatar. Nobody is smiling. I met some very pleasant Qataris – the staff in the excellent Islamic Art Museum, some men in a bowling alley, a retired pearl diver – but I also noticed many refusing to descend from their cars at the grocery shop. (Arabs often expect take-away food to be brought to the car, but not groceries.) Expatriates form a majority of the population. As elsewhere in the Gulf, expatriate wage and class status can be mapped reasonably smoothly onto ethnicity, with white Westerners on top, followed by Lebanese, then other Arabs, then Indonesians, Pakistanis and Indians. Expatriates don’t have citizenship rights, although the infrastructure depends on them. Many contemporary Qataris, in contrast to their proud grandfathers, are obese. The city is one of close walls. The surrounding desert is flat, pale, and begrimed by industry.