This was first published at the National. 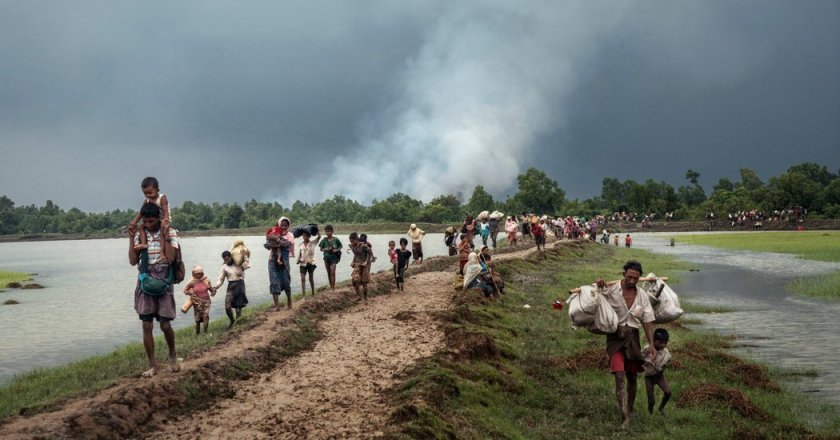 The Rohingya Muslims are currently the world’s most persecuted minority. Since last year at least 625,000, over half the total population, have fled slaughter in Myanmar (also known as Burma). This is only the latest wave in a series of killings and expulsions starting in 1978. The UN calls it a ‘textbook example’ of ethnic cleansing.

Two recently-published books provide necessary background to the Rohingya tragedy. Francis Wade’s “Myanmar’s Enemy Within: the Making of a Muslim Other” contextualises events politically and historically. Azeem Ibrahim’s “The Rohingyas: Inside Myanmar’s Genocide” covers similar ground while, as the title suggests, convincingly arguing that Myanmar “stands on the brink” of genocide,  a crime defined by the UN as the “intent to destroy, in whole or in part, a national, ethnical, racial or religious group.”

The Rohingyas have been designated as ‘Foreigners’ since 1978. The Myanmar state today describes them either as Indians imported by the British or as recent illegal immigrants from Bangladesh. Both books dispute this revisionism. Ibrahim begins Rohingya history as far back as 3,000BCE, when Indo-Aryan people arrived in what is now Arakan (or Rakhine province), while Wade presents evidence of an 11th Century CE Muslim community composed of stranded Indian, Arab and Perisan sailors.

Ibrahim’s account of ancient and colonial history is the most detailed. Rohingyas lived alongside Rakhine people who were connected linguistically and religiously to the Burman, the dominant ethnicity in today’s Myanmar. Though Arakan was influenced by the ancient Burmese kingdom, it wasn’t conquered until 1784. Over the next four decades 30,000 Muslims fled Burmese-Buddhist rule, until the British annexed Arakan in 1826. Burma – with Arakan and its Rohingyas attached – won its independence in 1948.

The Rohingyas entered the new state at a disadvantage. Their loyalty to the British during the 1942 Japanese invasion had sparked conflict with the Rakhine. Nevertheless they participated in national life. Some joined the army and others served in parliament. They were included as an ethnic group in the 1961 census.

In 1962 Myanmar’s military seized power. At this point Wade’s book takes the lead in describing the rage for national homogeneity motivating these Burman generals, in a country where minority groups make forty percent of the population. The army waged wars to subdue the Shan, Kachin and Karen peoples, amongst others. In the 1960s, it expelled Indian and Chinese residents.