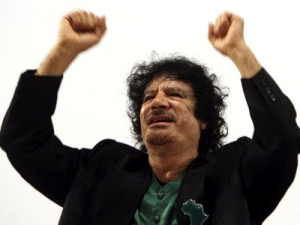 This review of Annick Cojean’s book was published at NOW.

The Arab world is still crammed full of tyrannies self-labelling with terms such as ‘popular’ and ‘democratic’, sectarian regimes pretending to be secular, reactionary regimes describing themselves as progressive, and ‘resistance’ regimes which resist nothing but their subjects’ life and freedom.

The current post-revolutionary chaos in Libya provokes two orientalist responses: the crude (statist-leftist) version, that the uprising was a foreign conspiracy; and the subtler (because it’s never quite made explicit), that the Libyans made a terrible mistake by rising, because their fractious ‘tribal’ society can only be held together by a strong man of Qaddafi’s calibre. After him, goes the implicit argument, the inevitable deluge.

“Gaddafi’s Harem” by French journalist Annick Cojean provides a fact-based corrective to those fooled by Qaddafi’s illusions, specifically those impressed by the radical feminist image evoked by his once highly visible – and sexily transgressive – corps of ‘Amazon’ body guards. It will change the minds too of those who saw the dictator from a distance as a lovable buffoon.

His regime was capricious, yes, at times even darkly comedic, but it was based on undiluted sadism. The cramping stagnation it imposed for 42 years, and the fact that it refused to budge except by force of arms, are the prime causes of today’s anarchy. The means of domination it employed – psycho-social as much as physical – tell us a great deal about the universal megalomaniac personality, as well as certain cultural weaknesses in the Arab world and beyond.