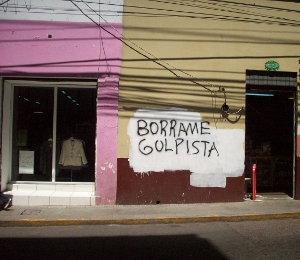 At one point during the military coup in Honduras last year, a US representative to the Organization of American States (OAS) joked that Hondurans were living in a state of “magical realism”, a folkloric literary genre blurring reality and the surreal, often in the historical or political context of Latin America.

He wasn’t far off, despite the bizarre comparison: A democratically-elected president is overthrown by an elite conspiring against him, forced out of the country, the military takes over, the people revolt in massive opposition, while governments across the world refuse to recognize the new regime and withdraw their ambassadors. Only the United States, the most powerful of all countries, remains on the fence, then hops off onto the side of the golpistas (coup-makers) while presenting a straight face of diplomacy.