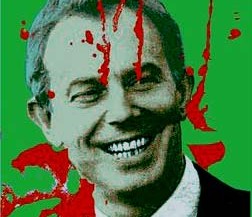 I didn’t watch Blair’s performance at the Chilcot inquiry, for health reasons, but I did read that he mentioned Iran 30 times, as in ‘the same good case for war applies to Iran’. This comes in the context of America concentrating ships and missiles in the Gulf. It is unlikely that the US will attack Iran directly, but increasingly likely that Israel will provoke a conflict. Blair may be preparing the ground for this.

Blair felt ‘responsibility but no regret’ over the destruction of Iraq which has killed over a million, created at least four million refugees, and turned a fertile land into a diseased desert. He focused on Saddam Hussain’s monstrosity, but refrained from explaining how Saddam’s most monstrous crimes were supported by his Western backers. He was allowed to refrain. He didn’t entertain the possibility that Hussain could have been deposed in other ways. He blamed Iran and al-Qa’ida, neither of which had a presence in the country before its collapse, for Iraq’s problems, and again his illogic was not questioned.

END_OF_DOCUMENT_TOKEN_TO_BE_REPLACED

The Iraq war was driven by the neo-conservative, Israel firsters, as the beginning of a plan to reshape the Middle East in Israel’s favour. In the Independent, Richard Ingrams explains that by having at least two Zionists, on a committee of five, the Iraq war inquiry is unlikely to explore this.

For more on Freedman and Gilbert see Michael Crick’s Newsnight blog where he opines that “critics of the war might argue Sir Lawrence was himself one of the causes of the war!”

Sir Martin Gilbert, the allegedly distinguished historian who is one of those appointed to investigate the Iraq war, has let it be known that one day in the future Bush and Blair might be seen in the same light as Roosevelt and Churchill. A good example of the rule that when it comes to talking nonsense it’s hard to beat a historian.