An important new report from the Stanford and New York University law schools finds drone use has caused widespread post-tramatic stress disorder and an overall breakdown of functional society in North Waziristan. In addition, the report finds the use of a “double tap” procedure, in which a drone strikes once and strikes again not long after, has led to deaths of rescuers and medical professionals. Follow the conversation #UnderDrones 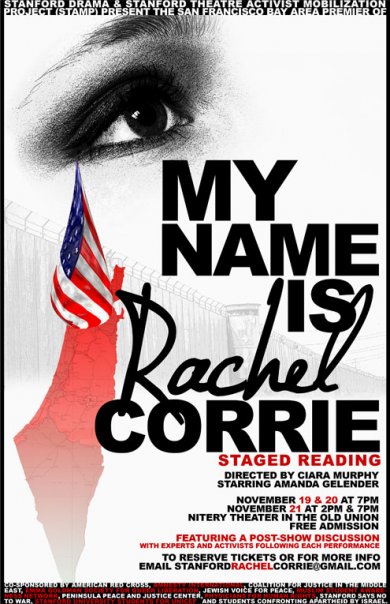 I attended opening night and along with a sold-out audience was struck by the poignancy of the play and Amanda’s subtle and deeply moving performance. Rachel Corrie was a 23 year-old American woman who traveled to Gaza in 2003 during the Second Intifada. She was killed by a Caterpillar bulldozer driven by Israeli Defense Forces as she attempted to prevent the IDF from demolishing the home of a Palestinian family. My Name is Rachel Corrie consists entirely of words written by Corrie herself, recorded in diary entries and emails from Rachel’s early childhood until a few days before her death. Gelender breathes vivid life into Rachel’s words, which themselves reveal the keen sensitivity and eloquence of a poetic nature.

Amanda Gelender, the lead and visionary behind this production, had been waiting to obtain the rights for the play for nearly two years. But obtaining rights is not always the only hurdle to securing a production of Rachel. Since its London premier in 2005, several professional American and Canadian theaters have seen their efforts to mount a production of this one-woman show quashed by vigorous opposition from powerful forces.  The charge is always the same: the play is anti-Semitic. Gelender’s successful production reflects the changing tide that is occurring within the American public’s relationship to Israel and anti-Semitism.