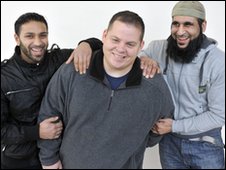 The BBC recently arranged a meeting between Brandon Neely, a former Guantanamo Bay guard, and two former Guantanamo detainees, Shafiq Rasul and Ruhal Ahmed. Both Rasul and Ahmed were released from Guantanamo in 2004 after being detained there for two years. Back then, Ahmed, Rasul and Neely were all 22 years old.

Neely served as an officer at Guantanamo for 6 months before leaving to serve in Iraq. Having quit the army in 2005, Neely admits that it was only after he left the military that he began questioning the government’s claim that prisoners at Guantanamo constituted the “worst of the worst”.

The decision to meet came about as a result of Facebook, which Neely used in order to get in contact  with Rasul and Ahmed early last year. Upon receiving a message of apology from Neely, Ahmed explains:  “At first I couldn’t believe it. Getting a message from an ex-guard saying that what happened to us in Guantanamo was wrong was surprising more than anything.”

END_OF_DOCUMENT_TOKEN_TO_BE_REPLACED

In a notification filed on December 30th in a U.S. District Court for the District of Columbia, the Justice Department has announced that in addition to shifting prisoners from Bagram to a newly built facility nearby, the Pentagon also intends to demolish the original facility at Bagram.  According to the notification, the Department of Defense will shift prisoners to the new facility by January 19th.  Shortly thereafter, plans to demolish the Bagram facility will be put into effect.

According to an article in the Huffington Post on December 31st, Ramzi Kassem – a lawyer serving as counsel for several Guantanamo and Bagram detainees – has stated that the plan to demolish Bagram “amounts to destroying evidence in the cases of detainees who say they were tortured there.”

Kassem, also a law professor at City University of New York, maintains that Bagram ought to be preserved as evidence and as a crime scene. In Kassem’s view, the administration’s decision to demolish the facility  can be read as an  “underhanded attempt” on the part of a government concerned with “covering its own tracks.”