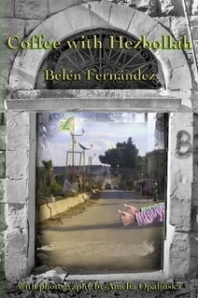 Here’s a strange and sparkly, jumpy and tightly-packed little book by PULSE’s own Belen Fernandez, in which our heroines (Belen and the photographer Amelia Opalinska) hitch-hike through Lebanon and Syria a few weeks after the war of summer 2006, consuming far more caffeine than is good for them.

Beyond Gonzo, it doesn’t pretend to be journalism at all. Instead it recounts a fairly lunatic, fairly random sight-seeing tour towards ‘the dark force’ Hezbollah. The setting, of course, is an Israeli-devastated landscape, and the ‘dark force’ tag, like all the book’s other appropriations of mendacious political language, is ironic. “Coffee with Hebollah” is, as Norman Finkelstein writes in his recommendation, “simultaneously serious and silly.” It’s also quick witted and very well informed, sensitive to the discourses and stereotypes of Lebanon’s 18 sects, the country’s tortured history, as well as the fantastic representations of Lebanon that have emerged from Israeli and Western power centres. This makes the book a new kind of journalism as well as a parody of the mainstream version.

The satire is harsh, and nobody escapes the treatment, including the author. The absurdity of the material is pointed up further by the mock-formal language of negotiation and diplomatic report in which encounters are narrated, the supposedly transparent language of perfect sense. So, for instance, labelling somebody by sect is described as conducting  an “exhaustive religio-spatial analysis.” Such phrasing mirrors the pompous pretensions of the thinking it describes. There is also a great deal of translation comedy, natural territory for irony, which lies in gaps, in the distance between reality and representation.

Behind Lebanon lies a memoried backdrop of travels in Cuba, Mexico, Italy, Switzerland, Turkey, and Belize, and incidents in these locations which prove idiocy to be international. The tone is one of easy cosmopolitanism, hence the lack of embarrassment over translation gags, and the gift for bringing out people’s prejudices. (Although in Lebanon you don’t need to work hard to elicit prejudice. Here’s a good local line: “We are all Lebanese but the Muslims are like rabbits.”)

But the satire is as affectionate as it is devastating. It homes in not only on the comically boneheaded but also on the strange complexity of peoples’ lives and allegiances. The benefit of hitchhiking, and of fleeing from hotels, is the close proximity to others it imposes. Observation at such close quarters, and Fernandez’s sharp eye for detail, militate against the cheap labelling common to sectarian, Zionist and imperialist discourses. Fernandez notices, for instance, that a Druze shaikh “had decorated his living room walls with collages of the Dalai Lama.” From social fractures and petty chauvinisms she discerns a humanity united by its fallibility and its sudden enthusiasms. To exemplify the latter we have Erol the Turkish philosopher-architect who, horrified by Cuban diet, declares, “without bread and cheese there cannot be life!”

The danger of unrelenting irony is that it can result in an affectless and flat simulation of reality in which at a certain point everything seems hollow, and nothing therefore matters. Fernandez avoids this, firstly by her humanity, secondly by knowing when to ease off. In the following, fairly typical passage, the situational irony (not invented by the writer) is noted. After that: silence.

“Israel had launched two missiles into an apartment building in Chiyah that summer after an invisible enemy nearby had fired at an Israeli unmanned aerial vehicle. The apartment building had not been unmanned, resulting in the loss of 63 civilians.”