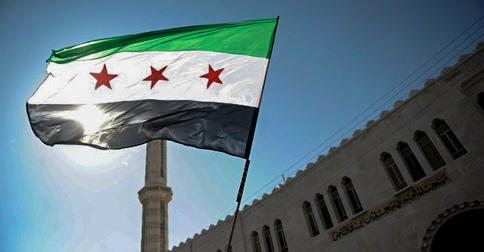 The responses of most leftists to the Syrian uprising and subsequent war (it’s often forgotten that it started as an uprising — indeed a nonviolent and nonsectarian one) have been deeply disappointing. Disappointing to many Syrian activists, and to many of us on the Left who support the Syrian struggle for dignity and justice, which is now a struggle against both Assad’s killing machine and the jihadi counter-revolutionary forces.

The first camp, while relatively small, represents a truly hideous, morally obscene and, I would argue, deeply reactionary position – siding with a mass murderer and war criminal who presides over a quasi-fascist police state.

The second camp, which encompasses a majority of peace activists and soi-disant anti-imperialists in the West, represents an (ironically) Eurocentric/US-centric stance (it’s all about the West, not the Syrian people) — a total abandonment of internationalism.

The third camp is at least understandable, given the complexity of the Syrian conflict. The book I co-edited on the subject is titled The Syria Dilemma for a reason. Yet this stance remains disconcerting: silence in the face of what UN Secretary-General Ban Ki-moon calls “the biggest humanitarian and peace and security crisis facing the world” is a cop-out. Complexity is not a gag order.

There is a fourth camp, however: a small but growing group of progressives who embrace the goals of the Syrian revolution. There are several shades within this camp – it includes Marxists, pacifists, feminists, Third Worldists and leftists of various sorts. Some support the armed struggle in Syria, others do not, standing instead with the nonviolence activists in Syria. But what unites this camp is its solidarity with the Syrian struggle for dignity, justice and self-determination.

The body of writings and arguments this camp has produced directly challenge the dominant narratives on the Left about Syria and offer a critical alternative to it. Here, collected in one place, are some of the key texts of this dissident left camp. Emphasis on some of the key texts – this list is by no means exhaustive. It’s limited to English-language sources. We offer it here as a living resource, one that is expanding on a daily basis. (If you have suggestions for other texts, please post them here.) Here ’tis (in no particular order):

Firas Massouh
Left Out? The Syrian Revolution and the Crisis of the Left

Mohammed Al Attar
What Kind of Support Do Syrians Want?

Solidarity With the Syrian Struggle for Dignity and Freedom

Muhammad Idrees Ahmad
On Monsterphilia and Assad: The problems with the “anti-imperialist” position on Syria
Why Bosnia is a better analogy than Iraq in the Syria debate
Syria and Surrealism
What is to be done about Syria?

Afra Jalabi
Streams of Light: The Heroic Struggle of the Syrian People
Anxiously Anticipating a New Dawn: Voices of Syrian Activists, in The Syria Dilemma (not available online, alas — but get the book)

Palestine Must Stand in Solidarity with the Syrian People

Mohja Kahf
Then and Now: The Syrian Revolution to Date — A young nonviolent resistance and the ensuing armed struggle
Syria: It’s Still a Revolution, My Friends
Lack of U.S. Peace Movement Solidarity with Syrian Uprising and the “No Good Guys” Excuse

Danny Postel
Mission Accomplished? Syria, the Antiwar Movement, and the Spirit of Internationalism

Max Blumenthal
The right to resist is universal: A farewell to Al Akhbar and Assad’s apologists
‘We Just Wish for the Hit to Put an End to the Massacres’: a report from the Zaatari refugee camp

Syria and the Left–a conversation between Max Blumenthal & Danny Postel

Talal Alyan
Shell Shocked and Rouged: Syria Is Not a Disposable Bride
While you were neutral about Yarmouk
Yarmouk: an unnerving silence about the ongoing siege of a Palestinian camp in Damascus

Rana Issa
The Destruction of Syria: In Memory of Edward Said

Thomas Pierret
No Stability in Syria Without Political Change

Wendy Pearlman
On the Third Anniversary of the Syrian Uprising
Intervening Against Assad: Reflections From Syrian Refugees
Love in the Syrian Revolution

Mary Kaldor
Bordering on a new World War 1
What to do in Syria?

Richard Falk
What Can Be Done About Syria? Tragedy and Impotence
On Syria: What is to be done?

* Above image: Syrian flag flutters during an anti-regime protest, by Freedom House (CC-by-2.0)