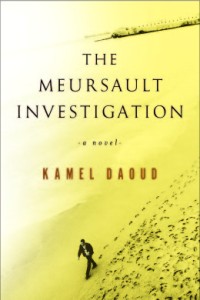 This review appeared at the Guardian.

In “The Outsider”, Albert Camus’s iconic tale of alienation, ennui and ruthless honesty, the anti-hero Meursault murders an Arab on the beach at Algiers simply because the sun gets in his eyes. “The Meursault Investigation”, Algerian journalist Kamel Daoud’s first novel, winner of the Goncourt prize and from now on an indispensable companion to Camus, is narrated by the brother of the murdered Arab.

In a frame reminiscent of Mohsin Hamid’s Reluctant Fundamentalist, the tale is told in a bar in Oran, “a city with its legs spread open towards the sea,” and addressed one-sidedly to a Western literature student. The narrator intends to construct his own story by using “the murderer’s words and expressions” like the “stones from the old houses the colonists left behind.”

According to him, the dead Arab in Camus’s book was “a brief Arab, technically ephemeral”; nameless, he “had the name of an incident”. But now we learn his name – Musa, a Moses bearing a text on his back (“The Outsider” instead of the Ten Commandments). The narrator, his brother Harun (Aaron), pays homage to, critiques, summarises, analyses, refutes, echoes, quotes and competes with “The Outsider”, and other Camus texts too. In reference to “The Myth of Sisyphus” Harun speaks of “the absurdity of my condition, which consisted in pushing a corpse to the top of a hill before it rolled down, endlessly.”

All this of course wields symbolic power. Harun is an ur-Algerian reflecting on colonialism, the legacy of thousands of Meursaults and their callous indifference to Arab life. In that sense the novel contains a definite element of the empire speaking back. Yet the narrator rejects simplistic anti-colonial allegorising. “A few decades ago,” he says, “I would have served you up the version with the prostitute slash Algerian land and the settler who abuses her with repeated rapes and violence.” But Harun has since witnessed “the post-Independence enthusiasm consume itself and the illusions collapse.” The liberated capital looks like “an outdated actress left over from the days of revolutionary theatre” (the novel overbrims with such unsettling female images).

The latter half of the story develops a specifically Algerian version of the absurd condition, a commentary on post-colonial failures. Harun inherits the Frenchman’s guilt when he commits a second murder, in reverse mirror image of Meursault’s. He isn’t dazzled by the sun like Camus’s anti-hero, but acts under a luminous moon, and he kills at two in the morning, not the afternoon. His victim is a Frenchman (with a name) and the crime is therefore a perverse kind of restitution for his brother’s death. Yet still he must be held to account, and is interrogated by the victorious anti-French fighters. The problem is the timing of the murder immediately after Independence; if he’d killed the Frenchman during the War of Liberation “which stifled rumours of all other crimes”, he’d have been considered a national hero.

This episode refers to the July 1962 massacre of Europeans in Oran, which echoed in turn the October 1961 massacre of Algerians in Paris. Collusion of the media and political class in both countries meant the reports of these atrocities were silenced – their victims officially forgotten – for decades. Then in the 1990s Algeria devolved into civil war between Islamists and the miltary regime. Once again all other crimes were stifled by the noise of two competing causes.

Harun finds his victim “wedged between two stories and some walls”, and the novel constantly plays between imprisoning dualities – French imperialist or Algerian nationalist, French or Arabic, man-written or God-written, Meursault or Harun.

“The Meursault Investigation” rejects the binary choice usually offered Algerians, between militarised nationalism or religious internationalism, condemning both as meaningless. “Arab-ness is like Negro-ness,” Harun says, “which only exists in the white man’s eyes.” And where Meursault is visited by a priest, Harun is hounded by “a whole pack of religious fanatics.” The Quran – like “The Outsider” – is another text subject to critique, and Algeria’s increasing religiosity is targetted for invective.

Unsurprisingly, an obscure Islamist preacher has called (via Facebook) for the Algerian government to publically execute Daoud for his “war against God and the prophet.” Exhibiting the necessary heroism of an Arab-world writer, Daoud refuses to leave Algeria despite the threats. His Harun, meanwhile, becomes an ‘Arab’ (even if the word’s been forced between commas existential hero, crying out “that I’m free, and that God is a question, not an answer, and that I want to meet him alone, at my death as at my birth.”

Along with the philosophy comes superlative writing, beautifully translated from the French by John Cullen. Where Camus’s vision is cold, stripped of emotion, Daoud’s is sensuous, comical and passionate. The novel’s opening line – “Mama’s still alive today”, as opposed to Camus’s “Mother died today” – signals some of the attitude of this audacious project. The theatrical monologue is sometimes Becketian, sometimes (in its intricacy, inter-textuality and self-referentiality) Borgesian, and always brilliantly metaphorical. For its incandescence, its precision of phrase and description, and its cross-cultural significance, “The Meursault Investigation” is an instant classic.