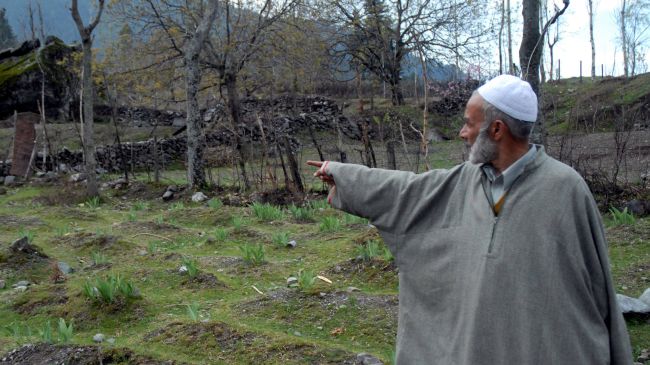 “Prominent writers in India are collectively protesting what they consider an increase in hostility and intolerance, which they argue has been allowed to fester under the government of Prime Minister Narendra Modi, by returning a prestigious literary award.”

Referring to attacks against Muslims, including the killing of a man who had been suspected of slaughtering a cow, he said, “This is not the country that our great leaders had envisioned.” (Ghulam Nabi Khayal, Sahitya Akademi Award, 1975)

The newsfeed on most South Asian social media has been deluged by articles like the one in The New York Times above. However, one has to wonder what kept these literary “stars” from this praiseworthy gesture of returning their State-given awards when the Gujarat pogroms were going on in 2002, or against the pogroms that followed the demolition of Babri masjid in 1992/3, or against the genocide of Sikhs around 1984, or heck, against the ongoing genocide in Indian Occupied Kashmir or that of Dalits…
My apologies for this query, which despite seeming cynical at first blush, is actually a probing of the very problematic and exceptionalizing notions of “India as a nation” and “Indian secularism” that these authors and poets valorize, explicitly or implicitly, through this joint gesture of returning their awards or through their separate oeuvre at large. It is precisely these twin concepts of unprobed “Indian secularism” and even more foundationally, the unproblematized, dehistoricized, and normalized idea of “India as a nation” (see The Indian Ideology (2012) by Perry Anderson for a resounding deconstruction of this) that are the fecund incubating grounds of much violence – violence which is Brahminical, colonial, and Islamophobic at the core. This is true not only with regard to the acts of spectacular violence, like the mob lynching of Muhammad Ikhlaq in the current context of Dadri, at the contemporary moment of Modi-fied India, but also for the billion and one banal acts of quotidian casteist, colonial, and communal violence that fertilize the roots of the phenomenon in modern India. This is especially true for the comparably spectacular violence of the allegedly “secular” contexts – the genocidal violence of the Indian state in Kashmir, Punjab, Hyderabad, Assam, Manipur, Jharkhand, Chhattisgarh, in every Dalit basti et al – that preceded the current Hindutva regime (and co-exist at any given time). In fact, it can be argued that the exceptionalization of India not only papers over much of this epistemic violence by making it invisible but actually enables it by helping it elide scrutiny. Thus no gesture of protest, however “well intentioned” it might be, will bear fruit until and unless the very problematic exceptionalism that undergirds the allegedly “secular India” is deconstructed.
The “secularism” of India is easily deconstructed to reveal its Brahminical, colonial, and Islamophobic impulse. Its paradigmatic failure is in Kashmir. India has long sought to bolster its “non-Hindu” secular credentials on the backs and mass graves of freedom-loving Kashmiris. Kashmir is paraded as the “Muslim majority state” that “opted” for India “instead of Pakistan,” deliberately obfuscating facts to the contrary. The hollowed-out “democracy” as imposed on Kashmir, abundantly littered with the rubble of fudged elections, a population blackmailed into voting, and pimpish collaborators, is nothing but a facetious mask to disguise the ongoing genocidal Occupation and colonization. (And yet, most left-liberal Indians go on taking pride in “the largest democracy of the world,” especially if it can be leveraged against the Muslim-majority neighbors.) Modes of governmentality honed over millennia on Dalits, including naked parades, sexual torture, forced feeding of feces and other excreta, rapes, massacres, and arson, are deployed on recalcitrant Kashmiris fighting for our collective right to self-determination. India’s colonial genocide in Kashmir is marked by Brahminism as well as by Islamophobia. The latter comprises bans on eating beef (it being a major source of animal protein for the poorest in South Asia, as well as being the cheapest animal for the obligatory sacrifice on the Eid al-Azha), frequent bans on the mandatory Friday prayers at some of the largest and most popular Jama’a Masjids, internet bans on Eid days, torture via forced sloganeering of Brahminical Hinduism’s chants, and the selective targeting of Kashmiri Muslims in the entire Jammu & Kashmir under Indian Occupation, as well as in India itself. So ironically India’s secularism fails precisely and fully at its much-trumped out test case: Kashmir. And on all three charges: Brahminism, colonialism, Islamophobia.

This is a “secularism” that allows and encourages a de facto genocide of the Dalit-Bahujan & Adivasis (despite strict laws on the books) via its Brahminical state apparatus. This is a “secularism” that allows, encourages, and rewards a de jure genocide of Kashmiris, Manipuris, and Nagas et al via explicitly colonial (and Brahminical) laws like AFSPA, PSA, etc. designed and deployed via its colonial state apparatus. Of course, these genocides are deeply imbricated in the increasing capitalism of the Indian society and its rapacious plunder of labor and resources, akin to the USA’s capitalism being inescapably intertwined with slavery and settler-colonialism.

So returning back to the dissenting authors and their protests… There’s a saying in Farsi that made its way into Urdu: der āyad, durust āyad, or better (arrive) late than never. However, in this particular case, one has to ask: is this even an arrival? (In other words, you have way further to go…)