A slightly edited version of this article was published at al-Jazeera.

In solidarity with Aleppo, the lights on the Eiffel Tower were extinguished. Elsewhere in Paris, and in London, Amsterdam, Oslo and Copenhagen, people demonstrated against the slaughter. Turks rallied outside Russian and Iranian embassies and consulates in Istanbul, Ankara and Erzerum. The people of Sarajevo – who have their own experience of genocide – staged a big protest.

The protests are nothing like as large as they were when the United States bombed Iraq, but they are welcome nonetheless. If this level of support had been apparent over the last six years, it would have made a real difference. Perhaps it is making a difference even now. Public sympathy for the victims may have pressured Vladimir Putin to allow those in the surviving liberated sliver of Aleppo to evacuate rather than face annihilation. At the time of writing, the fate of the deal is in doubt, subject to the whims of the militias on the ground. If it works out and the tens of thousands currently trapped are allowed to leave – the best possible outcome – then we will be witnesses to an internationally brokered forced population transfer. This is both a war crime and a crime against humanity, and a terrible image of the precarious state of the global system. The weight of this event, and its future ramifications, deserve more than just a few demonstrations. 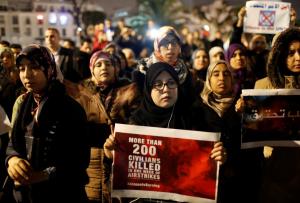 democratic revolution. It exposes the failures of the Arab and Muslim worlds, of the West, and of humanity as a whole.

Many Syrians expected the global left would be first to support their cause, but most leftist commentators and publications retreated into conspiracy theories, Islamophobia, and inaccurate geo-political analysis, and swallowed gobbets of Assadist propaganda whole. Soon they were repeating the ‘war on terror’ tropes of the right.

The Obama administration provided a little rhetorical support, and sometimes allowed its allies to send weapons to the Free Army. Crucially, however, Obama vetoed supply of the anti-aircraft weapons the Free Army so desperately needed to counter Assad’s scorched earth. In August 2013, when Assad killed 1500 people with sarin gas in the Damascus suburbs,  Obama’s chemical ‘red line’ vanished, and the US more or less publically handed Syria over to Russia and Iran.

Keeping to the ‘war on terror’ framework, the US bombs ISIS and others in Syria, hitting symptoms rather than the cause of the crisis. Europe, meanwhile, declares a crisis over the refugees arriving on its shores. So long as Assad remains in power, most of these refugees will not return home.

As for the Arab states, a combination of sectarianism, Iranian domination, and counter-revolutionary fervour led several to collude in Assad’s war. Others supported elements of the opposition, but in a disorganised and tepid manner.

The tragedy has also exposed the weaknesses of Syrian society, vulnerabilities which Assad so cleverly manipulated. By organising massacres (particularly in 2012, on the plain between Homs and Hama), by releasing Salafist-Jihadists from prison even as he tortured and killed thousands of democratic activists, then by inviting in foreign Shia militias, Assad engineered a sectarian breakdown. Too many Syrians fell too easily into his trap. When, for instance, Zahran Alloush – founder of Jaish al-Islam and himself a beneficiary of Assad’s prison amnesty – called for Damascus to be “cleansed of Shia influence”, he played right into Assad’s hands.

Yet the revolution exposed strengths which Syrians didn’t know they possessed. Communities held elections and organised themselves in local councils. They set up women’s centres, independent trades unions and free radio and TV stations. Aleppo was by far the largest centre of such civil society initiatives.

It’s not surprising when conservative states allow a revolution to drown. It’s more shocking that they stand idle as Arab sovereignty collapses.

Assad lost the war he provoked. By September 2015, when the Russian bombing started, his depleted army held less than a fifth of the country.

He calculated correctly, however, that powerful friends would come to his aid. When Russia arrived it employed the usual excuse – the ‘war on terror’, in this case on ISIS – but less than 20% of its bombs fell anywhere near ISIS. Instead its planes focused relentlessly on eviscerating the Free Army, as well as the civilian infrastructure in liberated areas. They burnt schools, hospitals and markets. They dropped cluster munitions, incendiary bombs and bunker busters – banned in civilian areas – on residential blocks. These too are war crimes.

80% of the ground forces surrounding Aleppo are not Syrian. Most are Shia jihadists from Lebanon, Iraq, Afghanistan and Pakistan, funded and trained by Iran. As well as these proxies, Iran has its own Islamic Revolutionary Guards Corps in theatre, often commanding Syrians. In Iraq too, the sectarian Popular Mobilisation Units are under IRGC command. In Lebanon, the Iranian-inspired and funded Hizbullah dominates.

Iranian expansionism accompanies the sectarian/political cleansing of areas of Homs and Damascus as well as Aleppo, creating demographic changes which won’t be reversed by another consignment of Grad missiles.

Victory for Assad is also a victory for ISIS. As Aleppo was being subjugated, ISIS retook Palmyra. Video evidence suggests it captured vast stores of weaponry including MANPADS and over 30 tanks. Meanwhile in rebel-held Idlib province, alongside large demonstrations waving revolutionary flags, there were smaller – and very unusual – protests in support of ISIS. For increasing numbers of Syrians, beset by sectarian forces, the nihilist narrative is making sense.

None of this stays in Syria. So how do the Arabs respond? Hamas organised a protest in Gaza, Kuwaitis demonstrated outside the Russian embassy, and Qatar cancelled its national day celebrations. It’s not nearly enough.

With good reason the revolutionary thinker Yassin al-Haj Saleh wrote of the ‘Palestinisation’ of the Syrian people. 68 years after failing to defend Palestine, Arab states have proved incapable of defending Syria from Russian, Iranian and ISIS occupation. They have, however, taught a repeat lesson to their subjects – that sovereignty is meaningless without democratic control. This imperative, which galvanised the 2011 revolutions, is today more relevant than ever.

5 thoughts on “The Palestinisation of the Syrian people”